The Halos Must Buy Out Vernon Wells 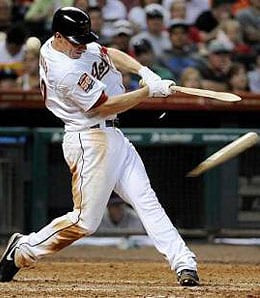 See? We told you Brian Bixler had a weak bat. (AP Photo/Pat Sullivan)

When we last checked in on Vernon Wells in late-September, we acknowledged that he had been better this year, but remained a serious bust because he simply had no way to live up to that silly contract Toronto gave him. Well, he didn’t play much after that and overall, he did manage to reduce his strikeout rate this season, so that’s something.

The problem is Wells is still owed $21 million for each of the next two seasons, which is going to make it hard for the Halos to rid themselves of that deal. But make no mistake, they need to try to do so for payroll flexibility purposes. In two seasons in Anaheim, Wells has compiled 36 homers, 95 RBI and a .221 BA. Ugh. It’s time for the Angels to channel their inner Mets and bite the bullet like New York did with Jason Bay.

Suddenly, the Angels need pitching and making some kind of deal to get out of the Wells contract would go a long way to helping them address their mound issues.

By RotoRob
This entry was posted on Wednesday, November 14th, 2012 at 10:35 am and is filed under BASEBALL, Fantasy Notes, RotoRob. You can follow any responses to this entry through the RSS 2.0 feed. Both comments and pings are currently closed.