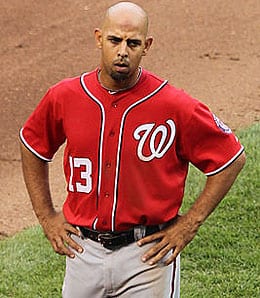 Alex Cora is doing just enough to stick as a big leaguer.

Alex Cora, who went seriously downhill after his injury-plagued 2009 (and no, it wasn’t a steep decline), actually looked somewhat useful back in May, batting .340 in limited action, but has fallen off the map since and has barely played since Ryan Zimmerman and Ian Desmond have returned to the Nats. The fact that he can play every infield position (he’s even seen seven games at first this year) means that the 35-year-old should stick around, even though he really can’t hit to save his life (although he’s at least getting on base more often than last year when he recorded a ridiculously low .266 OBP).

While we’re looking at veteran backup infielders on the Nats, the last time we checked in on Brian Bixler, he was getting his first shot in the majors back in 2008 with the Pirates. He really struggled with the stick in that first go-round and while he was marginally better in 2009, Bixler didn’t get another look in the majors until this year with Washington, where he’s mostly seen time at the corner outfield spots, but also a fair amount of action in the corner infield positions plus one game at shortstop, his original position coming up through the ranks. The 28-year-old hit well in June (.300) in limited opportunities, but overall Bixler’s almost complete lack of extra-base pop makes me wonder how he’s keeping a big league job.

Continuing our look at Fantasy-irrelevant Nats, long reliever Collin Balester looked somewhat decent in his last outing, tossing four innings on Sunday and giving up just four hits, two earned runs and two walks while fanning five. Unfortunately, he was farmed out to make room for Ross Detwiler, who was called up to make a spot start on Tuesday. Balestar had a pretty nice run in his time in the Nat bullpen last year, but he’s been too hittable to count on this season, so it wouldn’t be surprising if he didn’t come back until rosters expand in September.

Still in the bullpen, back in mid-April we thought that Sean Burnett would be a nice choice for saves, however he really struggled in April and has been only marginally better since, while Drew Storen has really thrived in the closer role. After such a stellar 2010 season, Burnett was expected to be a decent NL-only option this year, but inexplicably his strikeout rate has fallen off the map. After averaging a career high 8.86 K/9 last year, he’s sunk close to career-low levels with just 4.66 K/9 this year. I don’t get it, especially since his fastball has more velocity than ever (91.2 mph) this season. Perhaps Burnett isn’t getting the same kind of movement on his heater this year. At any rate, with his three wins and 10 holds, he retains a modicum of value in deeper NL-only leagues, but Burnett has been a major disappointment so far in 2011, especially considering we thought he had a chance to be quite useful.

The Nats have won two straight games to get back over .500, doing a great job of building on last season’s 10-game improvement that vaulted the team to 69 wins. But offensively, the team has regressed. The Nats rank 25th in OPS at 672 – the same ranking they had last year, but with a 36-point decline. Hitting coach Rick Eckstein is known as a very hard worker, but at some point he’s going to have to answer for Washington’s hitting woes.

New Manager Davey Johnson has his work cut out for him in trying to get the Nats into contention. It will be interesting to see how long he’s given to get the job done before Washington turns to third base coach Bo Porter, who is considered by most to be the logical next choice as the Nats’ manager.

By RotoRob
This entry was posted on Wednesday, July 6th, 2011 at 11:24 am and is filed under BASEBALL, MLB Today, RotoRob. You can follow any responses to this entry through the RSS 2.0 feed. You can leave a response, or trackback from your own site.