Podcast: Focus on the Postseason 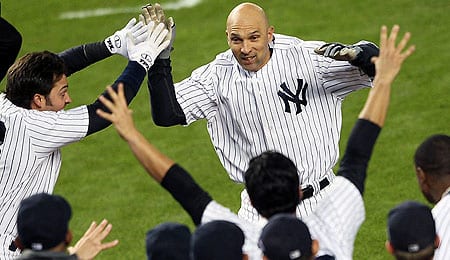 Raul Ibanez put the Yankees on his back in Game Three.

Well, it was another one of those episodes of RotoRob’s Fantasy Baseball Weekly Podcast (heard every Thursday at 9 p.m. EST on Blogtalkradio) this week. By that I mean that Blogtalkradio was back to its finicky self, and as a result the first 30 minutes or so of the show was lost into the ether. Thanks, dudes!

However, what we did salvage was gold, and included discussions on:

To the listen to the portion of the show that was not stolen by gremlins, click the play button below.

By RotoRob
This entry was posted on Friday, October 12th, 2012 at 12:55 pm and is filed under BASEBALL, Buck Davidson, Podcast, RotoRob, RotoRob's Fantasy Baseball Weekly, Tim McLeod. You can follow any responses to this entry through the RSS 2.0 feed. Both comments and pings are currently closed.