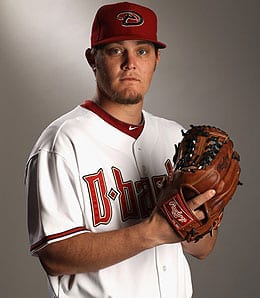 Back in late July as we bemoaned the awfulness that was the Philadelphia Phillies’ season to that point, we talked about how much Roy Halladay’s injury issues and overall ineffectiveness had contributed to the mess.

Well, Doc sure turned things around in August, going 4-1 with a 3.32 ERA and just 35 hits allowed in 40 2/3 IP, coinciding quite nicely with the Phils’ push back in the playoff picture.

This month, however, has been another story – one which took a serious ugly turn Saturday afternoon. Despite getting a win and no-decision in his two previous starts this month, Halladay had not pitched extremely well. But on Saturday? Ugh.

The Braves gave him a serious beatdown in what proved to be Halladay’s second shortest start ever (1 2/3 IP) in 376 career starts and his shortest ever that didn’t involve coming out early because of injury. It was an absolutely awful time for Doc to turn in a stinker as the loss dropped Philly four back in the Wild Card race with just 10 games remaining after – against all reason – the team had clawed its way back into postseason contention with four straight wins and a 12-3 run over the last 15 games.

Halladay’s outing – five hits, seven earned runs, three walks and a homer – was impossible to spin in a positive light.

Any way you slice and dice Halladay’s season, it comes up short. His strikeout rate has dipped to its lowest level since 2007 when he was still in the AL and didn’t have the advantage of pitching to opponent hurlers on a regular basis.

He has managed to rack up an eighth straight double-digit win season — pulling within two wins of 200 for his career in the process – but his worst ERA since 2000? That’s a category killer for Fantasy owners that invested heavily in Doc this spring.

The WHIP isn’t much better, checking in at its highest level since 2007.

Okay, let’s be fair. Halladay was dealing with shoulder spasms on Thursday, and real doctors had to check out the Doc before clearing him for Saturday’s start. Halladay refused to use that as an excuse, however.

Remember that he missed almost two months earlier this season with a strained lat, another major burn for owners from a dude that had been among the game’s most durable starting pitchers over the past half dozen seasons.

Once again, the Phils’ ace dealt with first-inning woes. He issued a walk to lead off the game, and after picking off Michael Bourn, he allowed a Martin Prado single and then a two-out single by Chipper Jones. Halladay got ahead of Freddie Freeman 0-2 before serving up a second-deck dinger. You could see how pissed Doc was over that one, as his first inning ERA rose to 5.63 through 24 starts this season.

The second inning was no less a debacle, and before that frame was over, Halladay was in the shower.

Now comes the question: will the Phillies decide to shut down their ace for the rest of the season after Saturday’s crushing defeat? Let’s face it – the dude is 35 now and the wear and tear is starting to show this year.

Halladay owners need to keep a close eye on the situation even though he himself says that he expects to make his final two starts of the season. Here’s hoping they both result in Ws, getting him to 200 for his career – a milestone that will help take some of the sting out of a miserable year.

By RotoRob
This entry was posted on Sunday, September 23rd, 2012 at 2:24 pm and is filed under BASEBALL, MLB Today, RotoRob. You can follow any responses to this entry through the RSS 2.0 feed. Both comments and pings are currently closed.