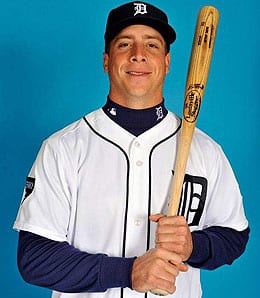 If you own Andy Dirks, you’re probably grinning like an idiot, too.

Tim is off at a wedding this week (no, not his own – he’s already married and he lives in Northern Ontario not Northern Utah), so the Troll once again falls into the shaky hands of your non-so-trusty Editor. On to our picks of the week…

Andy Dirks, OF, Detroit Tigers: Heading into the season, Dirks sat at the very bottom (145th) of our Fantasy outfielder rankings. Clearly, we’re not the only ones to be shocked to see him playing at a top 50 level, but that’s where he’s been, as this dude has found a home in the two-hole of the Tigers’ lineup. Dirks has been among the week’s most popular waiver wire picks, yet he’s still available in most leagues, so there’s time to jump on his train. He’s hit safely in seven straight games, including multi-hit efforts in the first five. Hell, Dirks has even started to draw walks, picking up his first four free passes of the season all in the last five games. He’s flashing extra-base pop, fine strike zone judgment and is hitting for an obscene .379 BA through his first 20 games. Note that Dirks is dealing with a hammy issue right now, but he’s playing through it. If you lost Jayson Werth to the DL last week, this is one of the best replacement options you’ll find.

Dale Thayer, RP, San Diego Padres: Huston Street has landed on the DL (no surprise) and Andrew Cashner has failed to fill the void (surprise), so suddenly it’s Thayer – who was last on our radar three years ago — who is earning saves in San Diego. This veteran has spent most of his time at Triple-A over the past half dozen years, but he does have a good track record as a minor league closer. After stranding a runner at third Saturday, the bushy-‘stached Thayer is now 3-for-3 in save chances and flying off the wire. Grab him immediately.

Hank Conger, C, Los Angeles Angels: Conger, who graduated from our Top 50 Prospects in 2011, began this season on fire, but wound up on the DL at Triple-A a couple of weeks ago with a sprained elbow. It sucks that he’s hurting now, because Conger surely would have gotten another shot for the Angels with Chris Iannetta out for the next couple of months. But before getting injured, Conger was flashing serious extra-base pop and tremendous on-base skills – two things the Halos could use right about now – so once he’s healed (likely before the end of the month), expect to see him get a long look in Anaheim. If you can stash him, it’ll pay dividends.

Vladimir Guerrero, DH, Toronto Blue Jays: As we discussed in last week’s Podcast, the Jays have signed Guerrero, and while many might think he’s got nothing left, we believe he’s worth a look. He’s down at Dunedin, working his way back into game shape, but once he arrives, Vladdy will be the Jays’ DH against lefties – which will mean less PT for struggling Adam Lind. Guerrero is getting a bit long in the tooth (37), but with a .561 career slugging percentage against southpaws, he can still do some serious damage.

Brian Dozier, SS, Minnesota Twins: Dozier, called up by the Twins to replace pathetic excuse for a starting shortstop Jamey Carroll, is another dude we talked about in the most recent episode of RotoRob’s Fantasy Baseball Weekly Podcast. We suggest you give Dozier a look in deeper AL-only leagues as he’s batting in the two-hole of Minnesota’s powerhouse lineup (okay, maybe not), and has hit safely in four of his six games so far, twice recording multiple base knocks. The prospect wasn’t exactly dominating in his first taste of Triple-A, so this is an aggressive move by the Twins, underscoring once again how foolish it was to give Carroll a multi-year deal. Don’t expect a ton of offense from this kid, but hey, the dude’s starting at a shallow position, so there is some value here.

Andy Pettitte, SP, New York Yankees: Another topic of discussion in the Podcast, Pettitte will make his season debut Sunday, and could be a sneaky play because he’s taking on the Mariners and their miserable excuse for an offense. Still, it’s hard to expect much from this aging veteran who hasn’t made a start in the bigs since mid-October 2010. But hey, at least he raises the Yankees’ average age by about five years. So much for New York’s youth movement. However, Pettitte does know how to pound the strike zone, and with the Yankee attack behind him, he should be able to scratch out some Ws, so give him a look in AL-only leagues.

Casey Janssen, RP, Toronto Blue Jays: Last week’s Podcast was clearly a sneak peak of this weeks’ Wire Troll as Janssen — recently named as the new Toronto closer — was also on the docket. The third Jay reliever to try to nail down games (Sergio Santos got hurt and Francisco Cordero simply sucked), Janssen is the latest hot commodity in what is turning out to be a season of turmoil among the closer ranks. On Saturday, Janssen tossed his second straight perfect outing for his second save since ascending to the role. Until Santos returns from the DL, Janssen is a must-own player.

Joaquin Benoit, RP, Detroit Tigers: Heading into the season, we talked about how Jose Valverde was the shakiest of the top tier closers, and how Benoit could benefit if Valverde implodes. Well, Valverde still has the gig in Motown, but he’s already blown two saves after going perfect last year, and his command has been atrocious. Benoit, meanwhile, hasn’t been much better, looking much more hittable this year and also dealing with wildness. Still, the Tigers’ eighth-inning man is rounding into form, tossing four straight shutout outings, giving up just one hit and one walk while striking out five over 3 1/3 IP during this stretch. Benoit struggled for two months last year before turning it on; it looks like he’s overcome his slow start earlier this year. This dude is widely available, and AL-only league owners should give him a long look – Benoit could be money from here on out and will provide a nice boost in Ks (22 in just 13 2/3 IP), holds, ERA and WHIP (which will get much better than its current ugly state very quickly).

By RotoRob
This entry was posted on Sunday, May 13th, 2012 at 10:19 am and is filed under BASEBALL, RotoRob, The Wire Troll. You can follow any responses to this entry through the RSS 2.0 feed. Responses are currently closed, but you can trackback from your own site.