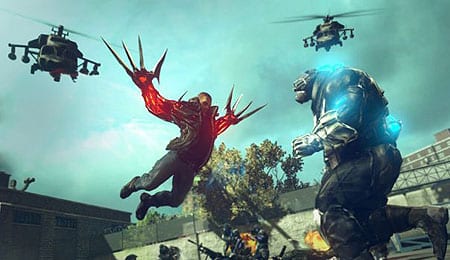 “Fun but flawed” would be an apt CliffsNotes review of the original Prototype, which allowed you to run amok as the powerfully mutated Alex Mercer in an open-world sandbox. Some three years later, developer Radical Entertainment has teamed up with Activision once again to release Prototype 2, a title that looks to build on the promise found in the first game.

Prototype 2 is a rare game in that it actually gets more difficult to control as your abilities evolve and become more powerful. Early on it’s easy to keep track of everything, but eventually you’ll have access to five separate powers (you can only have two “active” at once) and your movement speed and jumping will be so extreme it becomes unwieldy. The setup reminded of a line from the movie The Siege, where Bruce Willis says the Army is a “broad sword, not a scalpel.”

That is exactly what the controls here are like. Even when you want to be precise you move and attack at such a frenetic pace that it’s not even really an option. As noted, it’s not a big deal early on. However, as you and your enemies grow faster, the combat — and to a lesser extent navigating the city — can become a dizzying affair to keep track of.

Also serving to undercut your precision is a targeting system that often locks on enemies or objects that are well out of range from what you are currently fighting. You are able to cycle through targets, but in truth that’s only viable when facing off against small numbers of enemies. Otherwise you’re open to take a pounding. Thankfully, you are equipped to do just that so all of the control issues can be shrugged off as simple inconveniences.

There is little doubt Prototype 2 earns its “M” rating on all fronts. Visually, the game is saturated in blood with violent dismemberments aplenty as your character must consume his victims, which more often than not means pounding them into a pulp. It creates a visceral satisfaction, though by the time the credits roll you will have seen all the game has to offer repeatedly. It’s a shame that, as you level up your abilities and activate more mutations, new kill animations aren’t added.

Although the entirety of the game takes place in NYZ, a post-outbreak version of New York City, you do get some environmental variety in the form of different zones. While you’re still clambering up buildings and soaring through cityscapes, at least the infected activity level is decidedly different. The city looks pretty good, but you can see the limitations when you scale a tall building and look around as all sense of detail vanishes.

Voice acting is respectable with the principle emotion being rage. James Heller pulls out almost all the profanity stops in his role as a father turned vigilante, cursing a blue streak from start to finish. His victims don’t shy away from colourful language, either, and your foes are depicted as such remorseless caricatures, with nary a shred of human decency, that it gets to be a little much after awhile. Sound effects are forceful and the in-game music is respectable.

A little over a year has passed since the initial outbreak, and New York City is once again quarantined after a second appearance of the Mercer Virus. You play as James Heller, who has returned from a tour of duty in Iraq to find his wife and daughter declared dead. Despondent, Heller blames Mercer, and pursues him in an early scene. The fight ends with Mercer easily dispatching you. However, instead of killing you he injects you with the virus to grant you the same supernatural powers.

From there, the story essentially revolves around which faction — Mercer’s evolved or the Blackwatch mercenaries — represents the lesser evil. To advance the main arc, Prototype 2 utilizes the same setup as Rockstar’s open world games in which missions are triggered by going to marked points on the map. Similar to those games, the time in between story sections can be filled up by exploring the massive sandbox of an infected New York.

Whether you’re pursuing the story missions or Blackwatch side quests, the game plays out predictably with a limited variety of objectives. In fact, the majority of them revolve around you consuming enemies to infiltrate a secure facility and then laying waste to it. Yeah, they’re fun… I just wish the developers could have found more ways to mix things up. Outside of the odd crate collection, where you race the clock, it’s almost all hunt and consume.

In addition to a dozen multi-part side quests, there are also black boxes to find, lairs to destroy and field teams to eliminate. They’re all completely optional, but since completing those nets you upgrades, odds are you’ll be tackling them as soon as they become available.

Upgrades in Prototype 2 are actually split into three distinct paths. Overall upgrades — such as health, jumping/speed and regeneration – are achieved by leveling up Heller via the experience points earned from completing missions and consuming specific foes. Mutation power boosts for augmenting abilities follow the Fallout 3 “perk” system (right down to the animations) and are unlocked by finishing the aforementioned side quests. Lastly, enemies will randomly appear with a flexed arm over their heads; consume them and you’ll raise your proficiency within a specific power.

Combat pulls no punches in Prototype 2, empowering Heller early and steadily ratcheting up his powers throughout the game. However, combat is highly imprecise as you’ll often find yourself flying around areas trying to frantically maintain your bearings. It also doesn’t help the growing sense of sameness that the game shows you pretty much all it has to offer before you leave the original zone. New enemies do continue to debut, but your tactics are unlikely to change much.

All told, you can expect to spend north of a dozen hours going through the campaign, assuming you spend time exploring and completing the side quests. Once you’re finished, a new difficulty setting opens up, and you can continue with a game-plus mode, giving the more dedicated players a good reason to make a second run.

Much improved over the original, Prototype 2 is pretty much an ass-kicking simulator; it puts massive amounts of destructive power at your fingertips and droves of hapless foes in your path to dispatch. There are some issues to overcome, but they don’t do enough to significantly damage my endorsement.

By Herija Green
This entry was posted on Saturday, May 12th, 2012 at 2:27 pm and is filed under Herija Green, Video Game Reviews. You can follow any responses to this entry through the RSS 2.0 feed. Both comments and pings are currently closed.