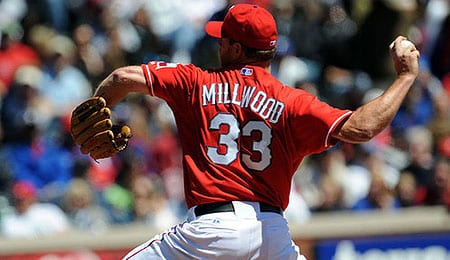 Boston’s awful start this year has plenty of culprits behind it, including a sluggish start by first baseman Adrian Gonzalez – especially in the power department.

Well, after dropping the opener against Cleveland on Thursday, the BoSox won each of the final three games.

A-Gon figured prominently in the series, recording multiple hits in three of the four games and flashing some extra-base pop, with five doubles among his six hits.

After career highs in runs and hits last year, Gonzalez still has a long way to go to get back on track, but this weekend’s performance was a step in the right direction for both him and the team.

The big question is where has Gonzalez’s home run stroke gone? Last year, the shoulder he had repaired in 2010 continued to bother him, but he says that’s fully behind him now. In other words, there’s no reasonable reason why Gonzalez isn’t going yard lately. Let’s hope the doubles barrage is a precursor to some long ball exploits.

By RotoRob
This entry was posted on Monday, May 14th, 2012 at 6:05 pm and is filed under BASEBALL, MLB Today, RotoRob. You can follow any responses to this entry through the RSS 2.0 feed. Responses are currently closed, but you can trackback from your own site.