The Wire Troll: Everyone Needs a Putz 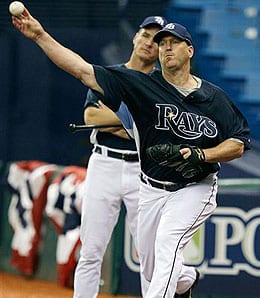 Is this the end of the line for Troy Percival?

Another week rolls by and another group of closers is unveiled to the masses. I’ve been playing this game for 20 years and have never seen a year so fraught with bullpen challenges. Troy Percival hit the DL and is possibly looking to call it a day; Francisco Rodriguez is dealing with back spasms; the A’s pen is seemingly in disarray; both Brad Lidge and Matt Lindstrom are getting lit up like Christmas trees, and this was all just Saturday’s news. It is very easy to understand why Fantasy team owners are pulling their hair out in clumps these days.

We also saw the first starts this week of both J.A. Happ and Derek Holland, who both performed very credibly and now we are anxiously waiting for David Price to be summoned to the Rays’ rotation. Price is certainly a hot commodity these days, but not a readily available one, as he is currently owned in 87 per cent of teams playing over at CBS.

Moving forward, let’s take a look at some of the waiver wire options heading into the last week of May.

J.J. Putz, New York Mets, RP: K-Rod’s lower back spasms have thrust Putz into the closer role for the Mets. I wouldn’t be at all surprised to see Rodriguez hit the DL, making this a bit longer opportunity for Putz than just the day-to-day variety. For those Fantasy teams that are needing a boost in the save category, Putz should be rostered and active in all formats.

Anthony Swarzak, Minnesota Twins, SP: The 23-year-old Swarzak was recalled from Triple-A Rochester to replace Glen Perkins, who is currently on the DL with elbow inflammation. In his first start Saturday, Swarzak pitched seven scoreless innings against the Brewers, allowing five hits and two walks while chalking up three strikeouts in a very tidy effort. He has a tough foe in the Red Sox next time out, but one can’t argue with the early results. In 44 IP down on the farm, Swarzak managed a 2.25 ERA and solid 32 strikeouts with only 11 walks. He is a solid add in AL-only and keeper formats and should be watched very closely in his next several starts for possible pick up in mixed leagues.

Josh Outman, Oakland Athletics, SP: The 24-year-old southpaw has been very quietly pitching extremely well since being inserted into the A’s rotation on May 3. The former Philly farmhand, acquired in the Joe Blanton trade, has allowed only six earned runs while striking out 20 in his past four starts. Outman is a solid AL-only acquisition at this time and should be on the radar in all formats.

Tampa Bay’s Bullpen: Percival has hit the DL with shoulder tendinitis and it looks like quite possible his long career might be at an end. Currently, the Rays have no shortage of candidates to step up with Dan Wheeler, Jason Isringhausen, Grant Balfour, Joe Nelson and even recent call-up Dale Thayer all potentially in the mix. This takes the bullpen-by-committee strategy to a whole new level. Wheeler and Isringhausen both have history on their side and are probably the favourites. If your Fantasy squad is in need of saves and has the bench space available, Wheeler or Isringhausen are your best shots.

Michael Cuddyer, Minnesota Twins, OF: Cuddyer has been one of the hottest pickups in daily transaction leagues this past week and for good reason. Over the past 10 games he is batting .341 with four homers, 12 RBI, and 11 runs scored. Cuddyer is currently owned by just 60 per cent of teams playing over at CBS, which is rather surprising. My take, after his play in the past week, is that he will be owned by the other 40 per cent by the time next week rolls around, or at least he should be. Now that he’s healthy, it’s very possible Cuddyer could return to his 2006 levels of production.

Kelly Johnson, Atlanta Braves, 2B: Johnson is slowly starting to look like the player that has been a steady performer for the Braves over the past couple of seasons. He has hit 28 homers over the past two seasons and there is every reason to assume his current funk will end soon. With their anemic offense, the Braves certainly need Johnson’s bat. If he’s out there in your league, it’s worth gambling that a return to form is not that far off.

Aaron Rowand, San Francisco Giants, OF: Rowand was moved into the lead-off role for the Giants this past week and has responded in fine form. In his past 10 games he’s batting to the tune of a .361 BA with three homers, five RBI, and six runs scored. Rowand is also quite available, being owned by only 22 per cent of the teams playing in CBS leagues, and is a solid option in all formats.

Kenshin Kawakami, Atlanta Braves, SP: The former Chunichi Dragon has been very steady for the Braves thus far in the 2009 season. In six of his eight starts, he has allowed three or less earned runs. Friday night, Kawakami had his full repertoire of pitches working against one of the best in the biz, Roy “Doc” Halladay. He pitched eight scoreless innings for the win, allowing only three hits and no walks while fanning seven. Kawakami is a great option as a back-of-the-rotation starter in all formats.

Alcides Escobar, SS/Hernan Iribarren, 2B, Milwaukee Brewers: The Brewer middle infield is currently in a bit of disarray. Rickie Weeks is lost for the year with a torn tendon in his wrist and J.J. Hardy is currently day-to-day with back spasms. Craig Counsell is currently filling the void, but for how long? At Triple-A Nashville, the Brewers have both Escobar and Iribarren waiting in the wings. For both these kids, the name of the game is speed and contact. If the Brewers look to fill the void from within their organization, expect one or both to receive call-ups in the near future. For those in NL-only and deep keeper formats, now is the time to get the jump on the competition.

By Tim McLeod
This entry was posted on Sunday, May 24th, 2009 at 12:37 pm and is filed under BASEBALL, The Wire Troll, Tim McLeod. You can follow any responses to this entry through the RSS 2.0 feed. You can skip to the end and leave a response. Pinging is currently not allowed.