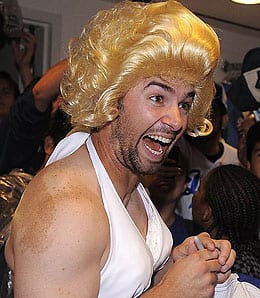 We’re now a couple of weeks into the season, and one thing has become painfully clear. The Chicago Cubs’ offense, which was middling last season, has sunk to among the worse in the majors this year.

With a team OPS that’s currently sitting at 643, the Cubs are only better than the following NL teams: San Diego, Philadelphia, Cincinnati and Pittsburgh. You know the Reds will fly by them in short order and the Phils should as well, especially once Ryan Howard and Chase Utley return. Hell, even the Pirates could wind up better, given their upside. Yes, the Cubs are reaching for new lows offensively, and it’s manifested itself in the standings where they are currently tied with Pittsburgh for last place in the NL Central.

Toss in a team ERA that also ranks near the bottom of the majors, and we could be looking at a very long season in Chi-Town.

Where do we even start with this team?

Blake DeWitt should never be allowed to use a bat for anything but smacking a piñata, and even then, he’s not to be trusted to actually get any candy out of it.

Marlon Byrd’s regression has continued, and he’s off to a horrifically slow start. Any chance the Cubs have of peddling his contract will be gone if he doesn’t wake up.

Joe Mather, brought in to beef up the bench, is hoping to raise his average to the point where it is 50 per cent of his weight. And no, he doesn’t weigh 400 pounds.

Jeff Baker is another veteran that’s taking up space on the bench.

Geovany Soto’s trend of one good year, one bad year looks like it’s ending. That’s the good news; the bad news is he was scheduled for a good season in 2012.

Alfonso Soriano is actually hitting for average (like that’s going to continue), but he doesn’t have a single extra-base hit in nine games.

While he hasn’t been awful, Reed Johnson hasn’t really been able to take advantage of Byrd’s struggles and certainly isn’t seeing enough PT to matter in anything but super deep NL-only leagues.

By RotoRob
This entry was posted on Tuesday, April 17th, 2012 at 5:10 pm and is filed under BASEBALL, MLB Today, RotoRob. You can follow any responses to this entry through the RSS 2.0 feed. Responses are currently closed, but you can trackback from your own site.