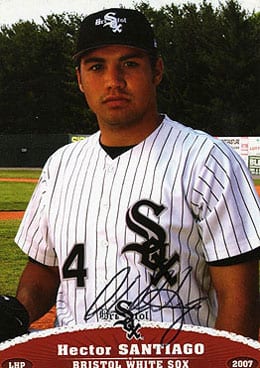 One of the great mysteries this spring was who was going to emerge as the new closer for the Chicago White Sox after the team peddled Sergio Santos to Toronto in the winter. Well, the season’s underway, but we still have no idea.

Matt Thornton, who got the first crack last year but failed, was apparently the frontrunner to get another shot.

Meanwhile, many people expected Addison Reed to ultimately emerge with this job, if not immediately, then certainly for the long haul.

Jesse Crain had definitely snuck into the mix as a long shot candidate, and someone we always believed had the stuff to close, but never the opportunity.

Brian Bruney is another pitcher that’s long been considered to have closer stuff, but has been hampered by wildness and injuries.

But nowhere in this discussion had the name Hector Santiago been broached as a possible closer candidate for the south siders. The rookie southpaw seems to have emerged as the lead candidate after both Thornton and Reed were employed in non-save situations on Friday while Santiago was warming up to pitch the ninth if the Sox had tied the game or taken the lead.

Manager Robin Ventura is being maddeningly coy about this, refusing to anoint anyone as his closer, and leaving Fantasy owners scratching their heads about who to invest in. He says he’s going to let match-ups dictate his choice, and that’s something Fantasy owners never want to hear.

Well, if you’re going to take a flier, we suggest plucking Santiago, who is widely available, but sure won’t be for long once that first save opportunity is served up to him.

To say Santiago has come out of nowhere is an understatement. First of all, he was only used as a starter last year, although he spent his first four minor league seasons relieving. Second of all, he’s only made 15 starts above A-ball, and has never pitched out of relief at a level higher than High-A (other than two relief appearances in his big league debut last year). While everyone assumes Reed has been groomed to close, Santiago has never had a defined role. He only notched four saves in four years prior to 2011 and, as mentioned, last year Chicago converted him into a starter. And now he might closing in the Show. Uh… okay.

Santiago flashed dominant strikeout rates in his first three seasons, and really improved his control after 2009, although he struggled with wildness again after his promotion to Double-A last year.

By RotoRob
This entry was posted on Saturday, April 7th, 2012 at 1:24 pm and is filed under BASEBALL, MLB Today, RotoRob. You can follow any responses to this entry through the RSS 2.0 feed. Both comments and pings are currently closed.