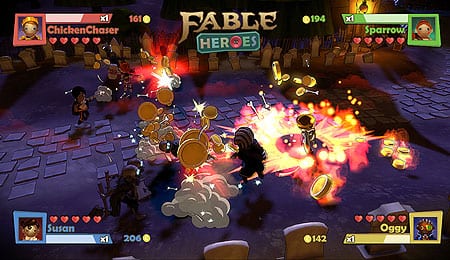 Trust us, the screen gets a lot more confusing than this.

Coming off the release of the ultraviolent Bloodforge, Xbox Live’s Arcade NEXT promotion gets a much more family-friendly offering this week with Lionhead Studios’ Fable Heroes. There’s still a hack ‘n’ slash motif, but demons being hewn in two has been replaced by Hobbes in Santa hats bursting into coins. It’s typical Fable silliness dressed up in a new package; but is the series’ transition from action RPG to side-scrolling beat ’em up a successful one?

While the main Fable games split melee, ranged and magic attacks across three face buttons, Heroes streamlines this even further with light and flourish (read: heavy) attacks only. A dodge function allows you to evade your foes and pulling the right trigger unleashes an area attack that damages all enemies around you at the expense of your own health.

This setup is undeniably easy, though the inability to dictate your attack type is disappointing. It’s a non-issue for characters that have only ranged or melee strikes, but for someone like Jack of Blades, who uses both, it’s left entirely to the computer’s discretion. That lack of control also removes any semblance of strategy and leaves Fable Heroes as little more than a button masher.

Those that remember hero dolls from the first two Fable games will recognize them as the genesis for this game’s look. The puppets flop about as they traverse the map before assuming more “lifelike” movements during gameplay. In action the puppets move smoothly, swinging their swords and casting spells against waves of enemies. To the game’s credit, the frame rate almost never stutters no matter how many coins, monsters and visual effects fill the screen.

Of course, that also speaks to Fable Heroes’ most notable visual black eye: it’s too busy. The game delights in unleashing dozens of foes at once, and after you’ve killed the first wave, the screen is often littered with coins as a second group materializes. Add each character’s signature attack effect (such as little skulls appearing as they swing their weapon) and it’s very easy to lose track of your character and fall into a pattern of “I know I’m in there somewhere so I better hit ‘X’ and attack!”

The game’s soundtrack can be described in two words: relentlessly upbeat. No matter what’s going on the music happily marches along, providing a constant reminder that this is supposed to fun and whimsical. It’s a little much after awhile — I played with the volume low most of the time — but I suspect kids will enjoy it.

Fable Heroes brings together several of the series’ well-known characters in puppet form for an old-fashioned beat ’em up. Initially you’ll have access to four heroes with the ability to unlock another six (with two more apparently arriving when Fable: The Journey releases). It’s a decent selection, even if they overlap in terms of how they function in battle.

Seven levels comprise the world of Albion, each of which contains a branching path. One road leads to a boss fight while the other takes you to a mini game. Once completed you can choose to replay any level or go directly to the boss battle or mini game. After you’ve finished all seven, Dark Albion becomes available. Here things are visually remixed with harder enemies, though you’re unlikely to be tested much even on the highest difficulty setting.

Combat is of the button mash variety. As noted, the graphical insanity often makes it hard to do much more than press “X” and hope for the best. Play long enough and you’ll become accustomed to the chaos and do some different things, but it never opens up with any real variety. Even the power-up chests that provide temporary attributes like speed or increased size become little more than nuisances once your character gets strong enough.

Where Fable Heroes succeeds is by making each level simultaneously co-operative and competitive. You and your teammates (human or A.I. — you’re always in a team of four) are working together to dispatch foes while still trying to collect as many coins as possible. Do too much killing and others will reap the rewards. Don’t do enough and your multiplier will suffer, meaning you won’t earn as much currency.

Once you cross the finish line all the coins will be tallied and an Olympic-style podium will appear with the top three finishers being honoured. The last-place hero sits alone and is highlighted with a “wa, wa, waaaaaa” to cement their status as the loser. Each level contains a meter with multiple thresholds that are filled by the coins, and at each threshold you earn a die. The more coins you pocket the more dice you’ll be able to roll on the abilities board.

The abilities board doubles as Fable Heroes’ upgrade system, only instead of being able to upgrade what and when you want you’ll need to land on the square containing the upgrade, which you then pay for with gold. The outer board contains 20 squares with almost 40 abilities ranging from additional damage and better weapons to changing facial expressions and kicking Hobblettes. If nothing else, it forces you to play longer to net all the upgrades.

After you purchase all the abilities, your puppet will move to the inner board, which contains tiles that appear as you earn the game’s achievements. There are 12 in all, and these provide single-use boosts for your next level — such as doing more damage or having coins gravitate toward you. The hope is that after playing through all 14 levels (there are actually 16 levels, but “The Cloud” is a community unlock that is unavailable at this time) you’ll want to go back and destroy your previous high score.

Without that desire, however, Fable Heroes is an incredibly short game that can be completed in less than 90 minutes. There’s also the matter of repetition. We’ve already mentioned that the combat is barebones, but on top of that the mini games are primarily button-mash races with a survival arena and some chicken shenanigans tossed in. To enjoy the game you’ve got to embrace that approach.

Online play is also a mixed bag. In terms of performance it holds up well, but unless you’re the host you’re powerless. They select where you go, if you can change puppets, when to leave the post-level wrap screen and more. I finished the final level with someone that must have wandered off, leaving me to watch the credits on loop until I dashboard quit. Not cool. Also, I lost all sense of impact online. This is PG stuff at the darkest of moments, but it just seemed like I was swinging my sword through air and then enemies would eventually burst into coins.

For better or worse, there’s not a whole lot of steak relative to Fable Heroes’ sizzle. The combat is mindless, the challenge is minimal and the replay value is grounded in a willingness to do the same things repeatedly to better your score. If you enjoy that formula it’s a worthy purchase. If not, don’t bother.

By Herija Green
This entry was posted on Monday, April 30th, 2012 at 6:34 pm and is filed under Herija Green, Video Game Reviews. You can follow any responses to this entry through the RSS 2.0 feed. Both comments and pings are currently closed.