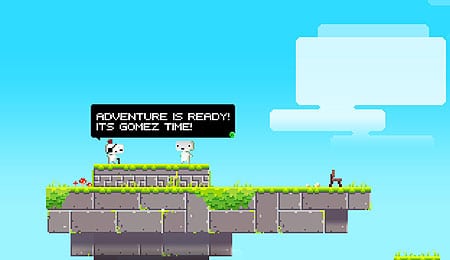 People with eye patches always have the coolest adventures.

Ripped from another era of gaming, developer Polytron brings you Fez, a game available for your purchasing pleasure on Xbox Live Arcade. Now go buy this game. Yes, I’m serious; you’ve spent enough time not playing this game, go buy it right now. If you really want to wait, go ahead and keep reading, but just remember one thing — Fez is waiting for you.

At its heart, Fez is a puzzle platformer, so things like slick controls and tight responsiveness are must haves. Jumping and movement are pretty standard, oriented to the left analog stick and “A” button. The other face buttons control world interactions, such as picking up and throwing objects or talking to NPCs, and accessing your inventory. Pressing back brings up the world map, which helps keep you from getting lost in Fez’s large and interconnected world.

The real crazy stuff happens when you use the bumpers or triggers to spin the world 90 degrees in the direction of your button press. Even in the midst of tricky gameplay, Fez seamlessly delivers its controls in a way that feels familiar even if you’ve never played it before.

Visually, this game is an 8-bit masterpiece. Upon exiting Gomez’s house at the start, you’re instantly greeted by a scenic 360-degree pan of the town, showing off every intricate detail. The game is just as fun to watch as it is to play, and it never hurts to stop for a moment and soak in the beautiful design of each area. The 3D panning effect works in conjunction with the visuals to make exploration immersive as you not only want to explore to progress to the next challenge, you want to see everything this beautiful world has to offer. From a cloud floating lazily in the sky to a crashing waterfall, Fez delivers images that will keep you coming back.

Expect that same level of excellence from the soundtrack, which delivers some of the most complimentary backings to a game’s visuals I’ve ever experienced. At times the music is haunting, mixing a beauty and darkness seldom heard in games, and at others its uplifting tone and curious nature inspire the adventure even more. It pushes you gently along, urging you to explore with its expansive tones and mystifying overtures.

When you start your journey through Fez’s world you may find it easy to start picking favourites. You’ll soon discover, however, that picking a favourite is a fruitless endeavour — every song delivered from the title screen to the credits is just amazing. Offering charm, spirit and an undeniable sense of adventure, Fez’s soundtrack is one of Xbox Live Arcade’s best.

Gomez’s world isn’t like yours or mine. His world is one dimensional, much like in classic games such as Metroid or Castlevania. Gomez’s journey begins like any other platformer, but shortly into the game he is given a fez; and everything changes. This fez has the ability to spin his world horizontally in each direction. His world, however, still exists within the pre-given confines of its one dimensionality — this means that distance is irrelevant and if it’s touching it exists in the same plane and therefore can be traversed. Opening your mind to this way of thinking takes a little while to get used to, but soon you’ll realize how much of a step forward in puzzle games it is. The linearity of Gomez’s world no longer takes the form of a crutch to gameplay, instead literally shaping itself into a powerful tool at your disposal.

Fez’S vast world is begging to be explored. Through every doorway and passage unique environments await your platforming prowess, each with different challenges and obstacles to overcome. Each challenge you face requires a different approach, and paying attention to the environment is key to solving many of the game’s more challenging puzzles and riddles.

It’s actually quite easy to become lost in all the madness, making the in-game map a necessity. With tons of collectables to acquire, puzzle platformer isn’t a suitable description for this title; rather it takes the shape of said genre, offering mind- bending puzzles with lengthy, platform-based exploration. Dying in Fez is something that may happen quite frequently. Upon dying you’re immediately returned to the last place your feet were firmly planted on the ground. In most cases, dying offers information on how not to tackle an obstacle, which is more useful than you might think. The amount of time you’ll spend with Fez depends heavily upon your willingness to explore its world and learn its secrets — and however much time that turns out to be is time well spent.

Sadly, Fez is not a flawless diamond as one small issue stopped me from giving it the perfect status it nearly attained — the auto-save feature. Now don’t get me wrong, it works great and keeps you from worrying about lost progress by saving every time you enter a doorway or get a collectable. During the saving process however, the game sometimes experiences a brief patch of lag, which is enough to wreck any jump you are currently doing when it occurs. After you know it happens it’s an easy fix to just wait for the auto save before progressing, but every now and then the thrill of exploration will get to you, and a quick drop will be your demise.

This game is overwhelmingly amazing. It gives off a shine of light that reaches into the farthest depths of your being to remind you of what a game should aspire to be. Fez is a gaming experience that should absolutely not be missed.