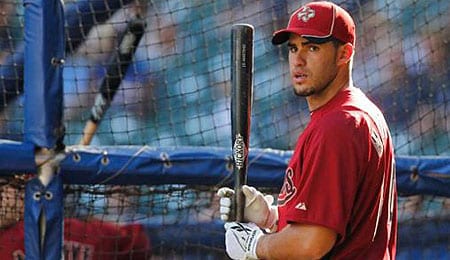 J.D. Martinez has a chance to be a very productive player this season.

We’re back with another batch of the 2012 RotoRob MLB Draft Kit. So while you Chris Carpenter owners can feel a tiny bit better about your hurler’s prospects, let’s take a look at a few players we consider sleepers heading into the 2012 season.

One of the rites of spring is scouring the player depth charts in search of that next diamond in the rough. When you’re looking for sleepers, two factors should enter into the equation – playing time opportunities and potential upside. On draft day, in the latter rounds all bets should be off. It’s time to throw caution to the wind and gamble on those players that have the potential to return hefty dividends. Realistically, the worst that can occur is you’ve now made a date with the waiver wire. With that in mind, let’s give some of our top 2012 sleepers the proverbial once over.

J.D. Martinez, OF, Houston Astros: The word coming out of Houston is that Martinez will be occupying either the third of fourth slot in the Astros’ batting order this year. Yes, we know it’s Houston — no one’s idea of a prolific offense — but someone has to drive in runs, so as a fourth or fifth outfielder in five-outfielder sets, Martinez will have value. In three seasons in the minors prior to his promotion to the big league club last August, his lowest OPS was 937 in 2010. Last August we saw a glimpse of Martinez’s potential when he smacked five homers with 28 RBI. Is a 20-90 campaign in the cards for the young outfielder?

Denard Span, OF, Minnesota Twins: In his first two full-time seasons patrolling centre field for the Twins, Span scored 97 and 85 runs respectively. Toss in the 23 and 26 stolen bases and he was well on his way to being a solid Fantasy producer. Then came the trainwreck called 2011 and a concussion that pretty much made it a lost season for Span. Early on this spring, he ran into a chain link fence and survived, always a good sign for a player coming off concussion issues. If he’s healthy and back hitting in the leadoff slot – which it appears he will be – Span is a solid outield option ripe for the picking.

Alcides Escobar, SS, Kansas City Royals: There is definitely a dearth of talent at shortstop heading into 2012, but that doesn’t mean all is lost. In the latter rounds Escobar’s great speed potential is more than worth of gambling on. In 2009, he managed 42 thefts with a great .298 BA at Triple-A Nashville and last year he swiped 26 bags in his first season in KC. If the top-tier middle infielder options escape your grasp on draft day, Escobar and his 35-steal potential should be on your radar.

Tommy Milone, SP, Oakland Athletics: Our on-going man crush with Milone resumes. Heading into 2012, the A’s rotation is anchored by Brandon McCarthy with Bartolo Colon penciled in as the No. 2 starter, however, it’s a wide open competition to fill out the rest of the rotation. In 306 1/3 IP over the past two seasons in the minors, Milone managed to strike out 310 batters while allowing only 39 walks. No, that’s not a misprint. Not all that bad for a soft-tossing lefty, huh? In a brief audition in Washington last fall, he held his own and now that he’s in Oakland, the window of opportunity is wide open, so don’t be surprised to see Milone break camp owning one of those rotation spots.

Henderson Alvarez, SP, Toronto Blue Jays: The soon-to-be-22-year-old righty made a successful transition from Double-A to the Jays’ rotation in mid-August. In 10 starts, Alvarez posted a 3.53 ERA, 1.13 WHIP and solid 40/9 K/BB ratio. The Jays have him penciled in for a rotation slot and the upside his more than warranting of a late draft pick or bench slot.

Jonathan Sanchez, SP, Kansas City Royals: The ankle injury that cost Sanchez most of the second half of the 2011 campaign appears to be in his rear view mirror. Any semblance of a return to his 2010 level of play is instrumental in the Royals’ plans to take that next step in the AL Central. The free passes are always a concern with Sanchez, but his 200+ strikeout potential can’t be ignored when looking at the latter rounds in 2012 drafts.

John Mayberry, Jr., OF, Philadelphia Phillies: Raul Ibanez has moved on to the Yankees and Domonic Brown is still deemed not ready. Will Brown ever be ready? The job is Mayberry’s to lose and the Phillie hierarchy will be giving him a long leash in 2012. If he can build on his 15-homer, 49-RBI, eight-theft 2011 campaign, you could find some serious value this season with this pick.

Adam LaRoche, 1B, Washington Nationals: Prior to 2011, LaRoche was one of the most consistent middle-tier producers at first base. From 2005 through 2010, he averaged 25 homers and 87 RBI including three consecutive 25-dinger season prior to being derailed by shoulder woes last year. The Nationals are committed to LaRoche and if his shoulder is fully healed a bounce-back campaign could be right around the corner. In NL-only formats special attention should be given to him as first base is quite shallow following the offseason defections of Prince Fielder and Albert Pujols to the Junior Circuit.

Bryan LaHair, 1B, Chicago Cubs: In 456 at-bats at Triple-A Iowa, LaHair pounded the ball to the tune of 38 homers and 109 RBI. Toss in another 15 big flies in Winter League Ball and that’s a mighty impressive total. Top prospect Anthony Rizzo is going to start and quite possibly finish the 2012 season in the minors. New Cub Manager Dale Sveum is prepared to give LaHair a long leash and given that he’s slated to hit cleanup, LaHair could be just what the doctor ordered if your team needs a power boost.

Rex Brothers, RP, Colorado Rockies: What would one of our sleeper lists be without at least one off-the-radar type middle reliever with closer potential? In 68 2/3 IP between the minors and bigs last season, Brothers struck out an incredible 104 batters. The Rockies’ closer-of-the-future is one stumble by incumbent Rafael Betancourt from being the go-to guy at Coors Field.

Wei-Yin Chen, SP, Baltimore Orioles: The O’s are getting their first look at the skill set that made him an ace in Japan, and are enjoying what they’re seeing in the early results.

Munenori Kawasaki, SS, Seattle Mariners: Being good friends with Ichiro Suzuki does have its perks. Can the vaunted skill set of Brendan Ryan hold off the speedster from Japan?

Tyler Greene, 2B, St. Louis Cardinals: Greene had 14 homers and 19 thefts at Triple-A Memphis last year and is the early favourite to break camp with the job at second base.

Tyler Pastornicky, SS, Atlanta Braves: Whether Pastornicky’s ready or not, the Braves appear to be committed to giving him the job at shortstop out of the gate in 2012. The 27 thefts he racked up between two levels in the minors in 2011 are intriguing.

By Tim McLeod
This entry was posted on Thursday, March 15th, 2012 at 11:07 am and is filed under 2012 RotoRob MLB Draft Kit, BASEBALL, Sleepers, Tim McLeod. You can follow any responses to this entry through the RSS 2.0 feed. Both comments and pings are currently closed.