Podcast: A Closer Look at the First Base Rankings 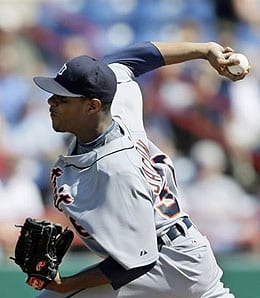 Edwin Jackson is another pitcher that slipped through Boston’s hands.

Last night was Thursday which meant it must have been time for another episode of RotoRob’s Fantasy Baseball 365 Podcast featuring Buck, Tim and myself spending a half-hour rapping all things roto related.

In this week’s episode, we covered all the bases, including:

We spent the bulk of the show dissected our recently released First Base Rankings, examining the top eight in close detail, plus offering each of our takes on an under the radar player and one to avoid at first base.

Listen to the show in its entirety by clicking the play button below.

By RotoRob
This entry was posted on Friday, February 3rd, 2012 at 11:14 am and is filed under BASEBALL, Buck Davidson, Podcast, RotoRob, RotoRob's Fantasy Baseball 365, Tim McLeod. You can follow any responses to this entry through the RSS 2.0 feed. You can skip to the end and leave a response. Pinging is currently not allowed.