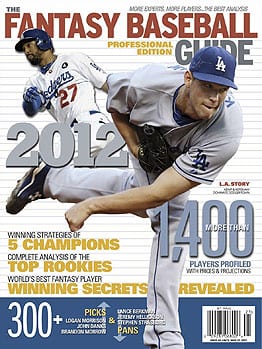 A couple of Dodgers share cover boy status for the 2012 Fantasy Baseball Guide.

Believe it not, it has now been eight years since I was a young boy making my first appearance on RotoMan’s legendary Fantasy Baseball Guide. Okay, so perhaps I wasn’t exactly all pink and fearless even back then, but the point is, I’ve aged over a dog year since first contributing to this superb publication, and over time it’s become a rite of autumn, like the World Series, like the slowly baring trees, like putting gummy bears in my hot cocoa (okay, maybe that last one is actually a Tim-ism, but you get my drift).

Speaking of Tim McLeod, he was again part of helping make this mag an industry standard and it also featured the brilliant work of other RotoRob staples such as Buck Davidson and Herija Green.

The big change for 2012 is that the magazine is no longer driven to be the first to the stands. We decided this year to shift final production forward by several weeks, allowing more time to report on and analyze offseason player movement. The end result is that you get the same unparalleled expert commentary, but with the added bonus of more timeliness. Sweet!

Here’s a sampling of the goodies you can expect to find in this year’s edition:

The publication will be officially released on February 15 (I know what you’re thinking, and yes, I agree that this would make an excellent Valentine’s Day gift!), but could begin showing up on shelves of stores like Walmart and Barnes & Noble sooner than that.

By RotoRob
Tags: Fantasy Baseball Guide, RotoMan
This entry was posted on Thursday, February 2nd, 2012 at 2:41 pm and is filed under BASEBALL, Buck Davidson, Herija Green, Magazine promo, RotoRob, Tim McLeod. You can follow any responses to this entry through the RSS 2.0 feed. Both comments and pings are currently closed.