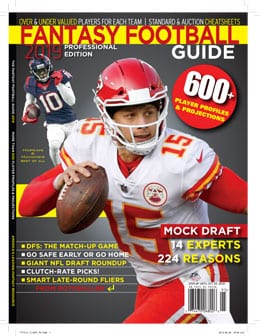 What will 2018 runaway MVP Patrick Mahomes do for an encore?

RotoMan‘s superb annual Fantasy football magazine, The Fantasy Football Guide, is now out, and once again RotoRob himself was involved in the writing of the publication.

As per usual, current and former RotoRob.com writers played a huge role in the creation of the 2019 Fantasy Football Guide, which this year features co-cover boys Patrick Mahomes and DeAndre Hopkins.

Besides us, former/present RotoRob.com writers that worked on this issue are: Andy Goldstein, Derek Jones, Matt Wilson and Herija Green.

The 2019 Fantasy Football Guide also launched an online version this week, available here. Because we love our readers so much, we’ve worked out a $1 savings off the cover price when you buy the PDF version of the mag online. Simply use promo code Rob19 and you’ll save $1. Yup. We are that good to you.

This year, we’ve added a strategy article by Nick Zylak of TheFantasyFootballAdvice.com about avoiding risk in the early rounds, and there’s a piece from Rotoballer.com‘s Nick Mariano touting some late-round flyers for each position. Also, Doug Orth has a story about handicapping matchups for DFS that looks like it might be useful in season-long play as well.

The usual excellent staff writers put together the position lists and team pages.

Finally, we have to give a shout out to Bob Lung, whose book — from which his annual Consistency column is derived — won Best Fantasy Football Publication of 2018 from the FSWA.

Other features of the 2019 Fantasy Football Guide:

You really need to have this mag on draft day. Going in without it is like skydiving without a parachute — not advisable.

Look for the 2019 Fantasy Football Guide in bookstores near you or purchase it online here and save a buck off the cover price by using promo code Rob19.

All Saints, the English-Canadian all-girl group, launched in 1993, and despite a couple five-year breaks, are still active today. The opening track from its 1997 debut eponymous album was “Never Ever,” also released as the disc’s third single.

Now it’s your turn. Let us know in the comments below what you think of this year’s guide.

Now, about that offer we alluded to. Once again, we’re giving RotoRob.com readers a chance to save $1 when they order the online version (US$7.99; you need a web connection to view it, but it auto formats to any device or screen) or PDF version (US$9.99; this is a download that can be read on your device, best viewed on a desktop, laptop or tablet) of the magazine.