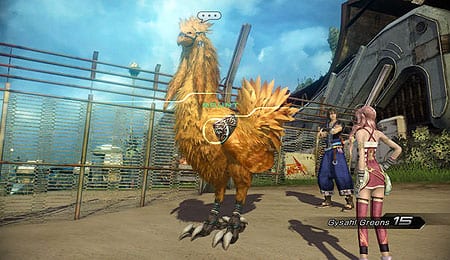 This must be 400 AF because in 4XX AF there’s a strict Chocobo leash law.

I’ll admit it: I was late to the party. Final Fantasy held almost no meaning to me until the buzz around FFVII grew deafening. Fifteen years have passed since I invited Cloud, Tifa and Cait Sith into my home, and in that time I haven’t missed an installment. While each had their pros and cons, it’s hard to argue that any of them were more “controversial” than Final Fantasy XIII, which introduced a fast-paced battle system and taught Square-Enix a very valuable lesson — that in the world of RPG aficionados, “linear” is a four-letter word.

Now two years later, Square-Enix is revisiting the world of Gran Pulse to create a direct sequel for only the second time in the series’ history with Final Fantasy XIII-2. While many of the original’s features return in modified form, the pre-determined progression that angered many in FFXIII has been blown up in favour of a very open adventure. However, does that make it a better game?

Combat has been tweaked, but with the Active Time Battle system returning it once again puts a premium on entering commands quickly. In fact, the pacing has actually been amped up a notch or two, especially when executing the game’s signature paradigm shifts. Even with the blistering pace, the game remains easy to control. About the only issue I encountered was on-screen effects sometimes making it difficult to keep track of which commands you’re inputting.

Cinematic action sequences (AKA, quick time events) have also been introduced to supplement some of the larger boss fights. Here you’ll need to press a button or move the analog stick in a specific direction to successfully complete the moves. It’s not a new concept, but it’s done well here as a timer counts down around the command you need to mimic so that it never feels cheap.

In-game controls feature the biggest flaw, which is how imprecise the attacks are that trigger the actual battles. How it works is when enemies appear a clock begins to count down. If the clock runs out or you make contact with an enemy the fight begins. However, if you strike your enemy first you get an immediate attack and an initiative bonus. Against higher-level enemies it can make a real difference as to how tough of a fight you’re in for. Unfortunately it’s not always easy to pick up where the enemies appeared from, and then even when you spot them it’s easy to miss (repeatedly) with your strike.

When it comes to graphical excellence, the Final Fantasy series has always seemed to stay ahead of the curve; and in some regards FFXIII-2 holds true to form. The cinematic cut scenes are, as you’d expect, absolutely fantastic. Battle sequences are also impressive, though with the pacing cranked up the screen can become so busy that it’s hard to appreciate all the attacks and spell effects.

Environmental design is a bit more hit or miss with some really lush and interesting locales (Sunleth Waterscape, Academia), a few lackluster creations (Augusta Tower — complete with annoying filter) and some moderately altered versions of areas seen in the last game (Oerba, Archlyte Steppe). That lack of freshness coupled with minimal graphical improvements over its predecessor works to diminish the game’s visual wow factor.

Eschewing the traditional expanding party motif for a two-person team placed a lot of importance on getting quality performances from the voice actors behind Serah and Noel. Both of them deliver and come across as more likeable than the uneven team from FFXIII. Supporting roles are handled well, even if Mog can get a little too cutesy (kupo). The soundtrack is also very good with a nice mix of musical styles to accompany you on your lengthy journey.

Three years have passed since the bittersweet conclusion of Final Fantasy XIII, and we come to find out that Lightning mysteriously vanished following the final battle and is now presumed dead. The opening cinematic debunks that theory in short order, however, as Lightning is seen to be alive and serving in the role of a “Warrior Goddess” in the land of Valhalla.

During a fierce battle with the mysterious Caius, a man with purple hair whose ridiculous sword makes Cloud’s iconic blade look like a pocket knife, a time portal opens and Noel appears. Sensing she needs help, Lightning dispatches Noel to travel back in time to retrieve her sister, Serah, and reunite the two of them in Valhalla. If you’re groaning right now based on years of recycled time-traveling clichés in sci-fi films and the confusion that invariably stems from them I’m afraid I’ve got some bad news: it’s gonna be one of those kind of plots.

Clearly FFXIII took its share of slings and arrows (to the knee) for delivering such a linear experience, but in some ways it feels like the sequel overcompensated. The story’s nuances are difficult to follow and full of confusing “paradoxes” where you encounter multiple versions of the same people and actions somehow send ripples through time into both the past and future. It’s not a poorly written or acted story; it just doesn’t always click. Thankfully the overarching plotline of trying to find Lightning is easier to follow and provides all the impetus needed to keep pushing forward.

As mentioned, Final Fantasy XIII-2 once again features the Active Battle System. It’s received some adjustments here and there, but if you didn’t like it the first time around it seems dubious to believe enough has been altered to change your mind. The biggest departure is that, instead of a revolving group of six characters with three active at a time, you are limited to just two playable characters throughout the game. And that third battle slot is reserved for a monster.

Yes, your choice of a wide array of monsters is now part of your squad. Monsters are captured in battle and broken down based on several factors, most importantly their role (Medic, Commando, Ravager, etc.) and rank (scale of 1-5 to determine how strong it can be). You’ll have three monsters active in your party at all times that can be rotated through via your customizable paradigms. Each has a “Feral Link” meter that builds when they’re in the active group and can unleash a special attack when it’s full. They grow in strength by feeding them specific items; and they can even be renamed and dressed up in silly attire.

The battles themselves are incredibly fast paced with many clocking in at less than 15 seconds, which indirectly speaks to the modest challenge afforded throughout much of the primary quest. Unlike the previous game where staggering opponents was essential to quick victory, here you’ll often destroy lesser foes before they even become staggered. Paradigm shifts can also be executed much quicker and allow you to be in almost constant motion on the battlefield.

Adding to the simplicity of the combat is an “Auto-Battle” function that is capable of guiding you to victory nine times out of 10. Only bosses and strong foes ever necessitate a truly hands on approach with individual attacks. And even then your focus tends to be on monitoring your health and the timing of paradigm shifts to the point that a quick computer-endorsed attack is often a more prudent strategy than taking the time to pick each skill usage yourself.

Every battle is once again scored, earning you money, loot and Crystarium points. As with the ATB system, Final Fantasy XIII-2 also welcomes back the leveling method from its predecessor. It, too, has undergone some modifications as the Crystarium is now a singular pathway and no longer broken down into separate roles. Now you simply choose which role you’d like to level up and the Crystarium grants you new abilities and an associated magic, power or hit-point boost.

After completing a full rotation, the Crystarium expands and you’re able to choose a new skill — this can include additional roles, more carrying capacity for accessories, uniquely powerful abilities and more. It’s more streamlined yet not as effective in developing your character the way you want. Before you could gauge whether a particular peripheral bonus was worth the points and act accordingly. Here the computer tells you how much you developed after the fact.

Although many of the differences between FFXIII and its sequel can be chalked up to refinements, the one area where FFXIII-2 is markedly improved is in the amount of freedom you have. Whereas the last game dictated where to go (and often who could be in your party), this time there’s lots of areas to explore and side quests as far as the eye can see.

There’s a lot more than just non-linear paths to bear this out, too. Worlds can be revisited and, if you can find the proper item, even restarted from scratch to correct mistakes you might have made or enter a gate you bypassed on your first trip. To that end, the game scatters some 160 memory fragments across time and space and challenges you to find them; an undertaking sure to keep completionists busy long after the credits roll some 40 or so hours into your initial playthrough.

In a perfect world, Final Fantasy XIII-2 would’ve retained the focused storytelling of the original while still opening things up for more freedom and exploration. And while FFXIII-2 doesn’t quite pull it all together seamlessly, it’s still a fun game with tons of replay value that definitely marks a step in the right direction for the series.

By Herija Green
This entry was posted on Thursday, February 2nd, 2012 at 12:33 pm and is filed under Herija Green, Video Game Reviews. You can follow any responses to this entry through the RSS 2.0 feed. You can skip to the end and leave a response. Pinging is currently not allowed.