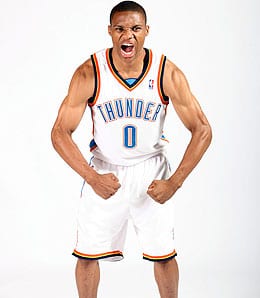 Can Russell Westbrook force himself into the elite PG status?

We’re back with more of the 2009-10 RotoRob NBA Draft Kit with the release of another team preview.

Many believe the actual team is about to undergo a renovation as well, poised to improve in the highly competitive Western Conference.

Count me among the believers in this team that has a core that’s so young and talented, however, regardless of the improvements the Thunder should undergo this season, it will still be quite a ways from competing from a playoff spot.

With the expected development of emerging superstar Kevin Durant, key youngsters Russell Westbrook and Jeff Green – not to mention the addition of impact rookie James Harden – the NBA’s fourth-worst team in 2008-09 should surpass Memphis and Minnesota this season. However, it may still be another year before the Thunder is ready to pass the Suns or Rockets – regardless of how much either of those teams continues to erodes from contender status.

Still, this team has a lot to be excited about. A full season of a better conditioned and finally healthy Nenad Krstic (who is looking strong at the 2009 Eurobasket) will be huge; coach Scott Brooks, having served as interim coach in the wake of the early-season firing of P.J. Carlisimo, was appointed as the official main man at the end of the season – a move that definitely had the players’ backing. Brooks will be helped out by an even more experienced staff this year with the hiring of former Sixer and Blazer head coach Maurice Cheeks as an assistant coach.

And then there is Durant. Looking at that roll he went on in January and February has to get Fantasy owners wet. This kid is ready to be a top five player. Oh, and by the way, he won’t be 21 until later this month. Green is 23, Harden and Westbrook are each 20. Both Durant and Westbrook are among the top youngsters in the game according to the OC Register and each of them is looking like slam dunks to make Team USA at the 2010 World Championships. Did I mention this team’s future is bright?

After winning a mere 20 games in their final lame-duck season in Seattle, the franchise showed progress last year, improving defensively and upping its win total slightly. But the fact that after a 1-16 and then 2-24 start the Thunder was able to recover and improve its win total is an accomplishment in itself. A 9-14 record over the final two months provided a glimpse that this team was on the right track. All it needs now is time for the youth to develop.

The city certainly embraced the team last year. The Thunder ranked in the top 10 in the NBA in both percentage of seats sold and ticket revenue – a very impressive feat considering OKC isn’t exactly a huge market. Once there’s a winner here – something not far off at all – you’ll have to kill someone to get a ticket to a Thunder game.

Harden is expected to start at shooting guard, but Sefolosha – a tremendous defender – could easily overtake him in time. Regardless of who is starting, I can see both of these two-guards being useful Fantasy plays.

Durant is already one of the NBA’s best, but as the team matures and more options emerge, opposing defences will really struggle to contain him. He saw a lot more PT last year, and really improved his rebounding numbers. This year, could 30 PPG be a possibility? I suggested he could approach that number last year, and he did top the mark, for one month at least.

Collison spent most of the year as a starter for OKC in 2008-09, but the late addition of Krstic really ate into his PT. Collison’s touches diminished last year, and with them so too did whatever Fantasy value he had. Now that Krstic is healthy and ready for a full load and Etan Thomas is in town, Collison’s role could erode even further.

Finally freed from Chicago where his role became less significant last season, Sefolosha showed across the board skills with the Thunder. Check out what he did in 14 March games, when given 33.9 MPG: 9.6 points, 5.3 rebounds, 2.4 assists, 1.9 steals and 1.5 blocks, all the while shooting 91.4 per cent from the line. He’ll have plenty of competition from Harden at the two-guard, but if the work Sefolosha has put in this summer at becoming a bigger threat away from the bucket bears fruit, he’s going to be provide serious Fantasy value at a bargain price. Think Delonte West-type numbers, with less treys but more boards.

No one will sleep on Westbrook, but after a huge Summer League showing, this youngster could be poised to take a serious step forward. The key for him will be improving his FG percentage and trying to develop an outside game, which deteriorated as the season progressed last year.

Livingston, still just 23, is apparently nearly past his ugly knee injury, and he’s now Westbrook’s main backup at PG. Remember what a Fantasy darling he used to be? The fact that Livingston saw time at the two and three during Summer League suggests that the Thunder will try to employ his versatility this season, so he could very well get enough PT to be a Fantasy factor.

Harden, considered a very low-risk pick, consolidated his big season at Arizona State by enjoying a very fine showing at Summer League. The third overall pick in the draft is already a polished offensive player, although he needs to work on his mid-range game. A superior defender, Harden has a legitimate chance of giving Blake Griffin a run for his money in the NBA ROY race.

B.J. Mullens, acquired from Dallas on draft day, has an opportunity to make an impact given the Thunder’s lack of depth at centre, but he needs plenty of seasoning still. The instincts are there; the polish isn’t. Mullens has the chance to be an athletic big man, but like many big men, he’s not exactly NBA ready.

Can Krstic get back to his pre-injury form? How much better can Durant get this year? Can Westbrook get his FG percentage to a more Fantasy-friendly level? Is Livingston’s knee ready to handle a full NBA season? Could Harden be a serious ROY contender?

By RotoRob
Tags: NBA Draft Kit, Oklahoma City Thunder, Russell Westbrook, The Ford Center
This entry was posted on Wednesday, September 9th, 2009 at 10:33 am and is filed under 2009-10 RotoRob NBA Draft Kit, BASKETBALL, RotoRob, Team report. You can follow any responses to this entry through the RSS 2.0 feed. Both comments and pings are currently closed.