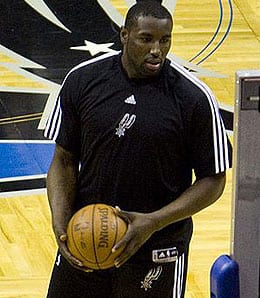 DeJuan Blair is on a nice run for the Spurs.

Welcome to the Week 16 edition of the Wire Troll, our weekly look at players that may be available on your league waiver wire, but could see a spike in Fantasy value due to a variety of circumstances.

Well, the NBA All-Star game is fast approaching, and this year’s picks brought the normal dose of controversy. One puzzles over the fans’ selection of Yao Ming, whose “action photos” over the past month and a half have looked something like this. Perhaps the Chinese television network is eschewing current NBA fare in favour of reruns of the 2008-09 season. Given Yao’s hefty All-Star vote total, CCTV must be better at recycling NBA footage than they are at covering Top Gun…errr…the latest in Chinese fighter jet technology.

Props to Western Conference head man Gregg Popovich for making things right and naming Kevin Love to serve as Yao’s replacement; this kid has been one of the league’s great breakout players, and far too few people have seen him play.

DeJuan Blair, San Antonio Spurs: The burly Blair has been on a nice run lately, averaging 10 points, 9.3 rebounds and 2.0 steals in his first three games in February. When you factor in his 9.1/7.8/1.1 line in January, it become apparent that Blair is playing himself into Fantasy relevance. Foul trouble remains his bane, so his minutes figure to be about as consistent as Lady Gaga’s fashion accessories. Keep in mind that the Spurs will almost certainly rest Tim Duncan frequently in the second half, freeing up the rock for Blair and the rest of the supporting cast.

Jason Smith, New Orleans Hornets: Smith went nuts in his first start in Emeka Okafor’s stead, scoring a career-high 20 points against Washington February 1. Things didn’t go so well in his next game, but with Okafor sidelined for up to three weeks, Smith should see close to 25 minutes per night in the short term. The third-year pro has averaged a modest 10.2 points and five rebounds in his six career starts, so don’t knock over the furniture in your race to add him to your roster. If you’re in a deep league, though, Smith should provide some short-term help at the centre position until Okafor returns. Note: ESPN does not recognize Smith as a centre.

Ersan Ilyasova, Milwaukee Bucks: Ilyasova has been really lighting the lamp lately, averaging 18.4 points, 8.6 rebounds, 2.2 steals and one trey over his past five games. He made his second and third start of the season at centre this past week (spelling Andrew Bogut), so he may be on his way to gaining eligibility at that prized Fantasy position. Bogut is not expected to be out very long, but Ilyasova will simply swing back to the four when the big Aussie makes it back onto the floor. Grab Ilyasova while he’s on his current hot streak; hopefully he can sustain this high level of play for the long term.

Amir Johnson, Toronto Raptors: What, you don’t have him yet? All Johnson has done over the past eight games is average 16.4 points, 8.6 boards, 1.1 steals and 1.4 blocked shots. The Raps are really hurting for frontcourt production, so AJ is seeing all of the run he (and his propensity to hack) can handle: almost 33 minutes per night over that period. Johnson’s ownership is around 64 per cent in Yahoo! leagues, and around 55 on ESPN, but it’s climbing fast, so now is the time to act. The Troll doesn’t see his recent run as a hot streak, rather as a new norm now that he has a full-time starting job. The Raps are falling faster than the mercury in Iroquois Falls, so we don’t anticipate Johnson’s playing time being negatively influenced by any blockbuster moves. One can only hope that the Raptors play well enough so that their fans don’t seek out other sources of entertainment. Brrrrr. [Editor’s note: In fairness, Northern Ontario is nowhere near Toronto.]

Anthony Morrow, New Jersey Nets: Morrow strained a hammy back on December 14, missed 17 games, then came off the bench for a spell. That spell ended Friday night, when the Nets plugged Morrow back into his familiar spot in the starting five. He went off for 22 points and three treys, and added three assists for good measure. This is no anomaly; Morrow had quietly (which is the way non-Carmelo Anthony-related hoops things happen in Jersey) averaged 15.2 points and 2.2 treys over his last five games in January. The extended absence caused Morrow to fall out of Fantasy favour, and he may still be languishing on your league’s waiver wire. Remedy that situation, please.

Sam Young, Memphis Grizzlies: O.J. Mayo’s suspension ends February 15, but until then Young looks like he’ll be a decent source of points for owners in deep Fantasy formats. He has strung together five straight double-digit efforts, and is averaging 18.5 points and two steals in his first two games in February. He was starting prior to Mayo’s suspension, but his numbers were not worthy of Fantasy consideration. Add Young if your league runs deep, then watch how his numbers react when Mayo makes his return.

By Buck Davidson
This entry was posted on Saturday, February 5th, 2011 at 4:21 pm and is filed under BASKETBALL, Buck Davidson, The Wire Troll. You can follow any responses to this entry through the RSS 2.0 feed. You can leave a response, or trackback from your own site.