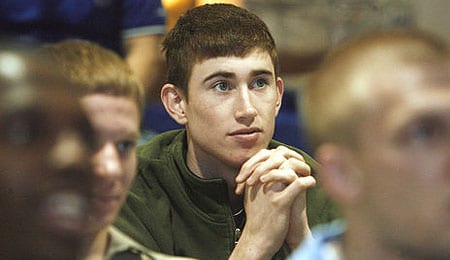 If Gordon Hayward had been praying for a chance to start, it’s sure not showing with his play.

With Raja Bell out, highly-touted rookie Gordon Hayward has gotten a chance to start the past three games, and while it’s nice to see him at least get back in the rotation after rotting on the bench for most of November, he’s doing absolutely jack squat with this opportunity.

Thanks to foul trouble and ineffectiveness, Hayward hasn’t seen any more than 18 minutes of action in any of his starts – which obviously limits his ability to do any damage. I still like his long-term prognosis, but it’s clear that he is not the Kyle Korver replacement we projected him to be back in the preseason.

Reports I’ve read suggest that Hayward’s confidence is just shot now, and he’s apparently very wary to put up a shot, instead swinging the ball when he has a chance to score. One writer suggested he’s afflicted with Chuck Knoblauch disease. None of this bodes well for this particular rookie emerging with value at any point this season, especially with the Jazz humming along in first place in the Northwest Division.

Keeper league owners may want to stash Hayward, but in redraft leagues, it’s obviously going to take more than just an injury to Bell for the rookie to be even remotely worthy of Fantasy consideration. Besides, Bell was a game-time decision on Monday, so Hayward’s run as a starter won’t last much longer if at all.

Well, the Hornets played the Heat tough for a while Monday before allowing Miami to go on an 18-2 run that sealed the game. D’oh. So much for New Orleans’ 11-1 start. The Hornets have now lost on back-to-back days and have dropped nine of their past 12 games. And the offense has been stuck in neutral, having gone 13 straight games without reaching triple digits. It’s been a frustrating run for Fantasy owners of virtually any Hornet.

Take Marco Belinelli, for instance. He’s wound up on the waiver wire of most leagues after his hot start to the season fizzled. The Hornets’ starting two-guard starting show a bit of life again last week, but then he put up back-to-back stinkers in the past two games. On Monday, he did can New Orleans’s only 3-pointer, but it took him seven attempts to get that and he was just 2-for-9 overall with only nine points, two assists, one board and no steals or blocks. Clearly, you can do better on your league’s wire. I’m confident Belinelli will emerge with value again once his shooting touch returns (and it’s not as if Marcus Thornton is eating into his minutes – Thornton has taken DNP-CDs in three of the last four games). Standard league owners should have cut Belinelli already; in deeper leagues, I’d keep him for now and see if he can work his way out of this slump; as long as he’s starting, there’s hope.

Jason Smith is a player that intrigues me somewhat as he’s occasionally flashed skills when he gets PT, but those minutes are way too inconsistent for him to offer value, even in deeper leagues. He pitched in with a block and four boards Monday, but over the past few games his run of 15 to 24 MPG has ended, as he’s seen just 24 minutes total in the past three. Still, if David West goes down with an injury, it’s Smith that stands to gain. But for now, he’s just a role player, and since New Orleans has been losing, there seems to be less minutes for players like him.

Meanwhile, all that talk about the Super Friends’ inability to gel has quieted as the Heat have now won by double figures nine straight times. Zydrunas Ilgauskas continues to start for Miami, and deserves a look in deeper leagues as he’s producing enough big-man numbers to have use. On Monday, the Big Z pulled down eight boards, had three blocks and contributed a steal. He’ll continue to see decent PT because of the chemistry he has with LeBron James; the two of them sure know how to run the pick-and-roll together. While Ilgauskas hasn’t provided the type of return I thought he might once Udonis Haslem went down, he’s still doing enough to warrant a spot in leagues larger than 12 teams.

Another Miami non-Super Friend that deserves a look in larger formats now is Mario Chalmers, who continues to come off the bench but also continues to play more than starting PG Carlos Arroyo. On Monday, Chalmers earned at least one steal for the sixth straight game (twice in that stretch he’s put up a pair of thefts) while also managing six points and three assists. He was 0-for-3 from beyond the arc, but had knocked down two treys in each of the three previous games before Monday. What worries me here are Chalmers’s shooting struggles, as he’s just 3-for-12 in the past two games and a horrific 33.8 per cent for the season. He’s never been an accurate shooter – and has slid in this regard since his rookie season — but you had to figure he’d at least be capable of sinking 40 per cent of his attempts.

Juwan Howard has worked his way into the Heat rotation in recent weeks, but a look at his line Monday tells you all you need to know about him: 10:13 played, one steal. And that’s it. Oh, sorry…he did manage to rack up a couple of fouls. The final member of the Fab Five still standing in the NBA, Howard is now 37, and obviously wants that last crack at a ring, but it’s really time for him to sail off into the sunset.

By RotoRob
This entry was posted on Tuesday, December 14th, 2010 at 6:40 pm and is filed under BASKETBALL, NBA Today, RotoRob. You can follow any responses to this entry through the RSS 2.0 feed. You can leave a response, or trackback from your own site.