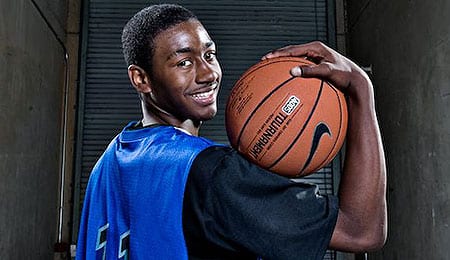 If you don’t have to reach for him, John Wall will deliver serious dividends to your Fantasy team.

The 2010-11 RotoRob NBA Draft Kit rages on today. So while the Cleveland Cavaliers’ unsuccessful plight to keep LeBron James in town by hiring a big-name coach unfolds, let’s take a look at ten rookies that could help you Fantasy team this season.

1. Blake Griffin, PF, Los Angeles Clippers: Yes, 2009’s top pick is still a rookie, having had his entire 2009-10 season wiped out by injuries. Griffin excels at getting to the free throw line, but unfortunately sinking those freebies is still a problem, and probably the only thing – other than health – that is holding him back from becoming an NBA superstar. Still, he’s big and strong and is an excellent post player that should be a monster rebounder. Griffin’s ability to score with his back to the basket will also stead him well in the NBA. He’s completely healthy now, and ready to make his mark, and the best part is, plenty of owners will sleep on him come draft day after his lost 2009-10 campaign.

2. John Wall, PG: Washington Wizards: In a word, this kid is talented. Wall can get in the lane to create offense either for himself or for his teammates. He’s a superb athlete, with good size for a point guard (6’4″) and he’s damn fast – a combination that makes his potential sky high. Wall may need to add a bit of strength before he reaches his ultimate potential, but the Wizards have essentially turned their team over to him even though Gilbert Arenas is still there. I wouldn’t reach for Wall too early, but if he somehow falls to you in the middle rounds, jump all over this kid.

3. DeMarcus Cousins, PF, Sacramento Kings: Cousins is another big man that has shown he’s capable of drawing fouls, but he needs to hone his skills from the charity stripe, having sunk just 60.1 per cent of his free throws in his final college season. His tremendous rebounding ability could make him a monster big man in the NBA. Cousins has also shown the ability to score in traffic and clean up around the basket – two qualities that could make him a superb Fantasy asset in time. Yes, he comes with plenty of baggage about his attitude and reputation as a head case, and there also questions about his conditioning, but assuming his minutes are brought along at a pace he can handle, Cousins has as much upside as any rookie on this list.

4. Wesley Johnson, SF/SG, Minnesota Timberwolves: If you’re looking for a sleeper ROY candidate, look no further than Johnson, projected to start for the T-Wolves. A potential Shawn Marion-type, Johnson is an efficient scorer that has a great stroke from 3-point land. He’s also lauded as a great team player, which will stead him well in Minnesota where losing has become a way of life in recent years. Johnson is an excellent athlete, but he needs to get stronger and improve his ball-handling skills. There’s a chance he could play at the two this season, a move that would give the 6’7” Johnson a big size advantage, but also one that might expose his ball-handling deficiencies and hurt him in leagues where turnovers count.

5. Derrick Favors, PF, New Jersey Nets: Favors is another fantastic athlete with tremendous, but raw abilities. He’s got double-double capability, but he needs to use his size and athleticism on a more consistent basis to dominate the way many envision he’ll be able to. Favors will start the season coming off the bench, but he if can put up more performances like he did in the Nets’ pre-season opener (14 points, nine boards), he’ll earn plenty of PT as the first big off the bench.

6. Evan Turner, PG/SG, Philadelphia 76ers: I was more bullish on Turner when I thought he was going to be the Sixers’ starting two-guard, but now it appears he’ll see backup duty at PG to begin the season. He’s 6’7” with respectable passing and ball handling skills, so there’s a chance that Turner could become a super-sub, backing up the 1, 2 and 3 positions for Philadelphia. If that happens, he’ll definitely have sixth man value at least, with an upside through the roof (think Brandon Roy). For now, Turner will need to work hard to show that his poor Summer League was just an anomaly.

7. Greg Monroe, PF, Detroit Pistons: Lauded for his decision-making skills, Monroe has a chance to be a key component of Detroit’s rebuilding process. Like many young big men, he needs to beef up to be able to handle the banging and crashing underneath an NBA basket, but the seventh overall pick in 2010 is extremely skilled and his back-to-the-basket game is advanced. I expect Monroe to be a major contributor in Detroit this season, making him a fine speculative late-round Fantasy pick.

8. James Anderson, SG, San Antonio Spurs: Anderson is a pure scorer and also developed into a solid leader at college. He’s a skilled pick-and-roll player that can also drain it from outside. Anderson, the 20th overall pick in the draft and Big 12 Player of the Year, could also see time at the three backing up Richard Jefferson, something that would make him more valuable as a Fantasy contributor. The Spurs have a tendency to rest their vets, and with a fragile Manu Ginobili and ineffective (last season, anyways), RJ ahead of him, Anderson could get more PT than you’d think.

9. Larry Sanders, PF, Milwaukee Bucks: Is it time for the Larry Sanders Show in Milwaukee? Well, the Bucks are as deep a team as any in the NBA this season, but Sanders has a chance to be a real shot-blocking machine with his massive wingspan (he averaged at least 2.5 BPG in each of his last two seasons as VCU), and that’s an area Milwaukee could use some help in. Unfortunately, Sanders’s post game needs work, and that will limit his offensive upside.

10. Cole Aldrich, C, Oklahoma City Thunder: A true centre, Aldrich has plenty of size and is known for giving a 100 per cent effort at all times. Unfortunately, he is not an offensive threat, so Fantasy owners will mostly be interested in his rebounding and shot blocking. Aldrich is in the mix for the starting centre job on the Thunder, so if nothing else he has plenty of opportunity as a rook, and that makes him worth a speculative pick.

Other Rookies to Watch

By RotoRob
Tags: 2010-11 NBA Draft Kit
This entry was posted on Tuesday, October 5th, 2010 at 8:13 pm and is filed under 2010-11 RotoRob NBA Draft Kit, BASKETBALL, Cheat sheets, Rookies, RotoRob. You can follow any responses to this entry through the RSS 2.0 feed. Both comments and pings are currently closed.