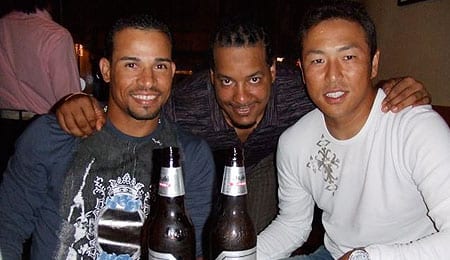 Hey, Hiroki: You’re invited to the Big Apple. But your friends, Raffy and Manny? Not so much.

In this week’s episode of RotoRob’s Fantasy Baseball 365 Podcast, Buck, Tim and I turned our attention to the East (well, in fairness, Tim’s attention is pretty much always focused in that direction) as we looked at a trio of Japanese players that found new homes in the past week.

In the course of a half hour, we covered a wide range of topics, including:

As always, the 30 minutes whipped by like an icy blast of Northern Ontario wind, but as always — it was not without its share of hilarity. Click the play button below to hear the show in its entirety.

By RotoRob
This entry was posted on Friday, January 20th, 2012 at 1:35 pm and is filed under BASEBALL, Buck Davidson, Podcast, RotoRob, RotoRob's Fantasy Baseball 365, Tim McLeod. You can follow any responses to this entry through the RSS 2.0 feed. You can skip to the end and leave a response. Pinging is currently not allowed.