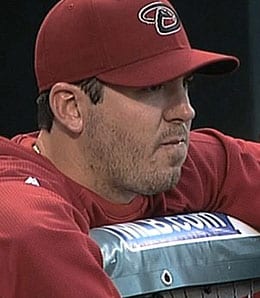 Apparently, Joe Saunders struggles to assess his own value.

It’s official: Joe Saunders has re-signed with the Arizona Diamondbacks, but it wasn’t easy and it sure wasn’t a pretty courtship.

Saunders enjoyed a surprisingly good season, solid enough for him to earn a spot on the coveted NL All Wire Troll team.

After all, pitching in hitting-friendly Chase Field he managed to chalk up a career-best 3.69 ERA and get back to double-digit wins for the first time since 2009.

Saunders even trimmed his usual lofty hit rates. He was able to go deeper into games by keeping his pitch counts under control (just 97.5/game).

Clearly, there was a lot to like about Saunders’ 2011 season.

He earned $5.5 million last year and was due a bump of about $3 million in arbitration, so the D-Backs said “seeya” and non-tendered him. Really?

But clearly, Arizona wasn’t averse to bringing Saunders back… just not at that price tag. So the Snakes offered him a two-year deal, $12-million deal. Saunders, seeking a three-year deal and apparently — at least in his own estimation — on every team’s list of attractive pitchers, said “no, thanks,” so Arizona rescinded the offer.

And off he went, shopping for another deal that never came at the money he was seeking. So what happens? Saunders re-signs with Arizona for just one year at $6 million.

Major burn, dude. I bet Saunders is feeling a bit stupid right now. I guess he’ll have to figure out a way to crave out a decent life on just a $6 million deal.

The thing is, Saunders isn’t nearly as good as his ERA suggested. His FIP was over a run higher, and he’s never been a strikeout pitcher, so is a really poor asset in 5×5 leagues. Saunders gave up a crapload of dingers last year, and it’s doubtful that number will drop much. But when his BABIP normalizes back to its usual rates, there will be more runners on base when he does cough up dingers.

In a nutshull, don’t draft Saunders thinking he’s going to have another sub-4.00 season.

Well, negotiations went right down the wire, but the Texas Rangers finally closed the deal with Yu Darvish, penning him to a six-year, $60-million deal. The Japanese hurler can opt out of the final year if he reaches certain performance indicators. Toss in the posting fee, and it cost Texas $111 million to get Darvish under contract. That’s $8 million more than Boston spent on Daisuke Matsuzaka, and for the sake of Rangers’ fans, he better provide more than $8 million above the value Dice-K has given to the BoSox. Everyone is raving about Darvish, but they also raved on and on about Matsuzaka. Just sayin’…

One fan that is doing cartwheels (that would be metaphoric cartwheels…his days of physical cartwheels ended many a decade ago) today is NPB addict and RotoRob Baseball Editor Tim McLeod. When he got the news Wednesday night, he IMed me on Facebook and I’m pretty sure there were emoticons involved.

Speaking of Tim, you can join him, Buck and myself Thursday evening at 11 p.m. EST for this week’s episode of RotoRob’s Fantasy Baseball 365, our weekly Fantasy Baseball Podcast. This week, we’ll talk about the Yankees emerging from their slumber to land Hiroki Kuroda and Tim will undoubtedly have many things to say about this signing plus the Darvish deal. After all, he lives to talk about young Japanese boys. Tune in here.

By RotoRob
This entry was posted on Thursday, January 19th, 2012 at 3:21 pm and is filed under BASEBALL, MLB Today, RotoRob. You can follow any responses to this entry through the RSS 2.0 feed. You can leave a response, or trackback from your own site.