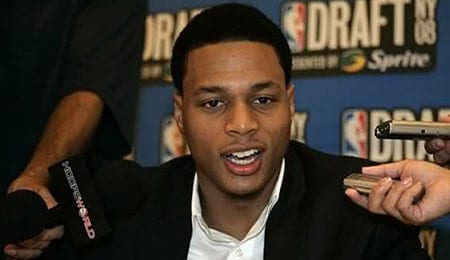 Brandon Rush is getting his shot with the Warriors.

Yo, hoops fans! We’re back with another helping of waiver wire recommendations to help you dominate your Fantasy basketball leagues. Bear in mind that players must be owned in less than 50 per cent of Fantasy leagues to qualify for inclusion here.

Okay, with the small print out of the way, let’s get this party started.

Brandon Rush, Golden State Warriors: Surprise, surprise… Stephen Curry is dealing with ankle issues again, and while he’s out, Monta Ellis has shifted over to the point, leaving Rush to inherit the starting two-guard slot for the time being. Rush, who dealt with his own ankle woes last season, hasn’t exactly exploded, but the opportunity is there. Thursday, he played a whopping 40 minutes and nailed three three-pointers with three assists and four boards as part of a 12-point game. Rush flashed potential with the Pacers, but now that he’s on the free-wheeling Warriors, he’s got a real chance to shine – at least for the time being. Some reports suggest that Curry may be back as soon as Sunday, but that sounds ridiculously optimistic. Expect Rush to hold this gig for the next week at least, after which he will resume his role as the sixth man, where he may still hold value in deeper leagues.

Rodrigue Beaubois, Dallas Mavericks: This is a deep league recommendation only, as starting PG Jason Kidd is expected to return to action Saturday, but Roddy Buckets showed some serious signs of life Friday, going off for a season-high 15 points, six boards, two assists and a trey in 24 minutes. Yes, the extra minutes came in a blowout win where Dallas had the chance to rest some starters, but his effort earned him some rare praise from Coach Rick Carlisle, so perhaps Beaubois is ready to start regularly seeing 20 MPG. A foot injury cost him most of last season, but when he finally made it back, he was a wire worthy choice. This dude can flat out fly, and while Dallas’ backcourt is a crowded place, Beaubois is worth monitoring because of his upside.

Shannon Brown, Phoenix Suns: With Grant Hill out, Jared Dudley has moved over to SF, giving Brown a chance to get some burn at the two in Phoenix.

Delonte West, Dallas Mavericks: West has been starting at PG with Kidd out, but the former Saint Joseph’s star is less likely than Beaubois to retain value over the long haul, so he’s a short-term add only.

Kawhi Leonard, San Antonio Spurs: Gary Neal got the first crack at replacing the injured Manu Ginobili in the Spurs’ starting five, but when his shot stopped dropping, the Coach Gregg Popovich opted to go to the rookie Leonard. Prior to the 2011 draft, we projected Leonard as an NBA role player, so the fact that he’s already getting a shot to start is a nice bonus. He’s shown a real nice touch from the floor, helping him rack up four straight double-digit scoring efforts while pulling down 6.5 RPG over that stretch. Toss in two steals and nearly a block per game and you’ve got a dude that has to be grabbed while Manu is sidelined for the next few weeks. Note that Leonard only qualifies at SF (hence his inclusion here), but he should soon gain SG eligibility in most leagues.

Daniel Green, San Antonio Spurs: Green is another Spur swingman who is benefiting from Ginobili’s absence. He was really off the radar as a rookie in Cleveland, but Green got a bit more burn in his first campaign with the Spurs last season. This season, he’s getting a chance to make a difference, having played 30 or more minutes twice over the past five games and responding with a stat-stuffing showing of 13 points, six boards, three blocks, two assists, two trifectas and a steal on Friday. Just beware that — out of the blue — Green went off for 24 points last Saturday, but had almost fallen off the radar until Friday, so he’s capable of pulling a Houdini. Still, he’s got our attention with his potential for across-the-board production.

Ivan Johnson, Atlanta Hawks: Who? I know. What the hell’s going on in Atlanta? All the injuries have opened the door for some obscure names, and Johnson – a 27-year-old rookie! — is the latest to emerge, but 12 points and seven boards in 21 minutes off the bench before fouling out Thursday has put him on the radar.

Tyrus Thomas, Charlotte Bobcats: With Corey Maggette out, Thomas is now starting at SF in Charlotte and his ability to score, rebound and block shots makes him an intriguing option.

Zaza Pachulia, Atlanta Hawks: Pachulia has been a key bench player for the Hawks for a long time now, but he hasn’t flirted with Fantasy value for eons. With the season-ending injury to Al Horford, however, that has changed as Zaza finds himself starting in Atlanta again. Need some low level help in the middle? Pachulia’s your man. On Thursday, he put up his second straight double-digit scoring game while also reaching double digits in boards and pitching in with a block. It’s nothing sexy, but considering Jason Collins is Pachulia’s only competition in the middle on Atlanta, he’ll be good for at least 30 MPG.

Josh Harrellson, New York Knicks: Harrellson has been supplying some much-needed offense for the Knicks’ bench, a reserve squad that was limited to just three points Monday against the Bobcats. The rookie has earned a spot in the rotation, averaging over 23 MPG per game over the last five and seeing nearly 30 on Thursday. Harrellson’s scoring has been inconsistent, but his shots have been dropping and with Carmelo Anthony doubtful for Saturday, the kid could see a few more touches. The Knicks’ second rounder has been gobbling up the backup big man minutes making him an intriguing option in deeper leagues.

Andris Biedrins: Kwame Brown is pretty much done for the season, giving Biedrins a chance to earn some burn. He’ll be a low-end option for boards and blocks with more guaranteed PT going forward.

Ed Davis, Toronto Raptors: Davis got the start Friday with Andrea Bargnani dealing with a calf woe, and while he struggled with his shot, he did pull down 10 boards, dished out three assists and had a block.

By RotoRob
This entry was posted on Saturday, January 14th, 2012 at 4:03 pm and is filed under BASKETBALL, RotoRob, The Wire Troll. You can follow any responses to this entry through the RSS 2.0 feed. You can leave a response, or trackback from your own site.