The Wire Troll: T-Mac is Back – For Now 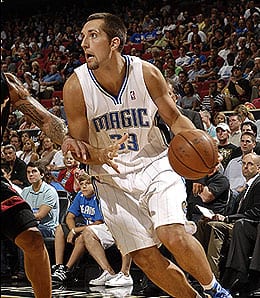 Ryan Anderson has been one of the hottest pickups in recent weeks.

Welcome to the Week 15 edition of the Wire Troll, our weekly look at players that may be available on your league waiver wire, but could see a spike in Fantasy value due to a variety of circumstances.

Well, the Troll is back in the Big Chair this week, and thankfully my little corner of the Troll Cave survived the onslaught of RotoRob the Neatness Nanny while he manned my post last week. Perhaps it was simple human cooperation and a sense of mutual understanding that inspired him to keep his hands (and Shop-Vac) away from my space. More likely, though, it had something to do with the e-mail I sent Rob one day into my road trip – in which I detailed the sudden disappearance of my prized collection of tarantulas….and could he keep an eye out for them while he was anywhere near my desk. I had heard that the Boss loves spiders the way the Bengals love Super Bowl titles, and I am happy to report that my desk showed no signs of human habitation nor intervention upon my return.

I appreciate the e-mails thanking me for whatever role I played in convincing ESPN that J.J. Hickson deserved centre eligibility, and for those of you seeking my secret, I can only answer that the fear of crawly creatures extends far across the land…and that those missing spiders have to be somewhere, now don’t they?

My road trip took me dangerously close to the Canadian border, and I briefly entertained thoughts of visiting RotoRob baseball maven Tim McLeod in his palatial igloo somewhere near Kimbrel, Saskatchewan. My plans changed when my request for a weather report resulted in Tim sending me this video. It wasn’t so much the cold that ran me off, but that scary music in the background definitely sent a chill down the Troll’s hardy spine. Silly me, I thought everyone in the Great White North went for stuff like this. Rock on, Tim…or samba in the snow, as you see fit.

Kendrick Perkins, Boston Celtics: Perkins made his first appearance of the season on Tuesday, after missing the Celts’ first 43 games while recovering from ACL surgery. He has averaged 6.3 points and 6.3 boards in his first three games back, but those numbers are bound to grow as his playing time increases. Perkins averaged 10.1 points, 7.6 rebounds and 1.7 blocks last season, but his injury situation caused him to go undrafted in most leagues this season. While he is off to a slow start, Perk’s track record should make him a must-add in deep Fantasy leagues, and he is worth monitoring in just about every format.

Marcin Gortat, Phoenix Suns: The Troll sang his praises not too long ago, but his beastly 19-point, 17-rebound performance Friday has inspired us to sing…no, this time we’re gonna yell – a little louder. Gortat is owned in only 30 percent of Yahoo! leagues, but he has averaged 12.8 points, 10.8 boards and 1.2 blocks over his past six games. Throw out his 10-minute stinker against Philly, and those numbers balloon to 15/12.6/1.2 over five games. He has clearly outperformed starter Robin Lopez of late, and the Troll wonders how much longer it will be before the Suns catch a few Batman reruns and realize that “Robin” should be a sidekick, not the main guy. Grab Gortat if he’s out there; his Fantasy ownership is bound to skyrocket after Friday’s dominant performance.

Ryan Anderson, Orlando Magic: Anderson’s ownership has steadily increased over the past few weeks, and it’s easy to see why: 14.6 points, 5.8 boards, one block and a ridiculous three treys per game in January. Anderson is considerably more valuable in Yahoo! leagues, as he carries centre eligibility there, but numbers like his – especially those three-bangers – are welcome in most Fantasy lineups. Anderson’s Yahoo! ownership is approaching 60 per cent, so this is something of a Wire Troll “last call,” but his consistent production should certainly warrant your glancing at your league wire to see if he’s available.

Paul George, Indiana Pacers: With Brandon Rush sidelined by a sprained ankle for the next two weeks or so, George is primed for a significant increase in minutes. Though he is still coming off the bench, the swingman has averaged 14 points, one trey and 1.7 steals over his past three games. He has logged at least 24 minutes in each of those games, and that kind of workload should be standard fare with Rush – and to a lesser extent Tyler Hansbrough – hurting. Don’t look for big supporting stats, as George is primarily a scorer, but he should chip in more than his share of steals while he’s seeing regular minutes.

Tracy McGrady, Detroit Pistons: Any analysis regarding T-Mac always contains the qualifier “when healthy…” Well, now is one of those “whens,” as the fragile veteran has flourished since the Pistons shifted him to point guard. Over his last three games, McGrady has averaged 16 points, seven rebounds, 7.7 assists, and — here’s the scary part — over 36 minutes per outing. T-Mac should be owned in all leagues while Detroit is running its offense through him, but be warned that the perennially fragile veteran almost certainly cannot sustain this heavy workload for very long. Enjoy it while it lasts, but be prepared to bail when the train reaches the station…or derails.

Carlos Delfino, Milwaukee Bucks: Delfino returned to the court January 21, marking his first appearance since suffering a concussion in early November. He started slowly, but has averaged 15 points, three treys, five assists and 1.5 steals over his past two games. Delfino is in a time-share, but he’s seeing plenty of minutes — and when he’s going well he can fill up a box score with the best of them. He’ll have his off nights, but he’s just too talented to languish on the waiver wire much longer. Hurry on this one, kids — your window of opportunity may be closing fast.

Randy Foye, Los Angeles Clippers: With Eric Gordon sidelined three-to-four weeks with a sprained wrist, Foye steps to the fore as a prime backcourt scoring option for the Clips. In his first two games as a starter since Gordon went down, Foye has averaged 17.5 points, 2.5 assists and two treys per outing. Foye won’t generate much in the way of peripheral stats, but he should be a consistent source of points and threes while Gordon is out.

By Buck Davidson
This entry was posted on Saturday, January 29th, 2011 at 5:20 pm and is filed under BASKETBALL, Buck Davidson, The Wire Troll. You can follow any responses to this entry through the RSS 2.0 feed. You can skip to the end and leave a response. Pinging is currently not allowed.