The Wire Troll: Melo-Drama at the Deadline 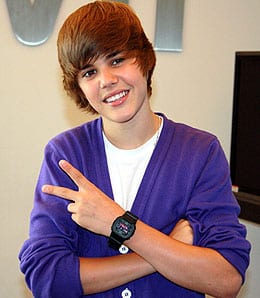 Somehow, the Celebrity game performance of Justin Bieber and his permanently affixed coif did not impress Buck.

Welcome to the Week 18 edition of the Wire Troll, our weekly look at players that may be available on your league waiver wire, but could see a spike in Fantasy value due to a variety of circumstances.

Well, the All-Star break is upon us, and the Troll has spent the last few days basking in what passes for “pageantry” at this event. Call me crazy, but watching Justin Bieber run the point in a play-game sprinkled with C-List rappers and pseudo-celebs is not my cup of tea. Seriously, if there’s to be a Kardashian involved, how many of us would want it to be the dude? The media gushed over Bieber’s “ankle breaking” form following the game, and while the Troll finds it noble that such a diminutive dynamo can play at a reasonably high level, he would encourage the paparazzi to get a load of this guy’s skills before throwing around too many superlatives. Beware the language in the music on this vid; that’s why they made volume controls, right?

Last week, the Troll paid homage to the Slam Dunk Contest by resetting Vince Carter’s incredible performance back in ’00, but this week we’ll take a look at the undercard event: the Three-Point Shootout. Rather than pay tribute to any of today’s long-range bombers, the Troll would like to take things really, really, old school… back to a time before the three-point shot was around in college hoops. A gangly youngster from a small steel town in Pennsylvania who could shoot and pass like none before was dazzling the basketball world in the relative anonymity of Louisiana State University. Over the course of his career, he averaged an incredible 44.2 points per game — a record which exceeds the second-best mark by an amazing 9.6 points — without the benefit of the three-point shot. How many points he would have piled up given the trey-ball no one knows, but it would not have been a stretch to imagine him dropping 50 per night. Injuries cut his NBA career short, but even today, when a hoops fan hears the word “pistol,” only one name comes to mind: Peter Press Maravich. His feats of daring-do revolutionized the game, and we felt it appropriate that we send some due Wire Troll love out to his memory. Rest in Peace, Pistol Pete. It’s been four decades, but we’re still digging your moves.

The NBA trade deadline hits this week, so be sure to follow the Wire Troll on Twitter for the early Fantasy spin on any breaking deals. As we go to cyber-press, the Carmelo Anthony deal/no deal is still shrouded in mystery, but we’ll Tweet our take just as soon as the news breaks.

Note: all stats include Thursday’s games.

Samuel Dalembert, Sacramento Kings: Dalembert was the prime beneficiary of DeMarcus Cousins’s brief stay in Chateau Bow-Wow, but the veteran big man has sustained a quality level of play even with the talented rookie now back to a full-time gig. Over the past six games, Sammy D has averaged 12.2 points and 9.5 rebounds, and while his block numbers have not been up to par during that stretch, he has averaged 1.6 swats per outing this season. Kings’ coach Paul Westphal (aka Nellie Nouveau) is notorious for his lineup tinkering, so keep a close eye on Dalembert’s minutes if you decide to add him to your roster. While he’s seeing solid run, Dalembert is a good source of boards and blocks, but he has never been much of a scoring threat.

Troy Murphy, New Jersey Nets (for now): As the trade deadline approaches, Murphy is very likely to be headed out of Joisey to Parts Unknown. What is known is that no matter where he lands, he’ll see an increase in Fantasy value — mainly because he’s as close to the bottom of the Fantasy barrel as one can get at this point. Murphy has not played since January 7, and never looked like a good fit with the Nets. Keep in mind that this is the same guy that averaged a double-double each of the past two season for Indy — and is one of the few big men that will consistently give you better than one three-pointer per night. He figures to end up with a contending club, and should produce decent numbers down the stretch — though he won’t approach his 2008-09 level. Murph makes a fine speculative add if you need boards or threes, but keep the bait knife handy in case he doesn’t land in a favourable environment. And yes, the Troll will give his take via Twitter whenever Murphy packs his bags.

Tony Allen, Memphis Grizzlies: Rudy Gay’s shoulder injury will sideline him for at least a month, and it’s possible that the Grizzlies’ star could miss the remainder of the season. While the injury all but ends Memphis’ playoff hopes, it opens the door wide for Allen, who looks like the prime candidate to step into Gay’s spot at the three. The veteran swingman has been playing well lately, averaging 16 points, three steals and 1.3 blocks over his last four outings. Allen won’t give you much from beyond the arc, but his knack for nicking (2.6 steals per game over the past five) should help ease a bit of the pain if you had Gay on your roster. Add Allen in all formats, and prepared to drop Gay in redraft leagues if he is indeed ruled out for the season.

Brandon Bass, Orlando Magic: Bass missed six games due to an ankle injury, and was summarily dropped by many Fantasy owners in favour of his replacement Ryan Anderson. Anderson has played well, but Bass regained his starting job Wednesday in what was just his second game back. He netted 15 points and yanked 11 boards that night, and threw in two steals and a blocked shot for good measure. Bass won’t give you much in the way of peripheral stats, and Anderson will still garner his share of floor time, but the veteran has shown time and again that he is a solid scorer and rebounder when he sees adequate playing time. Add Bass in deeper leagues, and keep an eye on how the rotation shakes out in the Land of the Mouse.

Luke Ridnour, Minnesota Timberwolves: Ridnour was only supposed to be keeping the point guard seat warm for Jonny Flynn, who underwent hip surgery back in July. Apparently Luke didn’t get that memo, as he has continued to flourish in the two months since Flynn made his return. Flynn may not be fully healthy yet, or may have re-injured himself, as the youngster was benched for Wednesday’s game, and is expected to miss the first two games after the break. Ridnour, meanwhile, missed six games due to a personal matter, but has looked solid since returning back on February 12. The veteran averaged 12.4 points, 6.2 dimes, 1.4 steals and 1.1 treys in January, and looks to have locked down the starting job again — especially in view of Flynn’s most recent injury. Ridnour doesn’t garner much notice, but unless your league awards points for media hype, it shouldn’t matter. He is only owned in about 53 per cent of Yahoo! leagues, but that number figures to increase now that Flynn is sidelined again.

Rodrigue Beaubois, Dallas Mavericks: Beaubois made his season debut Wednesday, firing in 13 points, dishing six dimes and racking up three steals. He was a surprise starter the following night, and looks to have established a firm role in the Mavs’ rotation. Beaubois’s high-energy game doesn’t lend itself to big minutes, but he can be a definite Fantasy contributor in the hustle stats… and the fact that he has averaged 11 points in his first two games is a good sign. Keep an eye out for any lingering issues with the foot injury that cost him the first 54 games of the season, but Beaubois makes a fine add in deeper Fantasy leagues.

By Buck Davidson
This entry was posted on Saturday, February 19th, 2011 at 10:05 pm and is filed under BASKETBALL, Buck Davidson, The Wire Troll. You can follow any responses to this entry through the RSS 2.0 feed. You can skip to the end and leave a response. Pinging is currently not allowed.