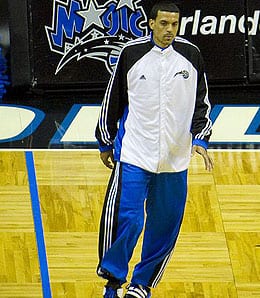 Well, they got here in very different manners, but the Orlando Magic and Atlanta Hawks will square off in the Eastern Conference semifinals starting Tuesday night.

Orlando made quick work of playoff newcomer Charlotte, disposing of the Bobcats in four straight games, while the Hawks had to work their asses off, coming back from a 3-2 series deficit to knock out the upset-minded Milwaukee Bucks in seven games.

There’s not much history to go by here, as this is just the second time these two teams have met in the playoffs. The first time was back in 1996, when the Magic won in five games, also in the Conference semis, for the right to go on to be bitch slapped by the Bulls.

Let’s see how these two teams stack up in the here and now.

Advantage: This is real close, but I have to give a slight edge to Atlanta because of its tremendous offensive rebounding that generates second chances. The wild cards here for the Magic are having Howard stop blogging about how bad the refs are (and getting slapped with fines because of it) and find out a way to stay on the court, and Carter, who is more capable of individually breaking a game open than any of the 10 starters. If either or both of those things happen, the edge swings back to Orlando.

Advantage: Orlando gets the edge here, as it has a much deeper and more-well rounded bench, but it does not have a game-breaker like Crawford, the Sixth Man of the Year, the kind of player who will be a factor in every single game.

This is pretty close, too. While Atlanta has more starters capable of producing big-time numbers, notwithstanding Crawford, it has no bench players really capable of supplying much offense. Orlando may not have as many weapons on the floor at any given time, but its depth is unmatched by the Hawks.

The Magic ranked fourth overall in points allowed, while Atlanta was also solid, tying for ninth.

While Atlanta is a better perimeter defensive team, it was middling in terms of overall opponents’ FG percentage, while the Magic was the best in the association. Neither team is strong at forcing turnovers, and while Atlanta was middle of the pack in steals, Orlando ranked near the bottom of the league.

In blocks, however, despite the presence of J-Smoov, the Hawks were only middle of the pack, while the Magic was fourth overall, thanks to Howard, who was down to 2.8 BPG this season, yet still led the NBA.

Advantage: Orlando, because of the top-ranked FG percentage against.

Advantage: Orlando, as long as Superman stays on the damn court, that is.

The Magic have way more playoff experience, both from last year’s run to the Finals and from players who had nice runs with other teams. Johnson has never experienced much playoff success, and while Bibby had some nice runs with Sacramento in his early years, Crawford had never played in a playoff game until this season. Evans and Joe Smith have had some experience, but neither were big factors in those runs, and neither is much of a factor now in Atlanta, especially Smith, who took DNP-CDs in three of the seven games against the Bucks.

As for the Magic, Howard, Lewis and Pietrus were all key players in last year’s run, as was Gortat, although his role was fairly limited compared to this year. Both Barnes and Pietrus played big roles on the Golden State team that upset Dallas a few years ago and Carter had some nice runs in Toronto and New Jersey. Nelson missed most of last year’s postseason with injuries, but has still racked up 23 games of playoff experience now. But the most experienced player on either team – and the only one with the ring to flash – is Jason Williams, who had some run with Sacramento and Memphis, but earned his championship stripes as the starting point guard on Miami’s 2005-06 team.

Advantage: Orlando, as the Hawks are generally still a bit green.

While the Hawks have some amazing weapons in Johnson, J-Smoov and Crawford, any injuries or foul trouble will be almost impossible to overcome.

By RotoRob
This entry was posted on Monday, May 3rd, 2010 at 12:57 pm and is filed under BASKETBALL, RotoRob. You can follow any responses to this entry through the RSS 2.0 feed. You can leave a response, or trackback from your own site.