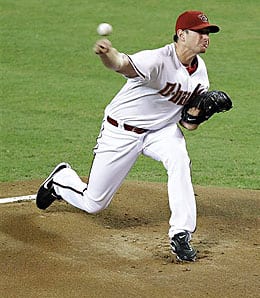 Daniel Hudson won 16 games, but it was his batwork that earned him hardware.

On Friday, we reviewed this year’s American League Silver Sluggers, and today we’ll take a look at the NL winners. Once again, let us know if you agree with the picks or not.

Prince Fielder, Milwaukee Brewers: Fielder bagged his second silver stick, and now we’re left to wonder if it will be his last as a member of the Brewers. Now that the exclusive negotiating period is over, the chances of Fielder returning to Milwaukee have diminished. He enjoyed a much better year at the plate and was extremely productive, but I believe Albert Pujols and Joey Votto were slightly more deserving of this honour.

Brandon Phillips, Cincinnati Reds: As we discussed in our Reds’ season recap, Phillips’ Fantasy value is slipping, but his first .300 season was good enough to help him take home his first Silver Slugger. He deserved the award, but it’s ironic that it came in a season that wasn’t really close to his best effort. Phillips’ award, however, had more to do with the paucity of talent at this position in the NL. The keystone corner is a bit of a black hole in the senior circuit these days, especially when you consider the AL boasts Robinson Cano, Dustin Pedroia, Ian Kinsler, Michael Young (he qualified there this season), Ben Zobrist and Howie Kendrick.

Troy Tulowitzki, Colorado Rockies: Tulowitzki earned his second honour after reaching 30 dingers for the second time and topping the century mark in RBI for the first time. It was another big year, but not quite as dynamic as last year. If Jose Reyes hadn’t missed 36 games, this award should have been his.

Aramis Ramirez, Chicago Cubs: Given the number of big seasons he’s had, it’s a little surprising that this was the first Silver Slugger for A-Ram. As we discussed in early August, his comeback effort was one of the few bright spots for the Cubs this season. Ramirez reached 80 runs for the fifth time, and while his power waned for a third straight season, his BA bounced back in a big way. In a season that lacked a lot of big performances from NL third basemen, Ramirez definitely deserved this, and it came just in time for him to hit the free agent market. Could he be plying his trade with five-time defending NL East Champion Philadelphia next season? The Dodgers – if they have the money – could be interested, and he’d be a perfect fit there.

Ryan Braun, Milwaukee Brewers: Braun has now played four full seasons in the bigs and owns four Silver Sluggers. After putting up his first 30-30 season, this award was a slam dunk.

Matt Kemp, Los Angeles Dodgers: This was the easiest call of all, as Kemp was not only the top outfielder this year, but he was the best player in the game, period. In earning his second Silver Slugger, he set career highs across the board and narrowly missed out on joining the super exclusive 40-40 club. Hell, he had a legitimate shot at the Triple Crown for most of the season, falling just 13 points in BA shy of achieving that rarity. Would the Dodgers have finished over .500 without him? Would they have even won 70 games? Seriously, this dude was crazy good, finally enjoying that major breakthrough we’ve all been waiting on.

Justin Upton, Arizona Diamondbacks: After a disappointing season in 2010, Upton bounced back big time this year to earn his debut Slugger. We might have taken Michael Bourn for this last NL spot, however, it’s damn close, and it’s hard to quibble with Upton’s across the board production.

Brian McCann, Atlanta Braves: McCann pretty much owns this award in the NL, taking home his forth straight Silver Slugger, and his fifth in six years. His OPS dropped for a third straight year and while his BA inched up this year, I think you can make an argument that Miguel Montero or even Yadier Molina could have wrestled this award from McCann.

Daniel Hudson, Arizona Diamondbacks: Hudson not only enjoyed a breakthrough by winning 16 games, but he smoked his first career homer and drove in 14 runs in 65 at-bats, an excellent rate by anyone’s standards, never mind for a pitcher. He had exactly one career run before this season, but scored five times in 2011 and wound up with twice as many extra-base hits as he had accumulated up until this year. This was Hudson’s first Silver Slugger.

By RotoRob
Tags: National League
This entry was posted on Saturday, November 5th, 2011 at 2:56 pm and is filed under BASEBALL, RotoRob. You can follow any responses to this entry through the RSS 2.0 feed. Both comments and pings are currently closed.