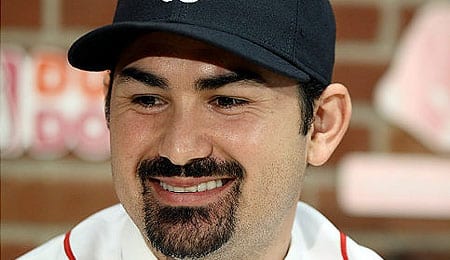 It’s debatable whether Adrian Gonzalez deserved the AL Silver Slugger at first base.

With the World Series in the rear view mirror, we’re now heavily into the MLB awards season, and earlier this week the AL and NL Silver Sluggers were announced. Here’s a quick rundown of the winners in the American League and our take. Any thoughts on undeserving winners or players who were shunned that should have won? Feel free to let us know in the comments below. While you’re at it, take a peek at RotoRob TV when you get a chance. It’s located at the very top of the site.

Adrian Gonzalez, Boston Red Sox: Gonzalez took home his first Silver Slugger after a monster first year in Boston, arguably his finest season yet. His extra-base pop dwindled slightly but he finished second in the junior circuit in hitting. We’re projecting AGon as a borderline first round pick next season, but are not sure he deserved this honour. It was damn close, but we’d have selected Miguel Cabrera.

Robinson Cano, New York Yankees: Cano had another strong season in taking home his third Silver Slugger, and this was another close call, but we’d have taken Dustin Pedroia and his power/speed/BA combo here.

Asdrubal Cabrera, Cleveland Indians: Cabrera busted his Silver Slugger cherry with a coming out party in 2011. The dude had 18 homers in his first four seasons and suddenly spanked 25 this season. Yikes. This award was definitely deserved.

Adrian Beltre, Texas Rangers: Beltre bagged his third Slugger, and while he was definitely the man at the hot corner as far as players that spent the whole season there goes, two players that also qualified there deserved recognition: Jose Bautista and Beltre’s teammate Michael Young. Bautista did take one of the three outfield slots, so that’s fine, but Young should have won something. Still, despite missing almost 40 games, Beltre had an extremely productive season and he was an absolute beast down the stretch, spanking a dozen homers and driving in 29 runs while batting .374 in September. Woah.

Jose Bautista, Toronto Blue Jays: This is the second Silver Slugger for Bautista and another easy choice. He missed some time, but if possible was even better than he was in 2010, scoring a crapload of runs and further developing at the plate. He’s also become a real leader in the Toronto clubhouse.

Jacoby Ellsbury, Boston Red Sox: Ellsbury bagged his first Slugger and it was well deserved after he enjoyed a major power breakthrough and drove in 105 runs – as a leadoff hitter. Okay, so he wasn’t at his sharpest on the basepaths, but this Red Sox homegrown talent established himself as a first round pick in next year’s Fantasy drafts after this effort.

Alex Avila, Detroit Tigers: Avila is a another first-timer for this honour, and his breakthrough earned him a spot on our mid-season All Wire Troll team. After batting under .230 last year, he soared to .295 this season — with power. Two players that technically qualified here – Victor Martinez and Mike Napoli – were likely more deserving, but Avila was the top full-time catcher in the AL by far.

David Ortiz, Boston Red Sox: Big Papi is the now the owner of five Silver Slugger Awards after putting up his best overall season since 2007. His extra-base pop slipped a bit, but he made up for it with a big rebound in BA and should garner good attention as a free agent this winter.

By RotoRob
This entry was posted on Friday, November 4th, 2011 at 6:13 pm and is filed under BASEBALL, RotoRob. You can follow any responses to this entry through the RSS 2.0 feed. You can leave a response, or trackback from your own site.