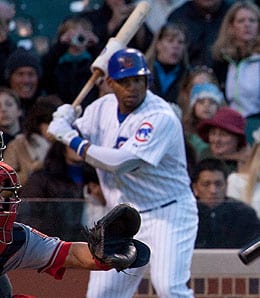 Marlon Byrd could be a decent addition to your Fantasy team.

How sad is this? The Cubs are rolling right now, winning six straight games, yet they’ve only pulled within 6.5 games of the Reds, who are in fourth place in the NL Central. Pathetic.

Let’s start of with some of the good news. Aramis Ramirez has enjoyed a solid comeback effort after his sub par 2010, likely ranking among the top five third basemen in the game again, outstripping our projection that he’d only be a top 10 player at his position.

After hitting a measly two homers in the first two months of the season, A-Ram exploded, smacking a combined 17 in June and July. He’s off to a sluggish start in August with just one homer and a BA that continues to slide, but he’s already reached 20 homers for the ninth time, something we weren’t sure he’d be capable of given his health woes in recent years. Ramirez has also spent lots of time in the three-hole lately, a slot he only occupied once last year.

What’s really impressed me about Ramirez this year is his massively decreased strikeout rate. That’s helped him jack his BA back to career norm levels after a woeful showing last season.

So massively hyped as a minor leaguer, A-Ram really struggled in his early days before breaking through in 2001. Now 33, he’s likely to reach 1,100 career RBI some time next week. Better yet, his eight-year run in Chicago has finally ended the suffering of the team’s fans who had been waiting for a legitimate answer at the hot corner for years and years.

We hope you took our advice about a month ago and grabbed outfielder Marlon Byrd when he came off the DL. While he wasn’t quite as blazing as he was before he got hurt, Byrd still managed to slash an impressive 30 hits in July, adding a sprinkling of walks and quite a few extra-base hits.

He’s been a bit inconsistent in the early going in August, getting a seat on the pine Friday, but he’s back in the lineup Saturday and remains a widely available Fantasy outfielder, worthy of your consideration in NL-only leagues and deeper mixed leagues.

Byrd spent the first part of the year as the Cubs’ No. 3 hitter, but his lack of productivity in that slot has seen him bumped down to mostly fifth since his return from the DL.

By RotoRob
This entry was posted on Saturday, August 6th, 2011 at 1:14 pm and is filed under BASEBALL, RotoRob, Team report. You can follow any responses to this entry through the RSS 2.0 feed. You can skip to the end and leave a response. Pinging is currently not allowed.