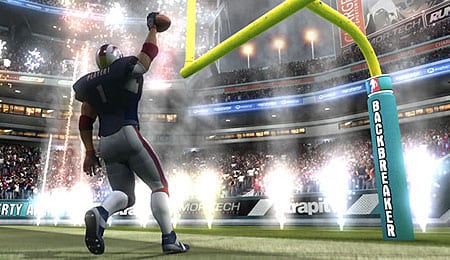 It may look like football, but in reality… meh, not so much.

Your player controls the same whether you’re on offense or defense with a number of evasive moves to bypass would-be tacklers (or blockers). You can slide (Y), hurdle (A) and lower your shoulder (X) along with jukes and spins mapped to the right analog stick. Sprinting is done with either trigger and you can showboat with the bumpers. There is one defense-only move: a dive (B) to drag down the ball carrier.

It all handles fairly smoothly, but as you advance, the courses become more maze-like with little room to maneuver (step out of bounds and fail the challenge). It’s here that the lack of precision in controlling your player becomes evident. Most notably, you’re unable to come to a complete stop, which forces you to round off corners and makes it unnecessarily difficult to navigate through tight spaces.

Player models in Backbreaker: Vengeance look really good, and the Euphoria engine animates them to perfection. Watching players stumble realistically after indirect contact or go head over heels from a nasty shot to the lower extremities is fantastic. There’s not much variety in the stadiums (at least not once you’re at field level) and the crowd looks shaky, but they’re small gripes given how good the actual players look.

There’s not much going on with the audio outside of some generic music that plays during menu screens and replays. Grunts and collision sound effects hold up well, though.

There are three modes to choose from in Backbreaker: Vengeance — Tackle Alley, Vengeance and Supremacy. In Tackle Alley, you control a ball carrier that must avoid defensive players and traverse obstacles (like hurdles, out of bounds zones and tackling dummies) to reach the end zone. In Vengeance, you’re on the defensive, but it’s otherwise pretty much the same as you evade blockers to tackle your opponent before he scores. Supremacy is something of a mixture of the two where you battle three other A.I. competitors to tally the most points.

Each tackler/blocker you encounter will be colour coded, which lets you know what move(s) will be effective in passing them. Those with a yellow aura can be avoided by sliding, blue ones can be plowed over by dipping your shoulder and red are susceptible to hurdling. Jukes and spins work against all of them, but they reward you with fewer points. Early on it’s pretty straightforward, allowing you to exploit your opponents’ weaknesses, though in later levels you’ll routinely have to outmaneuver more than one simultaneously, which gets challenging in a hurry.

However, while the core gameplay is fairly enjoyable, there are three significant issues that really hurt the title’s value. The first, which was already touched on earlier, is the controls. The ability to stop and make precision cuts is needed to properly navigate the more elaborate obstacle courses. Since it doesn’t exist, you’ll often find yourself going out of bounds when trying to avoid tacklers in narrow spaces. It’s unnecessarily frustrating and devolves later challenges into executing moves repeatedly and hoping that you don’t accidentally touch a boundary marker.

There’s also an issue with the game’s understanding of the rules of pro football, specifically related to what does and does not constitute a touchdown. Basically, once you’ve passed a tackler they will begin to chase you. This makes showboating a lucrative (it builds up points) but risky proposition. What’s frustrating about this is that if the computer starts a tackle in the field of play you fail, even if you clearly cross the goal line before going down. It’s an oversight, and one that is not reciprocated when you’re the defensive player.

Ultimately, though, the biggest issue with Backbreaker: Vengeance is the price tag. At 1,200 MS Points (US$15), you’re automatically inviting comparisons between what is a collection of three mini games and full-fledged titles like Castle Crashers, DeathSpank, Torchlight, Shadow Complex and a dozen other games that offer much more content at that price point.

Online multiplier is a solid idea conceptually. In practice it’s completely hit or miss. I played games where things controlled smoothly with no noticeable lag, and then I played others where the slightest touch sent my player veering drastically in another direction. My advice: if you’re in a game where the controls are overly sensitive quit out and try again as it becomes essentially unplayable. When you’re in a responsive game going head-to-head with another human player, though, it’s fun.

Despite some warts, I largely enjoyed my time with Backbreaker: Vengeance. That being said, I can’t simply gloss over the 1,200-point asking price. It’s too high. Unless you’re jonesing for a football-themed title put Backbreaker on the back burner until it hits Deal of the Week status — at which point it would make a solid addition.

By Herija Green
This entry was posted on Tuesday, July 5th, 2011 at 4:30 pm and is filed under FOOTBALL, Herija Green, Video Game Reviews. You can follow any responses to this entry through the RSS 2.0 feed. You can leave a response, or trackback from your own site.