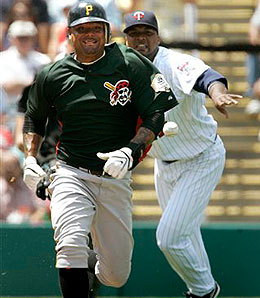 Jack Wilson, coming off one of his most productive seasons, is hurt again.

A strained calf has landed the Buc’ shortstop on the 15-day DL, the third straight season he’ll miss action.

Despite missing about a month of action, he set personal bests in both homers and OBP last year, but was off to a slow start this season (1-for-12) before getting hurt Thursday. His DL stint was made retroactive to Friday, meaning he’ll be eligible to return on April 19.

In his stead, Luis Rivas, who hasn’t been valuable in quite a long time (okay, he’s never been valuable), could be worth a look. He’s been hitting up a storm, going 2-for-4 with two runs and an RBI through the seventh inning of Monday’s home opener for the Pirates to raise his BA to .350.

As a result, look for Brian Bixler to get his chance by Wednesday. Called up from Triple-A to replace Wilson, Bixler is known for his defensive prowess at short, although he didn’t hit poorly at Triple-A last season (.274, five homers, 51 RBI) while showing great speed.

Bixler said he’d be okay backing up Freddy Sanchez at second base as well, but Pittsburgh only plans to employ Bixler at short.

So for the next two weeks, I’d suggest taking a look at Rivas as a decent short-term pickup, especially in NL-only leagues, but do note that if he continues to butcher things defensively, the Pirates will likely give Bixler more action at short.

By RotoRob
This entry was posted on Monday, April 7th, 2008 at 4:54 pm and is filed under BASEBALL, Injuries, RotoRob. You can follow any responses to this entry through the RSS 2.0 feed. You can leave a response, or trackback from your own site.