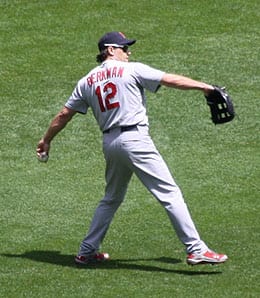 How is Lance Berkman not in the Home Run Derby?

Heading into the season, we declared Robinson Cano the new King of Second Basemen and he’s done nothing to dissuade us from that assertion, proving that he is easily the most valuable Fantasy player at the keystone corner.

He singled and scored Wednesday, running his current hitting streak to 10 games. Okay, he hasn’t exactly been white hot (just three multi-hit efforts in this stretch), but he does have five doubles, two triples, 11 runs and six RBI. Not too shabby.

Other than a somewhat sluggish May, Cano has been playing at an extremely high level all season long, and he’s on pace for a career best with 105 runs and the same amount of RBI, which would threaten last year’s career-best 109 ribbies.

Cano is striking out a bit more often, and that’s likely hurt his BA somewhat, but it didn’t stop AL Home Run Derby captain David Ortiz from picking him to participate in the event.

Matt Holliday owners have to be pretty pleased with the way this season has gone, notwithstanding some injury issues. Remember that we expected him to miss most of April after his appendectomy, but he only wound up missing a week and when he came back, he raked like nobody’s business (.389 with 14 RBI). Then came the nagging quad injury that forced him out of the lineup for a couple of days in late May and ultimately drove him onto the DL.

Since his return from that injury in mid-June, Holliday has kept mashing. On Wednesday, he put together his second straight multi-hit game, a stretch which has included three homers and five RBI. He’s now on pace for 24 homers and considering how much time he’s missed, Holliday has been extremely productive for the first-place Cardinals.

There’s been a lot of outcry that lone D-Back All-Star Justin Upton wasn’t also picked for the Home Run Derby, a move that would have made sense given that the game is in Arizona. Heading into the season, we saw Upton as a top 15 outfielder, but he’s easily surpassed that and performed as a top 10 flyhawk.

Upton, shockingly still just 23, was a big disappointment last year after his major breakthrough in 2009, but he’s bounced back in a huge way in the first half of this season, upping his BA despite a reduced walk rate.

Another notable absence from the Home Run Derby lineup is Lance Berkman, the NL’s leader with 23 dingers. Berkman, whose quick start we discussed in an early May Podcast, was hitless Wednesday, but had bashed five homers in the previous six games.

He only hit .221 in June, but his owners weren’t moaning too much considering he stroked nine big flies and drove in 22 runs. Berkman had a nightmare 2010 season split between the Astros and Yanks, but he’s come alive in his return to the Senior Circuit, setting himself up as the leading candidate to be the NL’s Comeback Player of the Year. Despite his recent BA woes, he’s back to being a .300 threat and his walk rate has bounced back.

With Albert Pujols returning Wednesday, Berkman has moved back to right field, which poses an interesting playing time issue given Jon Jay’s fine season. You can’t take Berkman’s bat out of the lineup, so the player that could suffer the most here is Colby Rasmus as Jay could start eating into the centre fielder’s playing time. It’s a situation that should be watched closely over the next few weeks.

By RotoRob
This entry was posted on Thursday, July 7th, 2011 at 12:24 pm and is filed under BASEBALL, MLB Today, RotoRob. You can follow any responses to this entry through the RSS 2.0 feed. You can leave a response, or trackback from your own site.