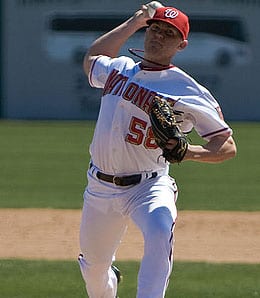 Jeez Louise, it was just over a month ago that we were talking about Justin Verlander’s second career no-hitter and on Tuesday night, he came within a few outs of his third, taking a no-hitter into the eighth against the Indians before Orlando Cabrera broke it up with a clean one-out single.

Verlander had to settle for a two-hitter (what a stiff, huh?), but he racked up a season-best 12 Ks in winning his sixth straight.

Only five pitchers in major league history have thrown three or more no-hitters in their career, but the way things are going for Verlander right now, he’s a threat to do so every time he takes the mound, so it wouldn’t be a surprise at all if he joined that exclusive group in the very near future.

The Tigers are rolling now, having taken over sole possession of first place in the AL Central with their MLB-leading ninth shutout of the season, two of which have been authored by Verlander.

Six weeks ago, we were marvelling that the Indians were in first place despite some key injuries and some crappy play by a couple of their bigger bats, including Shin-Soo Choo. Well, Choo still hasn’t shaken off his doldrums. He took an 0-for-3 Tuesday, getting robbed of a home run in the second inning by Austin Jackson, and Choo has now gone over three weeks since his last multi-hit game. Yikes.

We’re over a third of the way through the season and he is bearing no resemblance to the hitter who has consistently put up solid numbers over the past three years.

The Indians have now dropped 16 of their past 20 and an offensive offense is the main culprit. Choo’s inability to be a productive hitter is a big part of that, and if Cleveland is going to hang around in this race, it will need him – and a couple of other hitters – to drive in runs at a much higher clip. Choo has just eight RBI since April 28. Really?! It wouldn’t shock me at all to see Choo start showing up on the wire of more shallow leagues if this continues.

The Nationals matched a season-best by exploding for six runs in the seventh inning for a huge comeback win over the Cardinals Tuesday.

Drew Storen pitched around a couple of walks, including an intentional pass of Albert Pujols, to nail things down for his 16th save in 17 tries. Storen has now racked up six straight scoreless outings, and while he’s battled some command issues this month, he’s been basically unhittable.

Given the struggles this year from the likes of Joakim Soria, Brian Wilson (early on, anyways), Jonathan Papelbon, Francisco Rodriguez and Carlos Marmol, it’s time to go ahead and say it: Storen is the best closer in baseball at this very moment.

It’s hard to believe that at the very beginning of the season, Storen wasn’t the clear-cut closer for the Nats, because right now he has a death grip on the job and has bought himself a ton of leeway should any struggles crop up.

This kid is growing by leaps and bounds before our eyes and has started to develop that short-term memory loss that is vital for success in this position. Washington’s first round pick from 2009 has arrived as a stud closer and those of you that plucked him this spring should sit back and enjoy the ride.

By RotoRob
This entry was posted on Wednesday, June 15th, 2011 at 10:51 am and is filed under BASEBALL, MLB Today, RotoRob. You can follow any responses to this entry through the RSS 2.0 feed. You can leave a response, or trackback from your own site.