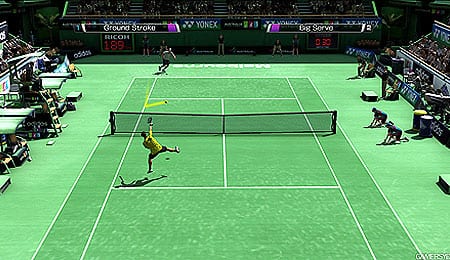 It may look like traditional tennis, but VT4 has a very arcadey feel.

Just a short while ago, Top Spin 4 set a new standard for tennis games. Now its rival comes swinging back with Sega’s release of Virtua Tennis 4. Is this a heavyweight match-up of epic proportions, like Andre Agassi and Pete Sampras squaring off at the peak of their careers? Or is it a lopsided battle, like Rafael Nadal’s French Open dominance over Roger Federer? Let’s find out.

Virtua Tennis 4’s controls essentially break down into the four face buttons, one for each type of shot. There’s an element of timing that affects the power of each shot. Once you press one of the buttons for your shot, the standard use of the left analog helps with ball placement. During practice sessions, graphical representations of both power and placement appear; however, once you’re playing — even against robotic walls — you’re on your own. There are no modifiers, button or otherwise, that give you more precise control over shots. Because of this, Virtua Tennis 4 feels more like an arcade experience compared to Top Spin 4 with its sim-like controls.

Movement was the one fatal flaw of Top Spin 4. That game’s movement controls felt overly animated, resulting in some sluggish or late movement. This problem doesn’t exist in Virtua Tennis 4. The analog stick gets your player where you want to go (when he/she isn’t injured) in relatively crisp movements without the delay/sluggish movements that sometimes bogged down running across the court in Top Spin 4.

For more on Playstation Move and Microsoft Kinect experiences, see below. Those did not factor into the score.

When your career mode gets into the upper echelon (or you simply jump into exhibitions with star players), you’ll instantly recognize players like Federer and Serena Williams. Sega has done a good job capturing the details for near-likenesses of pro players. It has also replicated their post-point mannerisms, such as Maria Sharapova’s fist-pump/talking-to-herself after good points. These are nice touches that every fan will appreciate. For players that weren’t paid an exorbitant license fee (user-created or computer-generated), the character models aren’t as refined but they’re still effective for a current-gen sports game.

The game’s developers did go a little overboard with the sweat engine. In some cases, it could just be the second point of the game and the players appear drenched with sweat to the point where they almost look like melting wax statues. Also, hair appears to be last-gen, particularly on female players, as ponytails sometimes stick out in weird geometric shapes and angles.

Note that unlike what 2K did with Top Spin 4, Sega didn’t license the Grand Slam tournaments, so there are no authentic venues here. It’s obvious which ones are supposed to be represented, but they wind up having a detailed-but-generic feel.

Some people (like myself) prefer sports games to feel as sim-based as possible. That means no random music playing throughout matches or games. Virtua Tennis 4 was seemingly designed with the more casual arcade-style experience in mind, and as such, you’ll get random techno music playing throughout your match. Outside of the music, the sounds are fairly standard — grunts, balls hitting rackets, shoes slipping through clay. The recorded grunts are all over the map, with some of the recordings sounding like the voice actors tried way, way, way too hard. You’ll know what I’m talking about when you hear it.

In terms of pure gameplay, Virtua Tennis 4 doesn’t feel like it’s advanced far past the previous iterations of tennis games. The tried-and-true model of “four face buttons with analog stick” keeps the game feeling familiar. That really limits the viability of Virtua Tennis 4 because you’ll wind up feeling like you’ve played this before — it just looks better. For some gamers, that’s fine; for others, that’s simply not enough, especially with Top Spin 4’s advanced and nuanced controls.

You can get to the matches in the standard ways you’d expect from sports games: career mode, tournament, exhibition, practice, and online play. Career mode has the most replay value while instant-matches and tournaments can be played either with created characters or real-world players. Career mode has the most depth, as your player’s movement is based on a world map with events (tournaments, practice games, challenges, publicity events). To get to each event, you’ll have to cash in a movement ticket to land exactly on it, similar to a board game with dice. Your player’s condition is affected by the cumulative amount of things you do, though it can be restored by staying at hotels. This is important because poor conditioning can directly affect your matches with injuries.

There’s nothing groundbreaking about Virtua Tennis 4 outside of its Playstation Move functionality. In a lot of ways, it’s simply the previous generation’s tennis games updated with better graphics and online play. Unless you have an urge to experience a tennis game with your motion controller (see below), you’ll have to debate the value of picking up Virtua Tennis 4. It’s an arcade-style experience without the depth or nuanced controls of Top Spin 4. On its own, it does what it does reasonably well but viewed side-by-side with Top Spin 4, it’s clear that Virtua Tennis 4 lacks the substance of a champion.

Playstation Move owners have most likely spent time with Sports Champions, so they probably first experienced the Move’s racket-sport accuracy with that game’s table tennis. Virtua Tennis 4 takes this to the next level with a semi-first person perspective and a silhouetted racket that tracks your every move. For the most part, the physics respond accordingly in terms of spin, power, and timing (with a significant amount of computer assistance). Movement is computer controlled, and as you play on harder levels, greater swing accuracy is necessary to make contact with the ball.

As a lifelong tennis player, I found the Move controls were the proper balance of game and real-life, where you can get a good workout while playing in a virtual environment. Pre-release hype focused on the accuracy of the Move controls, and I’d peg it at about 75 per cent accurate in terms of what I wanted to do with spin and placement. Unlike Wii Tennis or Top Spin 4, this isn’t waggle controlled but true motion. It’s a unique experience and the cusp of what’s possible with motion gaming. Despite my rather indifferent review above, if you enjoy playing real-life tennis and have a Playstation Move, Virtua Tennis 4 is something you should check out. Unfortunately, this only works in exhibition matches. Considering the pre-release hype of the Move functionality, it’s strange that you can’t actually handle career mode with motion control. This is a pretty major oversight, and one that Sega hopefully corrects with a software update.

As with Top Spin 4, I had the opportunity to test out the Xbox 360 version of Virtua Tennis 4 while Mike explored all the PlayStation 3 goodness the title had to offer. The game looks good and runs smoothly on the 360 — player likenesses are easily recognizable and the animations are crisp. In terms of standard controls, Virtua Tennis 4 offers a much more arcade-like feel when compared to the precision depth of Top Spin 4.

Of course, the biggest difference between the Xbox 360 and PS3 versions is the game’s support for the consoles’ major peripherals. While Mike got to experiment with the Move, I finally got to try out my Kinect on something that wasn’t developed specifically for it.

The first thing you’ll notice with Virtua Tennis 4 and the Kinect is that the game only supports exhibition matches. There are a handful of options to select from, including whether you’re right- or left-handed. Once chosen, the Kinect appears to only recognize movements made with your dominant hand so you’re free to do whatever you want with your off hand. Playing with the Kinect also changes VT4 into a first-person, on-rails tennis game with the computer controlling all your movement.

Virtua Tennis 4 does a pretty good job of reading your motions, but I didn’t feel like it recognized the way I was manipulating my arm to simulate things like top spin or slice. I also struggled to consistently place the ball where I wanted with most of my shots ending up cross court.

Overall, playing VT4 with the Kinect felt a lot like playing Wii Tennis with the Wiimote: responsive to a point but devoid of any tangible depth. The game itself is quite fun, but the Kinect functionality is probably something you’ll utilize a handful of times until the novelty wears off.

By Mike Chen
This entry was posted on Thursday, June 16th, 2011 at 9:15 am and is filed under Herija Green, Mike Chen, Video Game Reviews. You can follow any responses to this entry through the RSS 2.0 feed. Responses are currently closed, but you can trackback from your own site.