The Wire Troll: Dee Gordon Leads the Next Wave of Prospects 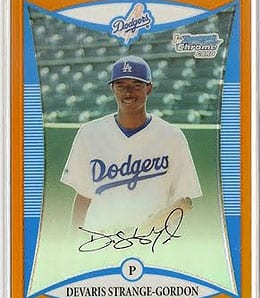 Flash’s kid Dee Gordon has arrived in The Show.

Tim has again fallen and can’t get up, leaving the Wire Troll to your trusty editor. The big trend this week is that now that we’re midway through June, teams are starting to bring up some of their bigger prospects, so the sharp Fantasy owner will stay on top of this and be ready to pounce when appropriate.

Let’s get it going…

Dee Gordon, SS, Los Angeles Dodgers: Our No. 46 prospect heading into the season, Gordon, the son of long-time MLB hurler Tom was brought up to the majors last week. And just like the nickname of his namesake, Dee brings some Flash to the game with his electrifying play, something the Dodgers desperately need on offense. With perennially hurt Rafael Furcal out for as much as another month, Gordon (full name — Devaris Strange-Gordon) needs to be owned in all NL-only leagues, and given how he’s performed so far –- three multi-hit efforts in five starts with four runs and two steals –- deeper mixed league owners should also find a place for the youngster. Gordon is being lauded for his glovework and his work at the plate, so based on the early returns, it’s clear this 23-year-old has a very bright future indeed.

Jemile Weeks, 2B, Oakland Athletics: In another case of a promotion with good bloodlines, Rickie Weeks’ younger brother arrived in the Bay area last week. The 12th overall pick in the 2008 draft, Weeks was called up to replace the injured Mark Ellis, and –- much like Gordon with the Dodgers -– he injects some excitement into a moribund A’s attack. The former U of Miami standout has gotten off to a blazing start in Oakland, going 6-for-17 with three runs, a double, two triples, an RBI and a walk in his first five games. Weeks had a decent season at Double-A last year, but he took off in the AFL and has continued that tear with a major breakout year at Triple-A, batting .321 with 30 runs, 10 steals and a fantastic batting eye through 45 games. Grab him while you can in AL-only leagues, as Weeks may very well steal Ellis’ job for good.

Anthony Rizzo, 1B, San Diego Padres: A week ago, we mentioned that Rizzo was one of a few big-time prospects that was just around the corner; well, a couple of days later, the Padres finally tired of watching him make a mockery of Triple-A (.365 with 16 homers and 63 RBI in 52 games) and brought him up, their first return at the major league level of the package they received in the Adrian Gonzalez trade (notwithstanding fringe major leaguer Eric Patterson, a throw-in in the deal). Rizzo tripled and walked twice in his debut, drew another pair of walks in his second game, and then spanked his first dinger and doubled on Saturday in just his third big league game. This dude is flying off the wire, so you better move quickly if you want to get in on the ground floor here.

Mike Moustakas, 3B, Kansas City Royals: Another player whose promotion we predicted last week, Moustakas was called up Thursday, and paid immediate dividends with a hit, a walk and a run in his debut Friday and then a homer and another walk on Saturday. These kids sure come major league-ready, don’t they? The Royals’ abundance of minor league talent is finally starting to make its presence felt at Kauffman Stadium, and Moustakas has immediately become a must-own asset in all formats.

Scott Sizemore, 2B, Oakland Athletics: What’s this? We’re recommending two A’s in one week? I know, it’s crazy! But Kevin Kouzmanoff has been sent down to Triple-A, leaving Sizemore to man the hot corner in Oakland, and he’s off to a great start, with five hits and three RBI in his first three games before taking an 0-for-4 Saturday. Recently dealt to the A’s by Detroit, Sizemore showed what he’s capable of on Friday with three hits and his first three RBI in a month. However, consistency has never been his thang, so temper your expectations.

Cord Phelps, 2B, Cleveland Indians: Phelps has been promoted to share the second base job with Orlando Cabrera, who is none too pleased with this development.

Edinson Volquez, SP, Cincinnati Reds: Volzquez is back from the minors, and in his first start he actually managed to avoid getting pounded in the early innings, lasting seven strong frames for his first win for Cincy in over a month.

John Danks, SP, Chicago White Sox: We were shocked by how many gave up on the White Sox ace, but he finally bagged himself a win Monday and then followed it up with another victory Saturday. He will not last long on the wire, folks.

Greg Halman, OF, Seattle Mariners: The Mariners have called up Halman, and while PT may be an issue, Seattle is committed to seeing what its kids can do, so take a chance on him in AL-only leagues.

Mike Carp, DH, Seattle Mariners: The Mariners also want to have a look at Carp, but his best case scenario is a time-share, so he’s an asset only in deeper AL-only formats.

Rex Brothers, RP, Colorado Rockies: The reliever with the name that sounds like a one-man circus, or perhaps his own country band, sure knows how to mow ‘em down, racking up 45 strikeouts in just 28 IP at Triple-A. Brothers is considered a closer-of-the-future type, so the Rox won’t be shy about throwing him into important situations, meaning he’ll have value in leagues that track holds.

Chris Sale, RP, Chicago White Sox; Sergio Santos is getting smacked around something fierce lately. Jesse Crain earned the save Saturday, but will young lefty Sale get his chance to close out games in the Windy City?

Lucas Duda, OF, New York Mets: Duda’s starting to get some real PT and the Mets even gave him his first career start at first base Saturday as they clearly are trying to find ways to get his stick in the lineup. There’s major power potential here and the Mets need pop with Ike Davis out and Jason Bay still swinging a limp twig.

Javy Guerra, RP, Los Angeles Dodgers: Someone will be saving games in Dodgertown, right? So why not Guerra? Still, he’s looked quite shaky recently, so this is a wild card.

Mitchell Boggs, RP, St. Louis Cardinals; The Cards sent down Boggs to stretch him out as a starter, and have now recalled him. We liked Boggs as a closer, but St. Louis hasn’t given up the idea that he could be a starter.

Will Venable, OF, San Diego Padres: Venable rediscovered his batting stroke at Triple-A (.276 with 14 runs and 11 RBI in 14 games), prompting the Padres to bring him back to San Diego last week. Venable made an immediate impact when he first arrived in the Show in 2008, and showed progress the following year, but has stunk it up since. Let’s see if some Triple-A time will wake him up.

Steve Cishek, RP, Florida Marlins: Leo Nunez (back) is out for a couple of days and Cishek bagged the save Friday. If you’re trolling for a save chance over the next couple of days, Cishek could be a sneaky play.

By RotoRob
This entry was posted on Sunday, June 12th, 2011 at 12:53 pm and is filed under BASEBALL, RotoRob, The Wire Troll, Tim McLeod. You can follow any responses to this entry through the RSS 2.0 feed. You can skip to the end and leave a response. Pinging is currently not allowed.