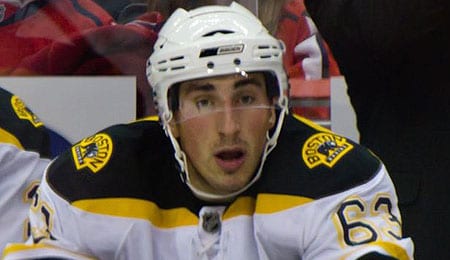 Brad Marchand wanted to drop the gloves at the end of Game Four.

On Saturday, I was asked to guest on the Alex Reimer Show on 1120 WBNW Boston to –unbelievably — talk about something besides the National League Central. Nope, it’s Stanley Cup Finals time, so Alex and I wrapped about the series, going over among other things:

In his original e-mail, Alex mentioned that he was going to ask me about the differences between American and Canadian sports fan and, oh man, did I have some choice words to offer, but much to my chagrin, we never broached the topic. Maybe next time…

You can hear the interview in its entirety by clicking the play button below. Note that my portion comes on around the 46-minute mark, and if you’re listening to the whole show, there’s about five minutes of commercials right at the top that you’ll need to wade through.
[podcast]https://rotorob.com/podcasts/Hockey_Podcast_June1111.mp3[/podcast]

By RotoRob
This entry was posted on Monday, June 13th, 2011 at 9:58 am and is filed under HOCKEY, Podcast, RotoRob. You can follow any responses to this entry through the RSS 2.0 feed. You can leave a response, or trackback from your own site.