The Wire Troll: Ben Revere to the Rescue 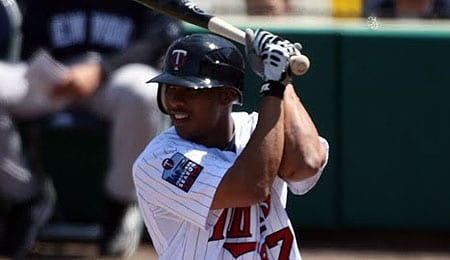 Ben Revere is riding to Minny to replace Jason Kubel.

The next wave of young talent is just around the corner. Brett Lawrie, Desmond Jennings, Dustin Ackley, Anthony Rizzo, Mike Moustakas, and Lonnie Chisenhall are just a few of the prospects that are currently the talk of the town as we eagerly anticipate the annual right of June. Beyond these hyped kids there are some other options that can provide assistance to your Fantasy squad that shouldn’t be ignored. It’s always fun to play the speculating game, but life as we know it does move on. With that in mind, let’s take a look at some of the trolling options for the coming week.

Ben Revere, OF, Minnesota Twins (CBS: 5 per cent owned, Yahoo!: 0 per cent): The disaster that is 2011 for the Twins continues without relief. Now Minny’s best bat this year — Jason Kubel — hit the DL last week with a sprained foot. The Twins have recalled Revere to fill the gap and so far he’s gone 5-for-12 with three runs scored and a stolen base. Revere’s gig is likely a temporary situation, but it’s still one that could provide value in both AL-only and deeper mixed leagues.

Aaron Crow, RP, Kansas City Royals (CBS: 49 per cent owned, Yahoo!: 46 per cent): After watching incumbent closer Joakim Soria implode to the tune of eight earned runs and three losses over a four-game span last weekend, the Royals were forced into making a move to shore up the ninth inning gig. Crow has been anointed the closer in Kansas City — at least for now. In his past two outings Crow has allowed three earned runs, while in three IP over two opportunities since his demotion, Soria has been perfect. Our advice: bid cautiously. Crow has the job, but how long he’ll keep it remains to be seen.

Corey Patterson, OF, Toronto Blue Jays (CBS: 41 per cent owned, Yahoo!: 33 per cent): As difficult as it is to believe (at least for me), Patterson just continues to roll along. In his past 10 games, he’s hitting .378 BA with three homers, eight RBI, and 11 runs scored. If he’s still available in your league get him rostered and active immediately. Stats such as he is producing are simply too valuable to be sitting in your free agent pool.

Dillon Gee, SP, New York Mets (CBS: 44 per cent owned, Yahoo!: 16 per cent): Gee shut down the Braves Saturday over seven frames in a 5-0 shutout, upping his record to 6-0 on the year. One of the keys to the 25-year-old righty’s success is keeping the ball on the ground as evidenced by the 12 ground ball outs he induced Saturday. Gee is currently sporting a 3.33 ERA and 1.11 WHIP over 54 IP to go along with 39 punchouts and he should be active in all formats.

Josh Willingham, OF, Oakland Athletics (CBS: 43 per cent owned, Yahoo!: 30 per cent): Very quietly, Willingham has been posting solid power numbers for the Athletics. In May he smacked five homers and drove in 20 runs and has remained hot into June by going 5-for-14 with one homer and four RBI. The batting average will always be a concern, but the power numbers are impressive enough that he simply can’t be left languishing in your league free agent pool.

Rubby De La Rosa, SP/RP, Los Angeles Dodgers (CBS: 9 per cent owned, Yahoo!: 2 per cent): Jon Garland has landed on the DL with a right shoulder injury and the Dodgers have decided to give De La Rosa the first shot at filling the void. We’ve seen success this year from De La Rosa during Spring Training, at Double-A, and as a reliever in the bigs and I expect this trend to continue for the Dodgers’ 2010 Minor League Pitcher of the Year. In H2H leagues where streaming pitchers is the norm, he has potentially two starts this week — although match ups against the Phillies and Rockies both on the road is about as tough an indoctrination as a hurler could face. In mixed and NL-only leagues it might be best to sit him this week with those tough assignments.

Tony Campana, OF, Chicago Cubs (CBS: 3 per cent owned, Yahoo!: 1 per cent): Marlon Byrd is out until mid-July with multiple facial fractures. Reed Johnson is on the DL with on-going back issues. Campana is the beneficiary and should be looking at regular at-bats over the next 2-to-4 weeks. If your need is speed, the four thefts he racked up Monday against the Astros is a good indicator of what to anticipate moving forward.

Alexi Casilla, SS, Minnesota Twins (CBS: 6 per cent owned, Yahoo!: 2 per cent): In the past week, Casilla has gone 10-for-27 with three thefts and has his BA up to .254 on the season. You could currently do worse at filling the middle infield slot. Just ask those Trevor Plouffe owners.

Brent Lillibridge, 2B/OF, Chicago White Sox (CBS: 9 per cent owned, Yahoo!: 3 per cent): Manager Ozzie Guillen keeps finding Lillibridge at-bats, and rightfully so. Last week, he hit three homers, drove in five runs, and chipped in with a stolen base. Expect Guillen to keep on rolling him out as long as he’s wielding a hot stick.

Matt Dominguez, 3B, Florida Marlins (CBS: 5 per cent owned, Yahoo!: 0 per cent): The possibility of a DL stint increases daily for Hanley Ramirez and the Marlins are getting stretched a bit thin in the middle infield. Dominguez was penciled in as the everyday starter at the hot corner until a fractured left elbow sent him to the DL at the beginning of April and he could prove to be useful in NL-only leagues should Ramirez end up on the DL.

Jamey Carroll, 2B/SS, Los Angeles Dodgers (CBS: 19 per cent, Yahoo!: 20 per cent): Rafael Furcal has hit the DL, yet again, with an oblique injury that could sideline him for as much as a month. Carroll is enjoying a great year with 62 hits and 31 runs in 206 at-bats, and has chipped in with five thefts. The only question is how does a player with 62 hits manage to accumulate only five RBI?

Nick Hundley, C, San Diego Padres (CBS: 33 per cent owned, Yahoo!: 11 per cent): Hundley is currently on a rehab assignment at Triple-A Tucson and in his first start he smacked a three-run homer. He should be returning mid-week and should be rostered in all two-catcher and NL-only leagues.

Charlie Blackmon, OF, Colorado Rockies (CBS: 1 per cent owned, Yahoo!: not listed): Dexter Fowler continues to struggle for the Rockies with 66 whiffs in 210 at-bats this year. The rumour mill suggests that Blackmon is next in line for a promotion to the Colorado outfield. Down on the farm, Blackmon currently has 10 homers, 49 RBI, 12 thefts, and a superb .342 BA. If you have the bench space, he could prove to be a solid acquisition and — at least for now — a relatively cheap one.

By Tim McLeod
This entry was posted on Sunday, June 5th, 2011 at 1:26 pm and is filed under BASEBALL, The Wire Troll, Tim McLeod. You can follow any responses to this entry through the RSS 2.0 feed. You can leave a response, or trackback from your own site.