NFL News and Notes: Plaxico Burress to Return to the NFL 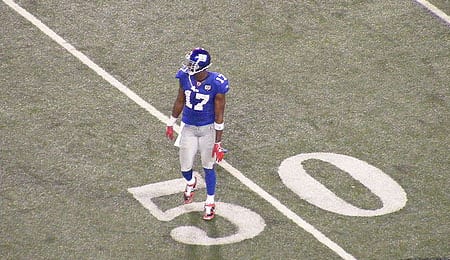 Who will take a chance on the baggage-ridden Plaxico Burress?

Well, Plaxico Burress is now of jail and the 33-year-old is now looking to trade his orange jumpsuit in for an NFL uniform. But who is going to take a chance on a dude that was not only stupid enough to carry a concealed weapon into a nightclub, but to actually shoot himself with it?

We can pretty much rule out a return to his first club, the Steelers. However, that other Pennsylvania-based club, the Eagles, have been known to take a chance on ex-cons (Michael Vick). The two of them hooking up on a TD pass would be like a scene right out of the Longest Yard. It’s a match made in heaven.

The Rams had been discussed as a possible suitor, but that rumour has been shot down as St. Louis plans to employ a two-tight end formation.

In all, no more than three or four teams are expected to show any interest in the aging wide receiver. We know that Jacksonville is not interested, but it’s not beyond the realm of possibility that the Giants may want him back. Burress says he’s open to returning to New York, but what did you expect him to say? He has to know that with all his baggage, he can’t afford to shut any doors at this point.

Other possibilities: the Jets, the Vikings, the Redskins and the Bears. I’ve also heard some wondering whether the Arizona Cardinals would take a chance on Burress.

I guess the biggest question here is how did almost two years in jail affect his game? Well, that depends on whether, come shower time, he was pitching or receiving. Well, Plaxico? Which one was it?

Vick is obviously the best comparison to Burress’ current situation, proving that a player can not only come back after time in the big house, but be very successful in doing so. We know that Vick is bending the ears of Philly management, telling them they should take a chance on Burress.

The fact that Burress’ agent is Drew Rosenhaus will be a factor, as this is a dude that can probably sell milk that’s a month past its expiration date.

Of course, what’s really interesting in this scenario – assuming Philly is the frontrunner for Burress as most believe – is how another of Rosenhaus’ clients, DeSean Jackson, feels about having to share the ball with Burress. Nothing like pissing off one client to make another happy.

Besides, with Jackson and Jeremy Maclin (not to mention highly underrated Jason Avant and TE Brent Celek) already in place, do the Eagles really need to gamble?

By RotoRob
This entry was posted on Saturday, June 11th, 2011 at 12:29 pm and is filed under FOOTBALL, RotoRob. You can follow any responses to this entry through the RSS 2.0 feed. You can skip to the end and leave a response. Pinging is currently not allowed.