David Price and the Lesson of Post-Hype Bargains 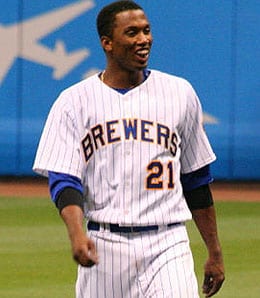 Time and time again you’ve probably seen – and experienced yourself – that strange phenomenon known as rookie lust. And no, we’re not talking about the leers you give the plaid-skirted schoolgirls…you should probably keep that particular pastime to yourself. We’re talking about the ridiculous hype heaped upon prospects that nearly are ready for the majors and rookies who have recently arrived there.

Grown men, drooling at the prospect of nabbing the next Roger Clemens or Barry Bonds (sans steroid version, naturally), falling all over themselves to get to a computer and pluck these kids off the wire. It’s uncanny.

But the thing is, very few of these kids make an immediate impact. There are nearly always growing pains, and before you know it, that prospect is back on the wire while we transfer our attention and adulation to the next great prospect.

But what happens to those youngsters who didn’t win the Cy Young, hit 50 homers or generally achieve whatever unrealistic expectations we had of them? Usually, they wind up either on the waiver wire and tend to be massively undervalued when the next draft day comes around.

As the top overall pick in the 2007 draft, the hype surrounding Price was off the charts and only amped up when he arrived in the Show late in 2008, pitching well enough in one start and a few relief appearances that the Rays kept him around for the postseason. And the fact that Price looked phenomenal during Tampa’s run to the World Series, winning one game and saving another on the national stage, only intensified the demand for him come draft day 2009.

I mean, come on. It’s not as if his 10-win, sub-4.50 ERA and over 100 strikeouts in 128 1/3 IP represented an awful debut. But when draft day rolled around this spring, Price wasn’t going off the board until sround the 14th round. Some of the duds that went before Price included Rich Harden (now, there’s a safe pick!), A.J. Burnett, Scott Baker and Wandy Rodriguez. Sure, it was reasonable to expect better results from all four of those contenders for disappointing starter of the year, but it was also reasonable to expect a big step forward from Price, who was just 24 years old at the outset of the season. And how many Harden, Burnett, Baker or Rodriguez owners are now kicking themselves for not taking Price when they had the chance?

There’s a lesson here: don’t forget about these hyped kids who don’t necessarily set the world on fire in their first go round.

Looking forward to next season’s draft, who might wind up as a post-hype bargain? It’s a tough question to answer in late-June, because the possibility still exists that any one of these players could go on a tear between now and the end of the season, thereby upping their draft position in 2011. But here are few names to tuck away who could prove to be bargains on your next draft day.

Brian Matusz, SP, Baltimore Orioles: It’s been a real struggle this season for Matusz, a hurler many expected to be a serious AL ROY candidate. After a mediocre April (4.40) and an awful May (7.50), it finally looked like he was righting the ship this month, and then he got absolutely shellacked by the Marlins in his last start, dropping him to 0-8, 5.11 over his last 12 outings. Ugh. It’s been a lost season for pretty much all involved with the Orioles this season, but there’s no denying Matusz’s talent and pedigree, so I expect him to start delivering on that promise big-time in 2011. To a lesser extent, you can include Jake Arrieta and Chris Tillman in this discussion. Man, that is going to be one hell of threesome in time.

Justin Smoak, 1B, Texas Rangers: He’ll continue to get his chances because he’s a solid defensive first baseman and Texas’s potent lineup can absorb his mostly pop-gun like numbers, but Smoak is a smouldering volcanco waiting to erupt. I consider him the best pure hitting prospect of the 2008 draft, and although he hasn’t delivered yet, this 23-year-old has tremendous upside. In fact, after his putrid showings in April (670 OPS) and May (590), we’ve already seen Smoak start to come alive this month, batting .291 with four dingers and 22 (!) RBI. He’s starting to look more comfortable at the plate, and his low BABIP suggests that he’s due for a serious spike in BA in the second half. I still think his final numbers won’t be impressive enough for him to be a high draft choice next season, so expect Smoak to a player who outperforms his draft position in 2011.

Alcides Escobar, SS, Milwaukee Brewers: The Brewers dealt J.J. Hardy in the offseason to clear the decks for Escobar, and while he hasn’t been much of an offensive force or the serious threat on the basepaths we anticipated, Escobar is still playing everyday at a tough-to-fill position. Rickie Weeks is having a great year atop the Brewer batting order, but you know his next serious injury is coming soon and, besides, I still see Weeks as more of a two-hole or even three-hole hitter in the long run. As a minor leaguer, Escobar showed top-of-the-order skills, and that’s where his future lies. I believe this kid has .300, 10-homer, 40+ steal potential, especially once he starts to become a little more selective at the plate. Escobar can pick it at short, so don’t worry about him ever shifting away from the position, and whatever you do, don’t forget about him on draft day next season.

By RotoRob
Tags: David Price
This entry was posted on Tuesday, June 29th, 2010 at 5:26 pm and is filed under BASEBALL, RotoRob, Sleepers. You can follow any responses to this entry through the RSS 2.0 feed. Both comments and pings are currently closed.