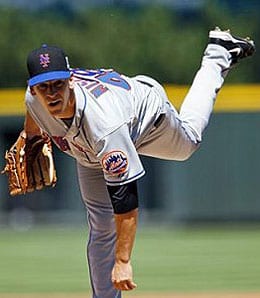 Will the Mets again need to call on Pat Misch this season?

Pop quiz: who threw the two complete game shutouts the Mets had in 2009? Nelson Figueroa, now a swingman for the Phillies, had one. The other was the responsibility of Pat Misch, who actually was serviceable in a swingman role last year when New York’s staff was besieged with injuries. His reward? Removal from the 40-man roster right before the season started. Well, the 28-year-old lefty is still in the system, pitching in Triple-A Buffalo, and while the Mets’ pitching has been very strong so far, any rash of injuries or ineffectiveness could again bring the Giants’ seventh rounder from 2003 back to the bigs. A control pitcher, Misch’s big-league struggles in parts of four seasons can be traced to his gopheritis as he’s yielded 23 long bombs in 156 career innings, a rate that might even make John “Way Back” Wasdin blush. This year, Misch is again getting the job done, having gone 2-0, 4.13 through five starts despite the fact he’s been far too hittable (.306 BAA). Still, I wouldn’t be surprised to see him work his way back to New York, especially if we see more outings like Oliver Perez put up his last time out.

As if the Tampa Bay Rays didn’t have enough pitching in the bigs, Jeremy Hellickson’s domination of Triple-A suggests he’s clearly ready for the Show as well. And now, Aneury Rodriguez, the starter they got from Colorado at the beginning of last season for Jason Hammel, has reached Triple-A and is looking extremely sharp, Friday night notwithstanding. This 22-year-old righty moved up a level per year in the Colorado system, and the Rays maintained that trend, sending him to Double-A last season. While his strikeout rate has dipped the last couple of years, Rodriguez did improve his hit rate last year, but was hurt by an increase in walks. So the Rays started him out at Double-A again this season, but after two dominant starts, Rodriguez was moved up to Triple-A. In his first two starts, he proved he was ready, as he did not give up a run in either game. Friday, as discussed, he ran into his first trouble, but with a 2-1 record, 2.08 ERA and .200 BAA (just .138 against righties), Rodriguez has put himself on the map as someone to watch. Armed with a 92-93 mph fastball, a curve, a changeup, and a perfect pitcher’s body (6’3”, 180), Rodriguez will soon be ready for the bigs, not that pitching-rich Tampa has any room for him, mind you.

Did you happen to catch the game thrown by veteran righty R.A. Dickey for Triple-A Buffalo on Thursday night? The dude yields a lead-off single and then sets down 27 straight hitters to break the Bison record of consecutive outs. The previous record was 25, set by Bartolo Colon on June 20, 1997, in the only no-hitter of Cola-Cola Field’s history. Wow. If Dickey has any sense, he should pack it in right now, because it ain’t gunna get any better. The last time we checked in on him was 2008, when he was proving to be a disaster in Seattle. Well. Dickey is now 35, and while he wasn’t horrible in a swingman role for the Twins last year, his MLB chances are getting fewer and less important every year. Having said that, Dickey, who relies mostly on his changeup and knuckleball given that his fastball is so hittable, is looking very good in the early going this season, sitting at 3-1, 2.33 through five starts for the Mets’ top farm team. He’s only walked five batters in 38 2/3 IP, an encouraging sign given that he was plagued with control issues last season. Opponents have only hit .225 against Dickey this year, so who knows? He may get a look if injuries open some spots up in New York.

Fernando Perez was the man that ruined Dickey’s chance at a perfect game with that single to start the game. Unfortunately for Perez, that was one of only three hits he’s had in his last 18 at-bats as his once promising baseball career continues to fade. When we last checked in on Perez just under two years ago, we was starting to figure out Triple-A pitching, and sure enough he wound up having a decent year and earned his first taste of the Show. That put him in rare company as just the 13th graduate of Columbia University to play in the majors. Of course, that group includes all-time greats Lou Gehrig and Eddie Collins. But, having turned 27 this week, it’s pretty clear that Perez won’t be enjoying a career anything like that pair. Last season, he played in just 21 games as an injury in Spring Training cost him almost the entire campaign. And this year, as discussed above, Perez has been struggling with an OPS of just 679 that hardly screams “call me up.” The speed – his primary weapon — is definitely still there as he’s swiped 10 bases in 21 games, but Perez remains a poor contact hitter as evidenced by his 14 strikeouts against just six walks. I think our original projection that he could wind up as a fourth or fifth outfielder is looking generous at this point.

By RotoRob
This entry was posted on Saturday, May 1st, 2010 at 3:46 pm and is filed under BASEBALL, Minor Matters, Prospects, RotoRob. You can follow any responses to this entry through the RSS 2.0 feed. You can leave a response, or trackback from your own site.