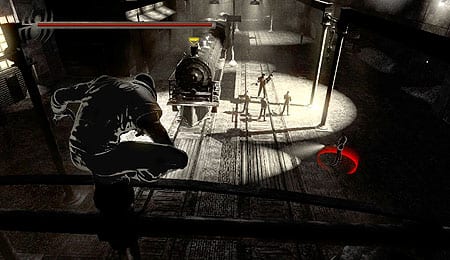 Staying concealed is crucial in the Noir levels as this Spidey takes a beating once he’s discovered.

For a long time superhero titles were saddled with a well deserved reputation as one of gaming’s worst sub-genres. So much so that even the best of the bunch often carried the disclaimer of being good “for a superhero game.” In many ways, Batman: Arkham Asylum changed all of that — here was an excellent video game, elevating the source material rather than dragging it down.

Now, in that same vein, comes Spider-Man: Shattered Dimensions, and while it might not be the Game of the Year contender Arkham Asylum was, it definitely delivers plenty of satisfying action.

Playing as four variations of Spider-Man there are a lot of moves at your disposal, though plenty of overlap occurs from one version to the next. Developer Beenox has done a nice job of keeping the gravity defying acrobatics of everyone’s favourite web-slinger simple to execute. Cool takedowns and the ability to launch Spidey from one perch point to another are pulled off with a single button, making exploration and combat highly accessible.

Where the game has issues is with its occasional inability to distinguish between the point-to-point and freestyle web slinging. In theory, pressing it once will snap you to an object, while holding it down lets you swing from unseen items above. In practice it’s imprecise, leading to some undeserved damage and unplanned tumbles. Mercifully, they’re rarely fatal thanks to a recovery prompt.

With Shattered Dimensions splitting time between the four unique art styles, it’s really impressive just how strong each of them look. From the familiar visuals of the classic “Amazing” version to the dark, gritty “Noir” levels, this game consistently delivers the feeling that you’re playing a comic book that has sprung to life. There’s also a nice amount of diversity within the styles as you’ll traverse memorable locations like a massive power plant, sprawling jungle ruins and an old mining facility that’s being torn apart by a towering sandstorm.

Spider-Man moves very fluidly here, effortlessly flying across the levels and pummeling multiple baddies simultaneously. There’s plenty of variety with your enemies, too, ranging from your typical lower level foes that serve as little more than punching bags all the way up through some epic boss fights that are distinctive and memorable.

While the game has quality voice acting throughout, whether or not you ultimately embrace it will depend largely on your feelings about Spider-Man’s flippant attitude. He never seems the least bit flustered or intimidated and will constantly make wise cracks about his enemies as he pursues them through the levels, though some versions are more abrasive than others. The villains are consistently well represented while the game’s score is strong.

The game begins with Mysterio stealing an ancient object from a museum, and when Spider-Man intervenes, the tablet is broken. Naturally, this was no ordinary tablet, and destroying it has now caused problems with the space/time continuum. The pieces have been scattered to four separate dimensions where Madame Web tasks each world’s Spider-Man to track down and recover them. As you might imagine, however, that’ll be easier said than done as the tablet’s remnants draw evil to them, infusing these nefarious villains with supernatural powers. It sounds interesting on the surface, but in practice it ends up being little more than a cookie cutter story with minimal depth, serving as a passable backdrop to a lot of exciting adventures.

Following a brief tutorial level that allows you to spend a little time in each world, Shattered Dimensions starts off with you assuming control of the Amazing Spider-Man (the one most people are used to) before opening up and allowing gamers to complete the remainder of the game as they see fit. When it’s all said and done you’ll have played three full levels — one per Act — as each version of Spider-Man, leading up to the final showdown with all four playing a role.

Each dimension has a unique focus to keep combat fresh. For instance, Noir Spidey is all about skulking in the shadows and dealing with your enemies quietly, thus you’ll spend much of those missions trying to avoid detection. Conversely, Ultimate Spider-Man is sporting the Venom suit and is much more aggressive, building his rage meter to unleash a violent fury on his foes. That diversity helps make each stage feel different as opposed to rehashing the same strategies battle after battle.

During each level you’ll be presented with a series of challenges, ranging from standard stuff like defeating X number of enemies or finding all the hidden spiders to more elaborate ones such as performing different types of takedowns or beating a boss under a target time. Completing these challenges will give you spider essence, which is then used to purchase new abilities. These take the form of character (more health, alternate suits, extended rage time) and combat (new combos, added moves) upgrades. You can also replay the levels as many times as you want, allowing you to boost your abilities if you’re finding things too tough.

For all it does well, Spider-Man: Shattered Dimensions does struggle in spots. For starters, an inherent issue with varying the way each version does battle is that some levels will be better than others, which is the case here. I wouldn’t go as far as to call any of the levels poorly designed much less downright bad, but there are those that for one reason or another aren’t as fun. Plus, despite the focus on changing up strategies, you’ll find that the levels tend to follow a pretty tight script when it comes to progressing — preliminary boss battle, fight underlings, save civilians, fight slightly stronger underlings, and then decisive boss battle.

Undoubtedly, though, the title’s biggest gameplay issue is the camera. Yes, in many instances you have the ability to move it around, but there are times throughout the game when you have to concentrate on what you’re doing and the camera becomes a significant hindrance. Primarily this happens when web swinging or trying to traverse an area rapidly, though it’ll also pop up during combat, allowing your enemies to score some unmerited hits. Also, on a couple of occasions I fell and became so disoriented when trying to use the recover ability that I eventually just let myself die because I couldn’t get back to the level’s main path.

In terms of longevity, Spider-Man: Shattered Dimensions does a nice job of compensating for the lack of a multiplayer component by dangling challenges, collectables and other rewards for completing levels on the various difficulty settings in front of gamers.

Comfortably better than any other Spidey-related title on the Xbox 360 or Playstation 3, Spider-Man: Shattered Dimensions offers gamers a lot of fun levels to explore and impressive battles to fight — it’s just too bad that the lack of depth in the narrative makes each one feel mostly isolated rather than being part of a gripping story arch.

By Herija Green
This entry was posted on Sunday, October 3rd, 2010 at 2:36 pm and is filed under Herija Green, Video Game Reviews. You can follow any responses to this entry through the RSS 2.0 feed. You can leave a response, or trackback from your own site.