The Wire Troll: The 2010 Batting All-Stars 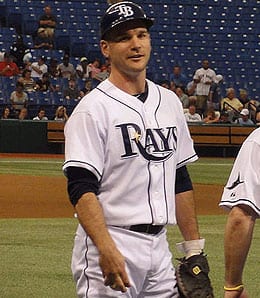 John Jaso was one of the top catchers that were on the wire this season.

It’s time to look back at the season to date and give those waiver wire gems their due respect. It has been an amazing year and as always the waiver wire was huge in determining the overall outcomes in league play. This week, we’ll review the offense followed up by a review of the pitching next Sunday. Without further ado, let’s get rolling and recap some of the gems that made our 2010 Fantasy season cause for celebration.

Buster Posey, San Francisco Giants: The Giants finally made the move at the end of May and recalled their catcher of the future from Triple-A Fresno and there was no looking back. In his inaugural campaign, Posey displayed both skill and poise way beyond his youth. In 379 at-bats, he has slugged 16 homers with 64 RBI with a robust .317 BA. The six homers Posey has smacked so far in September have been instrumental in keeping the Giants in the hunt for the NL West title and guaranteed his status as one of the first group of catchers to move off the board in Fantasy drafts in 2011.

Gaby Sanchez, Florida Marlins: Sanchez won the job out of Spring Training and was slated to keep the position warm until the eventual call-up of Logan Morrison, the supposed real first baseman of the future in Florida. A funny thing happened with this plan in that Sanchez took hold of the job and just didn’t look back eventually forcing the Marlins to move Morrison to the outfield. Sanchez’s 19 homers and 82 RBI, combined with a decent .278 BA, have been a huge bonus for those that gambled early on the league waiver wire and this bodes well for his future success in 2011.

Kelly Johnson, Arizona Diamondbacks: Many of us thought that a bounce-back campaign was in the cards for Johnson when he was dealt by the Braves to the Diamondbacks, but nobody could have anticipated the start he got off to. In April, he slugged nine homers, drove in 18 and was instrumental in many Fantasy teams getting out of the gate strong. Currently, Johnson has hit 25 big flies with 69 RBI, scored 90, stolen 12 bases and has a solid .280 BA. He’s also managed to strike out 137 times so he fits in well with Arizona’s hitting philosophy (go deep or whiff and go back to the dugout). Those that gambled early on with Johnson reaped some rather large rewards out of their middle-infield.

Yuniesky Betancourt, Kansas City Royals: Who could have seen this one coming? Betancourt has toiled away and produced mediocre numbers for years, and has been very good at it. But this season, in a year in which the shortstop position was a constant challenge from a Fantasy perspective, he came out of nowhere (or Kansas city, as the case may be) to mash 16 homers, drive in 76 runs and hit at an acceptable .260 rate. Betancourt was one of the lone bright spots in a rather typical season in America’s heartland.

Jose Bautista, Toronto Blue Jays: Bautista has single-handedly carried Fantasy teams in offensive categories — especially in AL-only formats — and he has to be the Fantasy MVP for 2010. He’s currently leading all of baseball in homers with 52, is second in RBI with 118, and is tied for sixth in runs scored with 105. Prior to this season, Bautista’s single-season high in home runs was 16. He currently has an 11-dinger lead on his closest competition, Albert Pujols, and a 14-homer lead on his nearest competition in the AL, Paul Konerko. Simply incredible is the only way to describe Bautista’s season. Who could have seen this one coming? If Bautista was playing on larger market east coast team, they would have had his name carved into the MVP Award by mid-August.

Chris Young, Arizona Diamondbacks: Coming off a 2009 season where he struggled to surpass the Mendoza line, Young without a doubt has to be the consensus runner-up to Bautista as our 2010 Fantasy MVP. He has finally put together a season that many of us were drooling in anticipation to see after his fine 2007 campaign. Young has slugged 26 homers with 86 RBI, stolen 27 bases, and has managed an acceptable .260 BA. He’s delivered Matt Kemp value, while costing just a tad less than what you likely spent on the disappointing Dodger.

Angel Pagan, New York Mets: Carlos Beltran took forever to get off the DL. Jason Bay spent most of the season on it and Pagan stepped up and proved to be one of the few bright spots in a rather dreadful year for the Mets. The 29-year-old journey man has slugged 11 homers, driven in 69, scored 77 times and stolen 35 bags in 547 at-bats in his first go-round as a full-time player. Pagan has proven to be quite the bargain for those that took the chance on the waiver wire back in April.

Michael Stanton, Florida Marlins: The man-beast has arrived in Florida. The 20-year-old phenom was recalled June 8 from Double-A Jacksonville and immediately made his presence felt. Yes, Stanton strikes out way too often but — and it’s a very big but — he has slammed 21 homers and driven in 52 runs in just 328 at-bats. That 40 home run potential will make Stanton a very interesting and sure-fire early pick in most Fantasy drafts next spring.

Andres Torres, San Francisco Giants: On an offensively-challenged Giants’ squad 32-year-old Torres moved into the lead-off role and didn’t look back. He has managed to swat 15 homers, drive in 61 runs, score 82, and steal 23 bases to go along with a decent .269 BA in 483 at-bats. We’re talking about a player who broke in with the Tigers way back in 2002 and managed to hit a grand total of seven homers with 36 RBI and 15 stolen bases in his career prior to the 2010 season. Simply amazing! Where would the Giants be this season without the contributions from both Torres and Posey?

Ryan Raburn, Detroit Tigers: Has there been anyone hotter than Raburn down the stretch? The fractured ankle that ended Magglio Ordonez’s season opened the door for Raburn and he hasn’t looked back. In August, he mashed eight homers, drove in 21 runs, and scored 20 times. He’s followed that up by hitting four more dingers so far in September, while driving in 15 and scoring 15 runs. How many winning Fantasy teams this season will have Raburn on their active roster? The fact that he may qualify at first base and second base depending on your league rules is gravy.

Omar Infante, 2B/3B/OF, Atlanta Braves: We gave him grief for being an All-Star selection, but along the way, Infante has managed to become a very consistent contributor in the resurgent Brave lineup this season. Although the eight homers and 44 RBI are not HOF caliber, his .329 BA, combined with his versatility (he may qualify at every infield position except catcher and first base), have made him a valued commodity.

By Tim McLeod
This entry was posted on Sunday, September 26th, 2010 at 3:34 pm and is filed under BASEBALL, The Wire Troll, Tim McLeod. You can follow any responses to this entry through the RSS 2.0 feed. You can skip to the end and leave a response. Pinging is currently not allowed.