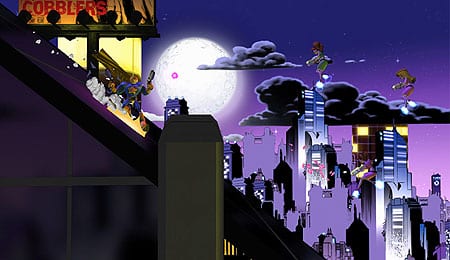 The sinister Bradbots are no match for the dashing Captain Smiley!

It was last year when developer Twisted Pixel opened eyes with the release of Splosion Man, one of the most simultaneously endearing and challenging games available on Xbox Live. I’ll admit to being a bit disappointed when its newest endeavor, Comic Jumper, wasn’t part of the recent Summer of Arcade, but thankfully it has made its way into the ongoing Game Feast, and it was absolutely worth the wait.

Although there are a handful of hand-to-hand combat sections in Comic Jumper, the majority of your time will be spent jumping and firing your guns, and as long as things don’t get too hectic on the screen there aren’t any notable deficiencies in the controller layout. However, some stages ask you to move back and forth (left analog stick), jump over objects (A) and still aim (right stick) and constantly fire your weapon (right trigger), which makes for an overly busy controller.

To be fair, there are multiple ways to do several of the functions, including aiming and firing, but none of them directly alleviate the issue. Instead it would’ve just been nice if there were an option to fire by simply pushing the right stick a la Zombie Apocalypse rather than having to hold down the trigger.

Just as Splosion Man represented a sizable step up visually from The Maw, Comic Jumper distances itself from Twisted Pixel’s previous releases. The backgrounds, a real weakness in Splosion Man, look much improved here and the comic book brought to life aspects translate very well — of particular note is the cool way the game prevents excessive backtracking by having you reach the boundaries of the “panel” you’re currently in.

The game’s levels each offer up their own unique feel, ranging from a Conan the Barbarian spoof to a hilarious take on manga. Seeing the game’s cast of characters change as they’re transported into these alternate worlds set up some great visual gags and really mixes things up so you never feel like you’ve spent too long in any one location. Credit is also due for keeping things light during some fairly tough sections through the use of classic comic clichés like seeing the worlds BOOM and BANG appear on the screen when fighting enemies. It’s very well done.

As solid as things are graphically, the developer’s fantastic sense of humour really shines through in the audio department. Anyone who played through Splosion Man likely remembers the donuts song. Well, this time around Twisted Pixel has written and recorded an entire series of original songs. Combine those with the game’s witty and self-deprecating dialogue and you’ve got one of the most legitimately funny games I’ve ever played.

You are Captain Smiley, the star of your very own comic book. Unfortunately, your comic book is universally reviled and is being cancelled because people think it sucks. Just when things look dire, video game developer Twisted Pixel swoops in to buy the failing strip and tasks you with earning enough money to relaunch the series. Much to your personal chagrin the only way you’re going to do that is by guest starring in other comic books. Oh, the humiliation!

Joining the Captain on his adventures is Star, your wise cracking sidekick that just happens to, (a) be attached to your chest, and (b) hate your guts. The constant interplay between the two of them makes for some of the game’s funniest moments with Star relishing in any opportunity to insult or belittle Smiley. Your personal assistant, Gerda, will guide you on your way, though she too holds nothing but contempt for her employer.

After an initial mission that takes place in your soon-to-be-cancelled comic, the game brings you into a central hub, which includes things like a break room for out-of-work villains to hang out in, from which you’ll jump into the guest starring roles. Each such appearance will last a total of three issues, giving the game a total of 11 missions, and you’ll also unlock two additional challenges per comic (eight overall). It’s a good amount of content to be sure, and the replay value is high as you try to improve your score as well as complete the secondary objectives (such as take no damage while fighting a boss) contained in the missions.

In terms of gameplay, Comic Jumper is primarily a side-scrolling 2D shooter with 3D backgrounds. So while enemies will enter through windows or fly in from the background, they won’t engage from there. The game also mixes in some quick time event portions and melee combat as well as several rail shooting sections in the vein of Space Harrier. My favourites are definitely the straight shooter sections as the hand-to-hand segments present virtually no challenge and the rail portions feel kind of outdated.

Each mission contains one or more boss fights, and in typical old school fashion you’ll need to memorize patterns and exploit openings to win. Some of the battles are better constructed than others — the showdowns with Brad are a blast — but they hold up well overall.

After finishing each mission or challenge you’ll be scored based on your performance and awarded cash, which you then use to purchase upgrades and a boatload of extras. On the upgrade front you can augment Smiley with things like additional health and more gun damage, which is nice as it gives gamers the option of replaying levels to grind for cash if things get a little too tough. You can also buy lots of cool items to unlock such as videos, concept art and even new levels for Splosion Man! In addition, each extra provides an end-of-level bonus percentage, supplementing the amount of money you earn.

Ultimately, though, what separates Comic Jumper from other similarly structured experiences is the cast of characters you meet and the fantastic interactions between them. I’ve already touched on the banter between Smiley and Star, but there is so much great content beyond that it becomes almost as much fun to talk to the characters after levels just to hear their new dialogue. The villains mock Smiley at every turn, especially Brad, who is one of the funniest video game characters ever.

Having sunk over ten hours into Comic Jumper, it’s unclear why this wasn’t used to launch Microsoft’s Game Feast promotion. It has all the elements — distinct characters, strong graphics, good action and replay value, humour — gamers are looking for in an Xbox Live Arcade title. It’s hard to imagine anyone playing through this and not enjoying the ride.

Check out our contest for a chance to win a free copy of this game.

By Herija Green
This entry was posted on Tuesday, October 5th, 2010 at 11:15 am and is filed under Herija Green, Video Game Reviews. You can follow any responses to this entry through the RSS 2.0 feed. You can leave a response, or trackback from your own site.