Fantasy Notes: Time to Give Randy Wells Another Chance? 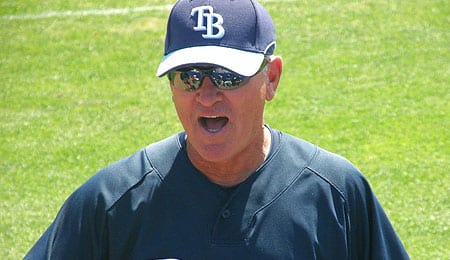 Joe Maddon has done a great job with the Rays, but for our money he is not the AL Manager of the Year.

Should Fantasy owners give Cub starter Randy Wells another look after his superb start against a desperate St. Louis squad this week? In perhaps his best start of the season, Wells limited the Cardinals (sans Albert Pujols, it’s worth noting) to five hits and one run over eight strong innings. He struck out five, but more importantly did not issue a walk – the first time in almost a month and a half Wells could make that claim.

Wells has been nothing if not inconsistent in his sophomore season. He enjoyed a decent start (3-0, 3.45 in April), before struggling in May and June. Wells bounced back with a huge July (2-2, 1.83) before a poor August. So far, September has been a microcosm of his season, as Wells got cuffed around in his first two starts before tossing the gem against the Cards.

At the very least, he’s been dependable, taking the hill 30 times – second on the team to Ryan Dempster’s 31 starts, and he’s actually improved his command this season. The problem is, far more hits are dropping in against Wells, and he’s also allowing more dingers.

One key point worth mentioning, however, is that Wells has been fairly unlucky this season, as his BABIP is .324 – 30 points above his mark from last season. So while he may not be quite as good as his 3.05 ERA suggested last season, he’s definitely better than his current 4.46 mark. And that makes Wells a bit of a sleeper heading into 2011. At the age of 28, there could a small measure of upside in his game still to come.

As for this season, he makes for a decent speculative pick up, but I’d be a bit wary about having Wells active for his next start on Tuesday at home against the Giants – a team driving towards a division title.

Switching gears, who do you like for American League Manager of the Year? Tampa Bay’s Joe Maddon and certainly Ron Washington in Texas deserve plenty of consideration, but how about Ron Gardenhire in Minnesota? The Twins have turned things around the past couple of months, morphing what looked like a three-horse race in the AL Central into a laugher. And now they’re knocking on the door for the best record in baseball, just a game behind the Yankees and a half-game back of the Rays.

Think of what this team has overcome. First, there was the loss of super closer Joe Nathan back in Spring Training. No problem, they just plugged Jon Rauch in, and then they improved on that by trading for both Matt Capps and Brian Fuentes. Instead of having no closers, they now have three, with Nathan expected to return next season. A weakness became a strength.

How about Justin Morneu’s concussion, which has knocked him out of action since the All-Star break? No problem…the team just shifted Michael Cuddyer over to first base, opening up a slot for exciting youngster Danny Valencia to play at third base. Obviously the loss of Morneau hurt, but the Twins experienced some addition by subtraction by not having to deal with the inept Nick Punto–Brendan Harris platoon at third. Yuck.

Speaking of Cuddyer, both he and Jason Kubel have been unable to duplicate their success from 2009, yet the Twins have remained one of the best hitting teams in the American League.

The pitching staff has had a couple of key injuries to deal with, yet the team still ranks second in ERA in the AL.

Whatever obstacles have been thrown at this team, they’ve overcome them.

Yes, it’s time for Gardenhire to finally be named the AL Manager of the Year.

Still, we must give kudos to Texas. If you can believe it, it was just four years ago when Kevin Millwood was the ace of the Rangers, and John Koronka was actually a part of the rotation. Koronka has bounced around since, from Triple-A to Japan to the Marlins to this season, when he pitched at Double-A and Triple-A in the Dodger organization before being released. He wound up in Indy ball, and to say it has not gone well for the 30-year-old is an understatement.

In six games (five starts) for the Southern Maryland Blue Crabs of the Atlantic League, Koronka is 0-4 with an 11.74 ERA. In 15 1/3 IP, he’s given up 15 hits. Not bad, right? Oh, then there’s the 33 walks he’s issued, plus three wild pitches and two hit batsmen. Now Koronka was never known for his control, even when he somehow managed to hold down a major league job, but this is just silly. Thirty-three walks out of 92 batters faced. It’s time for a new profession, John.

After flaming out in the rotation and being shifted to the bullpen, is Sergio Mitre even going to make the Yankees’ post-season roster? It’s a fair question, and it could come down to Mitre and Chad Gaudin for the long-reliever role. Mitre certainly isn’t making his case lately; he’s only worked in two games this month, and neither outing was particularly good. Still, he showed what he’s capable of in his final appearance of August when he tossed 4 2/3 IP of one-hit, shutout ball. Mitre is definitely growing more accustomed to relief, having made more appearances out of the bullpen than any previous season in his career. And there’s no doubt he’s been much sharper coming out of the pen, with a .205 BAA as a reliever compared to the .291 BAA he endured as a starter. Unfortunately, his current role leaves him with virtually no Fantasy value whatsoever – even in extremely deep AL-only leagues.

By RotoRob
This entry was posted on Saturday, September 18th, 2010 at 4:17 pm and is filed under BASEBALL, Fantasy Notes, RotoRob. You can follow any responses to this entry through the RSS 2.0 feed. You can leave a response, or trackback from your own site.