More Questions than Answers in Texas 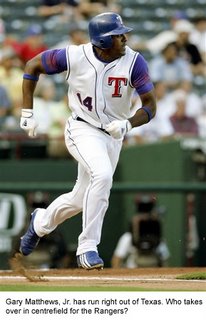 Has it really only been seven weeks since Buck Showalter got canned and I wrote about what a promising situation the new Texas Rangers’ manager would be walking into?

At the time, the Rangers seemed to have plenty of building blocks in place in their quest to finally rise above third place in the AL West.

The problem is, they haven’t done much since then to improve themselves. In fact, they have probably regressed. Now, it seems, there might be more questions than answers.

Let’s see. Instead of Gary Matthews, Jr. patrolling centre field with his Gold Glove, you’ve got who? Brad Wilkerson? Freddy Guzman? Instead of slugger Carlos Lee in left, Texas will have who? Frank Catalanotto? Instead of Mark DeRosa in a super utility role, the Rangers are left with who? Ramon Vazquez? And then there’s the starting pitching.

Like I said, more questions than answers. Maybe GM Jon Daniels has been busy trying to scare up a PS/3. He doesn’t seem to have been too occupied with filling the holes that keep cropping up on his team.

Let’s start at centre. The Rangers wouldn’t pony up the cash necessary to keep Matthews, and in some ways that wasn’t a bad plan. He’s coming off a career year at the age of 32. How big is the list of players who break out at that age and keep putting up huge numbers while playing one of the more difficult and physically demanding defensive positions on the diamond? I’ll let you think about that one for a while.

But in Matthews’ stead, who mans centre at AmeriQuest? Please tell me it won’t be Wilkerson. He’s injury-prone enough in left field. I can just imagine how he’d break down in centre. Besides, he’s the king of K at the plate. Let’s pray that the shoulder surgery he finally had will restore his once-impressive power. (Think about Wilkerson and Nelson Cruz manning two of the three Ranger outfield spots in 2007. Plenty of opposing pitchers will be racking up the K count with those two in the lineup.)

How about Freddy Guzman? He has classic lead-off skills: blazing speed, superb batting eye, and the ability to get on base. The chief problem here is that he’s a switch hitter who can’t hit righties, a not-so-minor issue. Maybe he needs to to focus on batting right-handed.

The Rangers lost out on Juan Pierre, but Dave Roberts is still available — barely. It looks like the Giants are about to seal the deal with him. Kenny Lofton, anyone?

DeRosa is another early-30s player who cashed in on a career year. Texas had its chance to keep him, but it would have required the Rangers to open up an infield spot. That would have probably meant trading Hank Blalock — an idea that had been bounced around for some time, but more recently shelved as the Rangers are committed to him as a building block.

So, dangled an opportunity to play everyday, DeRosa walked. No one can blame him, but it leaves a huge hole considering how valuable DeRosa was in 2006 — the dude played six different positions. Vazquez is a good back-up infielder, but he has never played the outfield at the major league level.

To replace Lee, Catalanotto was signed to a three-year deal with an option for a fourth. Uh, yeah. Look, the guy knows how to get on base, and as a result, he’ll take over as the lead-off man from Matthews. But he’s a corner outfielder/DH who has no power, does not steal bases and is weak against left-handed pitching. And you know he will never win a Gold Glove. So $13.5 million seems like a lot of money to spend on him.

Oh, and talk that Catalanotto will be able to see time in the infield? Don’t even go there. Sure, once upon a time in his last incarnation as a Ranger, he occupied the very type of utility role Texas so desperately needs now, but he hasn’t played anywhere in the infield since 2003 and hasn’t played second base since ’02. In an absolute emergency (assuming even RotoRob is unvailable, that is), Cat might be able to handle second or third for a couple of innings, but I can’t forsee a situation like that.

Matt Kata is now Rangers’ property. He’s hitting .270 with some pop in the Mexican Winter League if that inspires you. Could they be desperate enough to plug him into a utility role?

How about starting pitching? Just who the hell is in the rotation for this team? Right now, Kevin Millwood is the clear ace. And after him? Uh, yeah. Well, there’s John Koronka, Kameron Loe, Robinson Tejeda and Edinson Volquez.

Koronka showed some improvements this year, but he should be no better than a fifth starter and more likely is targetted for the bullpen. Loe is in the same boat.

Tejeda was actually quite good in the second half, and he looks like the number two man right now. He could be a sleeper in 2007, and Texas better pray he is given their other current options.

Volquez had a ton of potential heading into 2006, but seemed to do his damndest to try to pitch his way out of the team’s plans for the upcoming season. Despite his slide, the Rangers can’t give up on him, though, as he still has upside.

Texas is still trying to re-sign 15-game winner Vicente Padilla, but it has plenty of competition given the paucity of quality free-agent pitchers. The Mets, among others, pose the greatest threat to the Rangers here.

Another Ranger starter that’s a free agent is Adam Eaton, and again, Texas is in the running to bring him back, but he’s more likely to leave. That wouldn’t be a bad thing however, as Eaton is not exactly any innings eater, which is what the Rangers really need.

Barry Zito is still a possibility and, to a lesser extent, so is Jason Schmidt (although he’d prefer to stay on the West Coast). The Rangers are more likely to nab one of the available second-tier arms like Ted Lilly, Randy Wolf or Miguel Batista. Wolf, however, looks like he’s about to sign with the Dodgers.

That leaves the trade market, and Texas has been in discussions with the White Sox about Jon Garland, or possibly even Javier Vazquez. It’s going to cost them John Danks and more, however, so I don’t know how much I like this idea. From the sounds of it, this discussion has stalled anyways.

Danks, along with Volquez (assuming he rebounds), Thomas Diamond and Eric Hurley, represents the future of the Texas rotation. Given the Rangers’ troubles developing quality starters, they should be very slow on the draw to deal one of these kids.

Another option is packaging up an arm or two from their overflowing bullpen ranks for a starter. Texas has plenty of relievers and there are teams out there shopping.

It could be a long winter, leading to another long summer in Texas if the Rangers don’t make some significant moves to address some of these holes very quickly. There’s plenty of young talent already on board here with more on the way, but I don’t like the Rangers chances of moving up in the standings with a Milwood, Tejeda, pray for tornado situation.

Maybe it’s time for Daniels to put down his joystick and pick up the phone.

By RotoRob
This entry was posted on Monday, November 27th, 2006 at 10:25 am and is filed under BASEBALL, RotoRob. You can follow any responses to this entry through the RSS 2.0 feed. You can leave a response, or trackback from your own site.