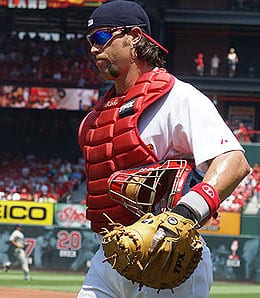 It’s an announcement that will hardly create Fantasy shockwaves, but it’s still worth noting that in the wake of a concussion he suffered last month, St. Louis catcher Jason LaRue announced his retirement on Saturday.

That’s what happens when you get hoofed in the head repeatedly as LaRue was by Red starter Johnny Cueto when St. Louis and Cincy got into an old fashioned dust up on August 10.

Back in the late ‘90s, LaRue looked like a future All-Star after back-to-back huge seasons in the minor leagues. But he was never able to come close to duplicating that offense above Double-A, although for a couple of seasons he was a serviceable Fantasy catcher when he was a starter for the Reds between 2001 and 2005. The last season of that run was the finest of LaRue’s career, as he hit a career high .260 (as sad as that sounds), with 14 homers and 60 RBI in 110 games.

By 2008, we thought he was pretty much done, but LaRue somehow stuck around the majors for another couple of seasons, and it was injury, not ineffectiveness, that removed him from the game.

Break up the Pirates? Pittsburgh swept Arizona this weekend, which in and of itself is nothing to brag about, but for the Buccos it marks their first three-game sweep since early May.

That’s not exactly teasing their fans, is it?

But truth be told, there is legitimately reason for optimism in sports fans in the Steel City (other than the Penguins’ or Steelers’ chances, that is). With a solid young core of Neil Walker, Pedro Alvarez, Andrew McCutchen and Jose Tabata, this team has the makings of a solid-hitting ball club. If they can get a bit of pitching, the Pirates have a chance of busting their streak of consecutive losing seasons soon. No, seriously.

Pittsburgh scored three times in the eighth on Sunday to rally past the D-Backs, with Walker’s two-run homer the key blow. It’s nice to see Walker hitting again. He had been slumping in the past week, but came through with four hits, two homers and five RBI this weekend. Walker looked really strong in July and August, so hopefully this weekend portents a hot end to his season. If Walker can improve his batting eye, I think he has a chance to be a .315 hitter with around 20 homers and perhaps 10 steals – not too shabby for a second baseman that was on the wire in shallower leagues in late July.

Back on July 23, the Nationals decided to pick up manager Jim Riggleman’s option for 2011. At the time, the Nats were 42-55 and dead last in the NL East – hardly anything worth writing home about, but, sadly, an improvement over their record in 2009. Can the Nats do a take back on that option? Since then, they are 20-32, bringing Riggleman’s record to 75-129 since he took over from Manny Acta halfway through last season. Acta put up a whopping .385 winning percentage in his two and a half seasons at the helm of the Nats. Riggleman is currently sitting at .368, yet he gets rewarded with another season. Does that make sense to you?

The Oakland A’s have already stolen 139 bases this season, third best in the majors and six more than they had all of last season when they ranked fourth in the majors. Remember that Rickey Henderson once stole 130 bases himself as a member of the A’s, but still, Oakland has done a good job of running the past couple of years, a necessity to help what is still a very weak offense scratch out some runs.

Rajai Davis is again the main man, seeing more action this year and topping his personal best with 44 swipes so far. Unfortunately, that’s pretty much all Davis has to offer Fantasy owners. His extra-base pop has diminished this season, and he’s lost 35 points on his batting average. An outfielder with a 670 OPS better score a shitload of runs (he doesn’t) and hit for a higher average for me to want those steals. Sorry all you Davis owners who tried endlessly to dump him on me this season. I’m just not that thrilled with what I see, especially since his batting eye has regressed this year, leading me to believe that last year’s .305 BA won’t be reappearing any time soon.

Coco Crisp has also enjoyed a career year on the basepaths for the A’s with 32 steals. Imagine how many he’d have if he could have stayed healthy and if his walk rate hadn’t dropped so steeply? Sheesh, Crisp might have around 65 steals by now. Still, Coco is enjoying his finest season since leaving Cleveland, so if he can stay healthy next year, you’ve got to consider him a very nice sleeper. Project his numbers over a full year, and it’s exciting. At his current pace, if Crisp had been able to play in 150 games this year, he would have topped 100 runs, hit 16 homers, driven in 76 and stolen 64 bases. Think about that come draft day next season depending on if the A’s pick up his option for 2011.

By RotoRob
This entry was posted on Sunday, September 19th, 2010 at 5:38 pm and is filed under BASEBALL, Fantasy Notes, RotoRob. You can follow any responses to this entry through the RSS 2.0 feed. You can skip to the end and leave a response. Pinging is currently not allowed.