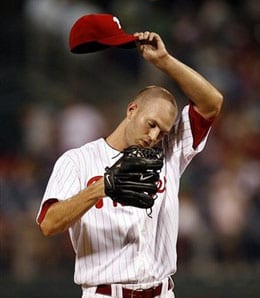 The inter-league trade deadline has now come and gone and with it a plethora of player moves that is certain to make the Fantasy owner a busy individual Sunday. For those playing in single league formats with weekly transactions, Sunday will be a day to break out the FAAB dollars and burn the waiver wire priorities that you’ve been sitting on for the first four months of the season. The opportunity is there to be doing some serious upgrading, especially in single format leagues, so without further ado, let’s get down to the business at hand — this week’s Wire Troll options.

J.A. Happ, SP, Houston Astros: The face lift in Houston continued with the acquisition of fastball pitcher Happ from the Phils. In his Astro debut Friday, he pitched six scoreless innings to beat the Brew Crew. By sheer coincidence, Happ posted much better results than Roy Oswalt — the player he was traded for — managed in his first start for Philly. Sure, it’s just one start for each, but those results have to make the Philly faithful just a tad cranky, you would assume. Last year, Happ was the runner up to Chris Coghlan in NL RoY voting, and a return to form after his early season injury woes makes him a solid addition in all formats heading into the dog days of summer.

Brett Wallace, 1B, Houston Astros: The ‘Stros didn’t waste any time getting their newest acquisition up to the majors and into the starting lineup with Wallace sliding into the first base slot, open after Lance Berkman was dealt to the Yankees. At the hitter’s paradise that is Triple-A Las Vegas, Wallace managed to blast 18 homers, drive in 61, and post a great .301 BA. Houston isn’t going anywhere this season so it will give its newest acquisition plenty of opportunities to display his much vaunted skill set down the stretch.

Dustin Moseley, SP, New York Yankees: Sergio Mitre couldn’t get the job done as the fifth starter for the Yankees and they’ve now turned the gig over to former Cincy first-rounder and former Angel Moseley. He managed a win over the Tribe Thursday, allowing just four hits and two free passes over six quality innings. Moseley is a band-aid solution until the return of Andy Pettitte towards the end of August, but in deep AL-only leagues that extra three or four starts could be a difference maker come year end.

Rick Ankiel, OF, Atlanta Braves: The Braves needed a power bat in their outfield and ended up with Ankiel at the trade deadline. He did manage to smack 25 long balls for the Cardinals just two seasons ago and if a trade from perennial doormat Kansas City to a contender in the heat of a playoff race isn’t reason to be motivated, nothing is.

Jeff Francis, SP, Colorado Rockies: In 18 IP since the All-Star break, the Canadian southpaw has allowed only four earned in runs and picked up victories in two of his three starts. He’s also put up a K per inning over this stretch, uncharacteristically high for him, considering his career K/9 is just over 6.1. Both the Rockies and your Fantasy squad could benefit from what appears to be a return by Francis to his 2007 form.

Jon Jay, OF, St. Louis Cardinals: The trade of Ryan Ludwick to the Padres has opened up playing time opportunities for Jay and in 115 at bats this season, he’s managed to smack three homers, drive in 12 runs, and hit to the tune of an incredible .383 BA. The Cards believe and so should you.

Ryan Kalish, OF, Boston Red Sox: The Red Sox DFA’d Jeremy Hermida Saturday, and are now pinning their hopes on 22-year-old top prospect Kalish, at least until the return of Jacoby Ellsbury. At Double-A and Triple-A, Kalish combined to swat 13 homers to go along with 47 RBI, 24 thefts and a solid .294 BA. He also has demonstrated great on-base skills as evidenced by a 42/53 BB/K ratio. He’s a great option in AL-only leagues and you should keep him on the radar in standard mixed leagues. Players with both his speed and power potential are few and far between.

Jake Westbrook, SP, St. Louis Cardinals: Will the magic of pitching coach Dave Duncan continue? In his return from Tommy John surgery this season, we have seen mixed results from Westbrook. However, under the tutelage of noted reclamation artist Duncan and with some offensive support — something a bit lacking in Cleveland — expect better results from Westbrook down the stretch, especially in the wins category.

Chris Perez, RP, Cleveland Indians: I’ve beaten the Perez drum for so long my hands hurt, so I’m not going there today, but did anyone not see this one coming?

Michael Saunders, OF, Seattle Mariners: In his past ten games, Saunders is batting .310 with one homer, five RBI, and a theft and, with regular playing time sewn up, he should be an asset in AL-only leagues down the stretch.

Logan Morrison, OF/1B, Florida Marlins: Who would have thought it would take a pie in the face to Wes Helms to give the 22-year-old phenom his shot in the bigs? Hell, if I had known that, I would have baked the pie myself! Morrison, whose sweet batting stroke really impressed me in the Futures Game, has sky-high potential written all over him and is a must-add in NL-only leagues.

Adam Kennedy, 2B, Washington Nationals: With Cristian Guzman traded to the Rangers, the 34-year-old Kennedy has the opportunity to reverse what has been a dismal four months in Washington.

Drew Storen/Tyler Clippard/Sean Burnett, RP, Washington Nationals: Matt Capps has been dealt to the Twinkies, creating another bullpen-by-committee scenario, but perhaps not for long. The closer-of-the-future is Storen, so expect him to take charge and move into the role on a full-time basis before season’s end.

Michael Wuertz/Craig Breslow, RP, Oakland Athletics: A strained intercostal muscle has landed closer Andrew Bailey on the DL, forcing the A’s into a bullpen-by-committee situation. If your Fantasy squad is in need of short-term help in the saves category, you could do much…err…Wuertz.

Jeremy Guthrie, SP, Baltimore Orioles: In 20 2/3 IP since the break, Guthrie has allowed a scent three earned runs and has struck out 15. The wins will be hard to come by as long as he’s still in Baltimore, but the peripherals could be of value in deep and AL-only formats.

Josh Bell, 3B, Baltimore Orioles: Is he ready? Probably not, but he’s got the job and as I’ve so often said, “with playing time comes opportunity.”

Ryan Madson, RP, Philadelphia Phillies: In Philly, they’ll be singing, “Another Saturday night and I ain’t got nobody” for a while. The Phillies could have — make that should have — upgraded their bullpen, and their failure to do so will come back to bite them in the ass, mark my words. Don’t overlook Madson as your Plan B if Brad Lidge goes south.

Evan Meek/Joel Hanrahan, RP, Pittsburgh Pirates: Hanrahan appears to be the early favourite for saves in Pittsburgh, but locking up both of these pitchers is in your best interest. Meek has enjoyed a phenomenal year in the Pirate bullpen, has future closer written all over him and is a useful Fantasy asset even if he isn’t earning saves.

Chris Snyder, C, Pittsburgh Pirates: Ryan Doumit is on the DL dealing with concussion woes and when he returns Friday, he’ll be the backup catcher while also playing some outfield and first base. Snyder has managed to smack 45 homers in limited at-bats over the past four seasons and with a full-time gig has the potential to be an asset in all two-catcher and NL-only formats.

Rich Harden, SP, Texas Rangers: Harden actually made it through seven quality innings Saturday without a trip to the DL — simply amazing!

Chris Getz, 2B, Kansas City Royals: The new lead-off hitter for the Royals?

Will Rhymes, 2B, Detroit Tigers: Well it would appear that my confidence in Scott Sizemore was a bit higher than that of the Tigers. Rhymes is your typical all-speed, no-power bat that will fill the void in Tigertown until the return of Carlos Guillen.

Jeremy Hellickson, SP, Tampa Bay Rays: He’s owned virtually everywhere and even if Joe Maddon has publicly stated he’s not getting a permanent rotation slot, you simply have to get this kid active for his MLB debut Monday.

Jason Repko, OF, Minnesota Twins: Repko did an admirable job filling in for Denard Span with both the stick and the glove, making him a worthy addition in deep AL-only leagues.

By Tim McLeod
Tags: MLB Trade Deadline
This entry was posted on Sunday, August 1st, 2010 at 2:09 pm and is filed under BASEBALL, The Wire Troll, Tim McLeod. You can follow any responses to this entry through the RSS 2.0 feed. Both comments and pings are currently closed.