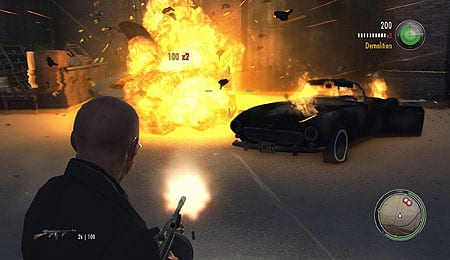 It didn’t take long for 2k to follow the release of Mafia II with the title’s first round of downloadable content, offering up Jimmy’s Vendetta on both Xbox 360 and Playstation 3. As you’ve probably surmised, you play as Jimmy, a man who “solved problems” for the mob before being double crossed and left to rot in jail. The add-on opens with your escape from prison, and now that you’re on the loose it’s time for a little old-fashioned payback.

Outside of the opening cinematic, however, there’s virtually no story. Missions are activated by walking up to a floating icon and pushing a button. From there you’ll be given a brief textual explanation of what you’re doing and why, though ultimately it’s of little consequence. Once you accept, a timer starts and you set about completing the task in the allotted time. Each mission is then scored based on how many enemies are killed, the number of headshots, score multipliers (earned by killing enemies or destroying vehicles in rapid succession) and time remaining.

The game contains 30 missions that essentially fall into either the action or driving categories. The action missions can be pretty fun, but the driving ones are universally dull. There’s virtually no challenge to any of them — you accept the assignment, walk to the nearby vehicle, pick the lock, drive it across the map and park. That’s it. There are no high-speed pursuits from the police or even an angry car owner. You simply go for a leisurely drive.

While the driving gets tiresome (you’ll do plenty of it going from one mission to the next as well since they’re so spread out) it doesn’t compare to the frustration when dealing with the cops during shootouts. Throughout the main game much of the gun fighting was confined to buildings and complexes with little interference from the police. That isn’t the case here. Numerous times I’d be engaged in a firefight with thugs only to be shot and killed by cops! The constant threat of police involvement hovers over some missions and can really choke the fun out of things.

Thankfully, Jimmy’s Vendetta ends strong with the most combat-heavy missions taking place in remote locations without Johnny Law’s involvement. These are on par with the best shootouts from Mafia II and are well worth playing through more than once.

If you enjoyed the combat in Mafia II and would like to spend additional time in Empire Bay in a less structured format, then Jimmy’s Vendetta is a quality purchase at 800 MS Points (US$9.99). Those looking for more of Mafia II’s excellent story development and new locations to visit will have to wait for the upcoming Joe’s Adventures to get their fix.

By Herija Green
This entry was posted on Friday, September 17th, 2010 at 11:34 am and is filed under Herija Green, Video Game Reviews. You can follow any responses to this entry through the RSS 2.0 feed. You can leave a response, or trackback from your own site.