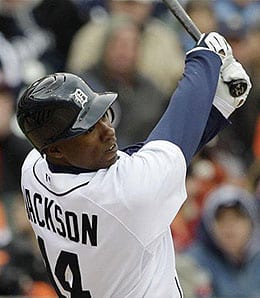 Free-swinging Austin Jackson is having an ROY-worthy season.

The last time we checked in on Austin Jackson, we speculated that he could be a top 10 outfielder by season’s end the way he was tearing it up. That certainly hasn’t transpired, but he’s still had a very productive, if inconsistent rookie season. Jackson has been quiet lately (1-for-14 over the past four games), but was red hot in September prior to this. I’m really doubtful he’ll be able to top Neftali Feliz for the AL ROY award based on the level of impact each has had on their respective teams, but clearly Jackson has been the best rookie position player in the AL, and he’s having a freshman season for the ages.

He’s scored 95 runs in 136 games, shown nice extra-base pop and has done a better job of drawing walks in recent weeks. The strikeouts – he leads the AL in that department – remain a problem, but that hasn’t stopped Jackson from swinging a .300 stick. Let’s see…developing power, nice speed, lots of strikeouts…does this remind you of another lead-off hitter Detroit had? Oh right…Curtis Granderson – the very player the Tigers sent to the Yanks to land the package that included Jackson. Assuming Jackson can rein in the Ks and up his walk rate in the coming years, he’s got the potential to be one of the better lead-off men in the game.

The mess that has been the 2010 New York Mets is expected to cost both General Manager Omar Minaya and Manager Jerry Manuel their jobs. Besides all the off-field drama that has helped seal the fate of these two, what went wrong with the Mets? Well, simply put, they haven’t been able to score runs (only Houston and Pittsburgh have scored less among NL teams). New York’s fielding has been solid, and the pitching staff, for the most part, has got the job done. But there were too many underperforming players that received too much PT.

Luis Castillo needs to go away; inconsistent Jeff Francoeur started well before fading, but was thankfully dealt to Texas; Carlos Beltran has been extremely slow to recover from off-season knee surgery and has looked like a shell of his former self (though, in fairness, he’s starting to come around this month). And the list goes on. You can definitely expect changes a-plenty for the Mets this offseason.

A couple of weeks ago, Tim speculated that struggling Red closer Francisco Cordero could lose some save opportunities to Nick Masset. But given how wildly successful Aroldis Chapman’s conversion to relief has gone, there’s plenty of talk that he deserves to close. I don’t disagree with the idea, but I don’t see it happening this season. The Reds are heading to the playoffs and I doubt they want to upset the apple cart that got them there. Besides, we all know that Cincy manager Dusty Baker has always been a veteran’s manager – as a rule, he’ll go down with the ship with his older players. Chapman could very well be closing games in the future, but I don’t think that future will arrive until 2011.

Back to the Big Apple, what’s the deal with the Yankees? They’ve gone just 6-8 in September (with just two wins over the last ten games) and have now fallen a half-game behind the Rays in the AL East. Fortunately for New York, Tampa Bay hasn’t exactly seized this opportunity to build up a big division lead, going just 7-6 in September. Yankee Manager Joe Girardi is coming under fire for the way he’s managing his bullpen and lineup as the team is still waiting to clinch a playoff spot, hardly an eventuality that’s in doubt, but with Boston starting to roll, it won’t be long before this team needs to peek over its shoulder.

By the way, what’s up with this team’s love affair with Chad Gaudin? Last season, he was awful for the Padres, but looked much better after getting dealt to the Yanks. This year, New York released Gaudin in Spring Training, he headed to Oakland where he gets shelled and subsequently DFAed, and the Yanks came calling again. And yet again, Gaudin turned things around in Pinstripes to the point where he actually has a modicum of value in a deep AL-only league. What’s up with that?

Jason Giambi got a rare start Wednesday night in the Rockies’ 9-6 win over San Diego. He drew a walk, but struck out three times in taking an 0-for-4. He’s actually been playing pretty well this month, producing three homers in 20 at-bats and he’s managed to have a decent season with an 800 OPS, but because of his extremely limited playing time, Giambi is only an option in a very deep NL-only league. He’ll turn 40 this offseason, and his days as an everyday player are clearly over. It’s just a matter of time before he hangs ‘em up, so it would be nice to see Colorado sneak into the playoffs so we can have one last look at Giambi in a prime-time situation.

Okay, so he doesn’t offer any Fantasy value whatsoever, but let’s give some props to Indian reliever Rafael Perez for turning things around this year after last season’s disaster. Tuesday, he tossed a shutout inning for his fourth straight scoreless outing, lowering his September ERA to a tidy 2.25. Perez has picked up 11 holds this season, which is a far cry from his big 2008 season, but it’s nice to see that he’s worked his way back into an important role in the Tribe pen.

Closer Chris Perez has really come into his own this season, so I can’t see Rafael earning saves any time soon, but if he can get his strikeout rate back to 2008 levels and nail down a seventh or eight inning gig, he could be useful next season in AL-only leagues that track holds. He’ll definitely need to improve upon that 1.55 WHIP before we see that, however.

By RotoRob
This entry was posted on Thursday, September 16th, 2010 at 2:22 pm and is filed under BASEBALL, Fantasy Notes, RotoRob. You can follow any responses to this entry through the RSS 2.0 feed. You can leave a response, or trackback from your own site.